The Children’s Commissioner for England has warned 210,000 homeless children are being housed in unsuitable temporary accommodation across the UK. 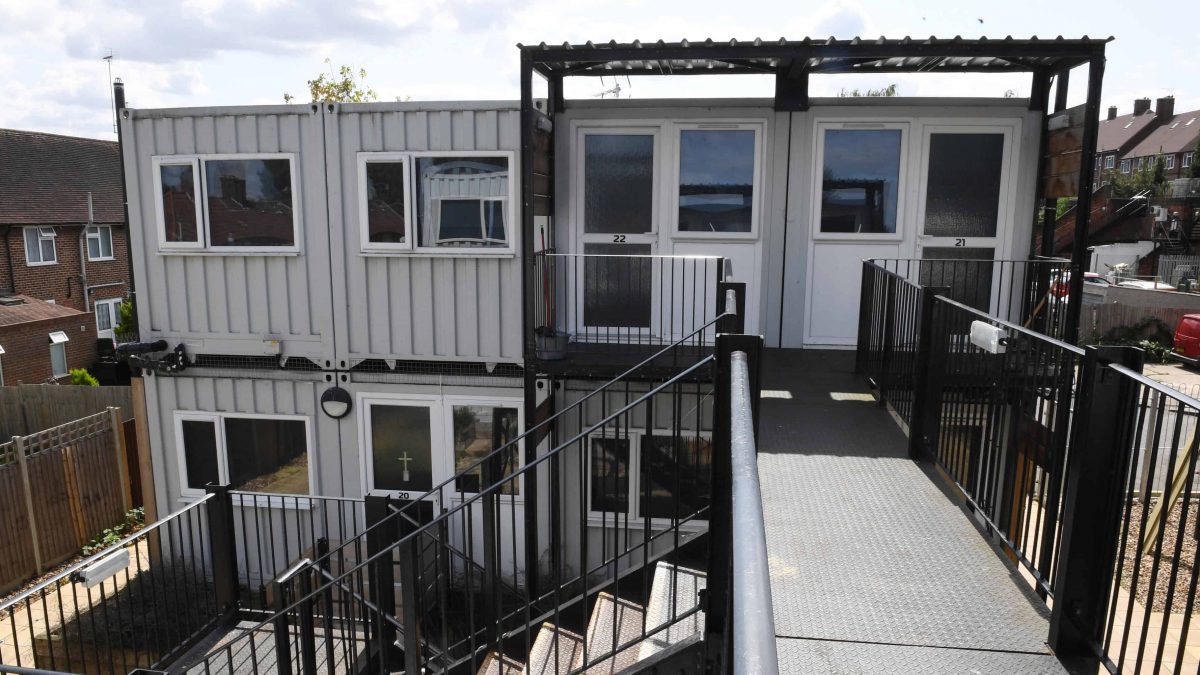 The Children’s Commissioner for England has warned 210,000 homeless children are being housed in unsuitable temporary accommodation across the UK.

This includes families being rehoused cheek by jowl in repurposed office blocks, cramped hostels and even families with children housed in shipping containers.

She warned children are spending months housed in metal containers of just 18 square metres blisteringly hot in summer and freezing in winter.

Children across the UK were being “robbed of their childhood” her damning report warned.

Families are spending months in “cramped and unsafe” conditions by living inside converted shipping containers used as temporary accommodation for the homeless.

Thousands of children are growing up in “dangerous” converted shipping containers and office blocks in “cramped conditions”, a report has found.

The Bleak Houses report by the Children’s Commissioner for England estimates there could be more than 210,000 children without a permanent home in England.

It warns that temporary accommodation is frequently not fit to live in and children are spending years in interim housing while they wait for an offer of permanent accommodation.

Some 124,000 youngsters are classed as officially homeless and living in temporary accommodation – plus around 90,000 in “sofa-surfing” families – but the report believes that the actual figures could be much higher due to a lack of data.

Shipping containers are being re-purposed for use as temporary accommodation, the report found, leading to cramped conditions and shifting temperatures during the seasons.

Some parents were concerned about anti-social behaviour in the surrounding areas, forcing them to keep their children inside the small units instead.

Residents living in converted container accommodation in Ealing, west London, told the PA news agency the units were prone to damp and mould and overheating.

Office blocks and warehouses are also being used as temporary accommodation for families, with at least 13 office blocks in Harlow, Essex, converted into more than 1,000 individual flats.

Some units in Templefields House measure 18 square metres and are being used to house whole families, with parents and children sleeping in a single room also used as the kitchen, the report found.

“No child should be spending months if not years living in a converted shipping container, a dodgy old office block or an emergency B&B,” she said.

“But a cocktail of punitive welfare policies, a woeful lack of social homes and wildly expensive private rents mean this is frighteningly commonplace.

“We constantly hear from struggling families forced to accept unsuitable, and sometimes downright dangerous accommodation because they have nowhere else to go.

“The devastating impact this has on a child’s development and wellbeing cannot be overstated.”

Children and families told of the “deeply disruptive impact” moving away can have, with some 23,000 families in 2018 housed in temporary accommodation outside of their home council area.

The Children’s Commissioner Anne Longfield also expressed concerns about B&Bs used as temporary accommodation, creating “intimidating and potentially unsafe environments” for children. “Something has gone very wrong with our housing system when children are growing up in shipping containers and old office blocks,” she warned.

The bathroom in B&Bs is often shared with other residents and vulnerable adults, including those with mental health or drug abuse problems.

Of the 2,420 families known to be living in B&Bs in December 2018, a third had been there for more than six weeks – despite this being unlawful.

Analysis in the report, released on Wednesday, found that in 2017, around two in five children in temporary accommodation had been there for at least six months.

The report warns that a further 375,000 children in England are in households that have fallen behind on rent or mortgage payments, putting them at financial risk of becoming homeless in the future.

Commenting on the report, Ms Longfield said: “Something has gone very wrong with our housing system when children are growing up in B&Bs, shipping containers and old office blocks.

“Children have told us of the disruptive and at times frightening impact this can have on their lives.

“It is a scandal that a country as prosperous as ours is leaving tens of thousands of families in temporary accommodation for long periods of time, or to sofa surf.

“It is essential that the Government invests properly in a major house-building programme and that it sets itself a formal target to reduce the number of children in temporary accommodation.”

A Government spokesperson said: “No child should ever be without a roof over their head and we are working to ensure all families have a safe place to stay.

“If anyone believes they have been placed in unsuitable accommodation, we urge them to exercise their right to request a review.

“We have invested £1.2 billion to tackle all types of homelessness, including funding a team of specialist advisers which has, in two years, helped LAs to reduce the number of families in B&B accommodation for more than six weeks by 28%.”

Ealing Council constructed a number of the “heavily modified” containers in west London to house vulnerable families who would otherwise be in B&Bs or other interim housing.

But those living in the steel containers – comprised of a small kitchenette, bedroom and shower room – have complained of overheating, hazards for young children and damp and mould.

Mother-of-two Corelle Tertullien was previously housed in a hostel in Southall, west London, and moved into a container in Hanwell shortly before she was due to give birth in December.

“When I got the phone call, he said, ‘oh, we have a flat for you’,” she told the Press Association.

“And then when I came here, I realised obviously this is not a flat. This is a shipping container.

“When they tell you, they make it out like it’s a flat or a house, but no, it’s a shipping container.”

A jigsaw of steel boxes with wood cladding form the 34 units in Marston Court, with one piled on top of the other to resemble a housing block or estate.

The 26-year-old, whose sons are aged two and nine months, was forced to move out of her family home due to overcrowding but has to keep her belongings elsewhere due to an absence of storage space.

She said: “We’re all sleeping in one bed at the moment because I can’t fit the cot in here, there’s no space.

“There’s no bathtub. Originally I was washing him (the nine-month-old) in the kitchen sink but now I wash him on the floor, getting a cup and washing him that way, because he’s too big to fit in the sink now.”

The lack of circulation in the metal storage containers means they are prone to overheating, according to Ms Tertullien, which leads to condensation dripping from the ceiling.

“The fan is never off, it is constantly hot in here. The only way is to have your door open but I don’t want to have my door open because I don’t want people to look inside,” she said.

“Most of the time they’re in their nappies because it’s just too hot.”

After almost nine months living in the container, the shop assistant is unsure when she’ll be moving into permanent accommodation.

She said another resident had been living in a container for three years.

“But to me, if it’s temporary accommodation, you shouldn’t be here for three years,” she added.

Another resident, who preferred not to be named, said she cried after arriving at the containers.

“The council put me in here,” she said.

“No-one wishes to live in a container, especially when you have kids.

“When I got here and saw all of this, the container, I was crying.”

A mother-of-one, the 29-year-old said the conditions inside the container were worse than in Eritrea and Sudan when she was living in a “normal house”.

She said: “Sometimes in here it’s damp with mould. Even making water for the tea, you have to open the window because of the steam.

An Ealing Council spokesman said: “Ealing Council was one of the first local authorities in the country to use innovative modular homes as temporary accommodation.

“Made from heavily modified shipping containers, the homes offer a stable, comfortable environment for vulnerable homeless families who have nowhere else to go.

“While we would rather offer people the opportunity to live in genuinely affordable permanent homes, the housing crisis means we have no choice but to use temporary accommodation to house the sheer volume of homeless households that present to us.”