"When corruption rules, the media is used as a mouthpiece for political influence," the campaign group said. 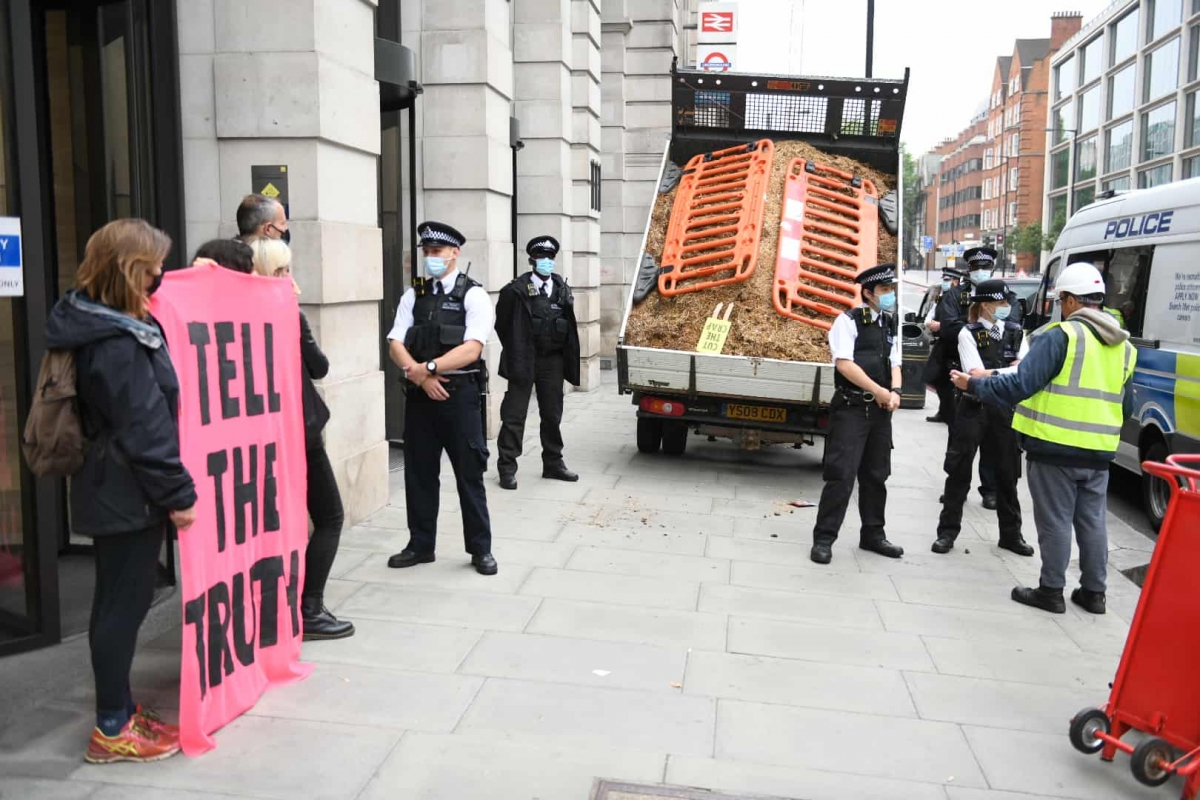 Extinction Rebellion have dumped seven tons of horse manure outside the main entrance to the Daily Mail Group offices at Northcliffe House.

The action kicked off a day of protest, sending a message to the four billionaire owners of 68 per cent of the UK’s print media – Rupert Murdoch, Lord Rothermere, Sir Frederik Barclay and Baron Evegeny Lebedev – to ‘cut the buillsh*t!’, demanding an end to media corruption that suppresses the truth from the public for profit.

The group left signs in the manure that read ‘CUT THE CRAP’ and held a banner that read ‘FREE THE PRESS’.

The action will be followed by a march beginning at midday in Parliament Square and proceeding along the Southbank to the News UK Offices on Bridge Street.

They will be joined by anti racist groups and organisations campaigning for media reform, such as Black Lives Matter groups and Media Reform Coalition.

Sunday’s action comes nine months after Extinction Rebellion blocked the entrance to the printworks on 5 September 2020, disrupting paper distribution for the day and sending a shockwave through the UK’s print media.

Since then, much has shifted in the media landscape, with many of the UK papers printed at Broxbourne claiming climate leadership while further contributing to delay and scepticism, and accusing climate activists of being ‘extremist nutters’ or ‘doomers’’.

Gully Bujak of Extinction Rebellion, said: “For the British public, who’ve seen the criminal behaviour of this government and their ‘cronies’ throughout the pandemic, the conclusion must surely be clear: the arenas of power in this country are rotten, and where the billionaire-owned press is concerned – corruption is the business model.

“It’s time they cut the crap and stop acting as though they are providing a noble service to the public, while greenwashing the climate crisis and stoking the culture war to divide people.

“The need for a truly free press in Britain has never been more evident or urgent than it is today. Until the press is free, and those in power truly accountable, we cannot consider ourselves to live in a democracy, and without a functioning democracy, we cannot hope to survive the multiple and devastating crises heading our way.”

The September blockade of the Broxbourne printworks was followed by powerful voices, such as the Home Secretary and Prime Minister, calling the action an attack on democracy and tweeting that “a free press is vital in holding the government and other powerful institutions to account on issues critical for the future of our country, including the fight against climate change.”

However, a YouGov poll commissioned by Extinction Rebellion following the action found that only a minority of adults in the UK think we have a free press and the majority believe that the concentration of press ownership in the UK is unacceptable.

On the same day as the action, the Council of Europe issued the UK government media freedom alert for threatening press freedom when the government blacklisted a group of investigative journalists and denied them access to information. Russia and Turkey were both issued with warnings in that same week.

“Concentrated ownership creates conditions in which wealthy individuals and organisations can amass vast political and economic power and distort the media landscape to suit their interests.

“Urgent action is needed both to remedy these high levels of concentration and to protect against further losses of media plurality and diversity. The coronavirus pandemic has made it clearer than ever how much we need accountable media institutions, run in the public interest, which help a divided society talk to each other and hold the powerful to account.

“Media institutions that act in the public interest, rather than the interests of politicians and governments, billionaire owners or powerful corporations. Without a media freed from corporate and government interests, democracy flounders and fails.”