Tom Walker speaks about the inspiration for his latest show. 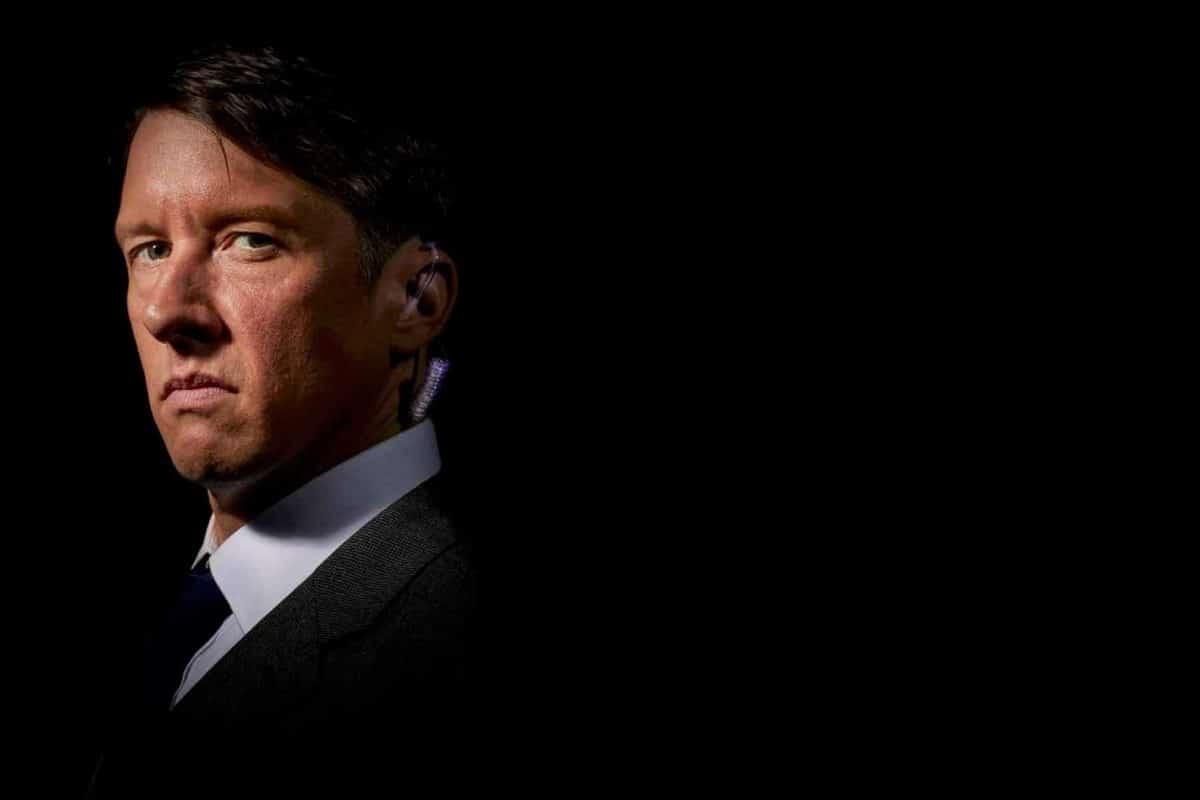 At some point on your social media timeline you will have come across the hot-headed, off-camera rantings of Jonathan Pie – a fictitious reporter taking aim at the current news agenda.

Created by political satirist Tom Walker, Pie has become something of a cult figure. Scathing and to-the-point, this rogue reporter has developed the perfect balance of delivering news while at the same time lambasting it.

Described by Rory Bremner as ‘the most important satirical creation since Partridge’, and with over 1.3 million Facebook followers, the ‘frustrated news reporter’ achieved millions of views, going internationally viral.

One of Pie’s earliest videos – his response to the election of Donald Trump – was viewed more than 150 million times worldwide. A recent clip at an Extinction Rebellion protest has been viewed over 6 million times on Facebook alone.

‘Woke’: The rise of cancel culture

Speaking exclusively to TLE after announcing new dates for his 2020 Fake News Tour, Walker spoke of his inspiration for his latest show.

“It centres around the idea of cancel culture”, he says.

Due to huge fan demand and a sell-out 2019 UK run of ‘The Fake News Tour’, Jonathan Pie announced at the end of 2019 that he would be extending the tour for a further run in spring 2020.

However, due to the COVID-19 pandemic, these dates were postponed last week.

“What’s surprised me having been thrown into the comedy world is how sensitive and self-censoring it is now. It’s become very woke since I’ve been doing it for the last four or five years.

“Political correctness and woke culture has certainly permeated the comedy world, and therefore as a comedian if you dare take the piss out of the excessiveness of the woke culture, you’re seen as a right-wing comic.”

The term ‘woke’ refers to an individual who is conscious of discrimination in society and other forms of oppression, and was brought into sharp focus during an appearance by actor Lawrence Fox on BBC Question Time during which he accused fellow panel member Rachel Boyle of being racist after branding him a ‘white privileged male’.

In challenging what he called “the rise of woke”, Walker also made reference to Alastair Stewart, the former ITV News presenter who quit after what ITN had described as an “error of judgement in [Alastair’s] use of social media”.

His departure was believed to be related to a social media spat in which Stewart sent a Shakespearean quote to a black Twitter user including the phrase “angry ape”.

“What happened to [Alastair] is pertinent to what the show is about. There is no doubt in anyone’s mind that that tweet was not intended as a racial slur. It was just interpreted as such. It may have been misjudged, but he never intended for the quote to be interpreted that way.”

Brexit, the climate crisis, austerity, social media, cancel culture and of course, now, COVID-19 – Jonathan Pie has thrown aside any red lines on the subject matter covered in this explosive show; a ‘lecture-come-apology-tour’, which follows an unfortunate on-air gaffe made by the irate news reporter.

“So, the plot of this show is the idea of cancel culture, the idea that Pie has done something that is really inappropriate of which there is no doubt, especially live on air.

“What we then learn is that the Twitterati decide to destroy his career and Pie is essentially on the road and calls it his apology tour trying to make sense of his career.”

He added: “And as his career and personal life have careered off the rails, so has the UK. There are also parallels to the Brexit chaos.”

The Fake News Tour will see Jonathan Pie returning to the road in a post-coronavirus world to berate the people in power – and the journalists apparently holding them to account.

Asked whether negative comments of his work has ever discouraged him from taking aim at certain topics, Walker replied: “I’ve found that the more successful I’ve become, the more censorious I’ve become, because you’ve got more to lose.”

Contrary to the image that Walker has cultivated for Pie, that of a disgruntled correspondent not afraid to speak his mind when he encounters what he perceives as “blatant hypocrisy”, there are certain areas that he stays well clear of.

“The one that springs to mind is the gender and transgender debate,” he says.

For Walker, “if you dare to even have a discussion about that, you’re deemed to be a bigot and transphobic – even to just want things explained to you. There are elements of that debate that are right for satire, but I wouldn’t go there because it is too open to misinterpretation.”

Contrary to popular belief, Walker is cautious about the use of social media.

“Social media is what made me, and I’m sure it’s what will spark my downfall. I’m seen as a political satirist, and politics is seen by its very nature as divisive. All I’m doing is fictionalising a potential political outlook, and I’m putting it in fictional terms.

“But by virtue of it being a political opinion, people are either going to agree or disagree with it – so of course the comedy I do is always going to be open to people getting angry about it.

“But also there are just some vile people out there, and Twitter is full of them,” he says.”

The end of free speech

Walker explains that while he may not agree with the politics of those he frequently lambastes, he feels that free speech on all sides of the political spectrum is under threat.

“When you’ve got universities no-platforming the likes of Amber Rudd, tell me there’s not a free speech problem on university campuses and I will not believe you.”

Walker was quick to point to the controversial incident in which Conservative MP and now Leader of the House of Commons, Jacob Rees-Mogg, was interrupted by masked individuals in an angry confrontation between audience members and protestors.

“People just assume that you’re at an event, such as that, because you’re some nasty right-winger. But actually I’d go and listen to Rees-Mogg speak to see what he sounds like and to see what he’s got to say for himself.

“And more than likely he would confirm what we already know, that he’s a posh, entitled dick.”

For Walker, the ramifications of ‘cancel culture’ are more deep-rooted.

“I do think that free speech is also under threat in comedy. That I have been branded right wing by some people, and right wing these days is the worst insult you can throw at someone.

He added: “There aren’t any right-wing comics around, and I am not one. The reason there aren’t any is because they don’t get any work. But to brand me right wing people are essentially trying to stop me from working and to write jokes that only they like.”

Despite being a ‘Corbynista’, Walker admits that it has become harder and harder for Pie to “like Corbyn” since his lack of clarity surrounding Brexit which contributed to the party’s questionable performance in the December 2019 general election.

“I knew it was inevitable. I knew that we were going to leave the EU at some point and by spending three or four years sitting on the fence essentially handed Boris Johnson the keys to No. 10 with a huge majority. That was Labour’s strategy.

“Unfortunately, that’s what Corbyn’s legacy is. You would have hoped that he would have pulled Labour back towards the left, which would have been a reasonable legacy – but I fear it will go to centre and become as woke as it possibly can.

“There’s something slightly sad and embarrassing in him still being at prime minister’s questions, I’ve got to be honest. We haven’t had an effective opposition for a long time.”

Speaking about Labour frontrunner, Sir Keir Starmer, Walker says: “ When [Starmer] suggested that he would put in for another referendum to see if we wanted to rejoin the EU, I asked myself whether he had learnt nothing from the election. Was he not aware that many, many traditional Labour voters voted for Brexit because they genuinely wanted it.”

And he suggests that the Labour leadership contest is of very little interest.

“The funny thing is no one gives a shit about who becomes the next Labour leader, it is so far down the list of priorities even before Coronavirus.”

While he respects the wishes of those who voted to Leave in the 2016 EU Referendum, Walker explains that it will take a long time to recover from that historic vote.

“It’s the worst possible Brexit we could have asked for. We’re having Brexit by people who would genuinely prefer if we just crashed out with no deal in place.”

“We are now just a small island, adrift, that no one gives a shit about. No one cares about Brexit other than us. I think it will take a long time to recover”.

For Walker, there are links to Brexit and coronavirus.

“Look at our reaction to the coronavirus, it’s as if Boris is being contrary and that somehow we’re going to do things differently because we’re not in Europe anymore.

“I think it will take a long time to recover. But what is weird is that events continue to happen. But with coronavirus we will face a different landscape in six months’ time compared to how it’s ever been.

“I hope that we’ll regain some fucking respect.

“But now for another decade Boris and his cronies can use coronavirus to blame the poor state of the economy, not the doldrums of Brexit.”

Asked whether he would support an instance of the UK rejoining the EU, Walker says: “I would, but you’re going to have to give it time. And then we’d see where the EU is at then.”