Floating plastics quickly build a coating of algae and microorganisms that smells edible to the marine reptiles, reveals new research 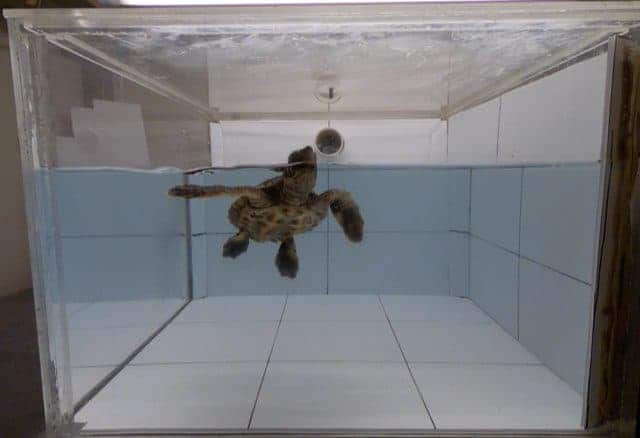 Turtles eat plastic floating in the ocean because it smells like food, according to a new study.

Marine plastic debris is threatening sea turtles around the world, mostly through ingestion and entanglement.

It has long been thought that the reptiles visually mistake plastics for prey, such as jellyfish.

But now American researchers have found that turtles are mistaking the scent of rotting plastic for food.

Study author Dr Joe Pfaller, of Florida University, said: “We found that loggerhead sea turtles respond to odours from biofouled plastics in the same way they respond to food odorants, suggesting that turtles may be attracted to plastic debris not only by the way it looks, but by the way it smells.”

He added: “This ‘olfactory trap’ might help explain why sea turtles ingest and become entangled in plastic so frequently.”

They found that turtles ignored the scents of clean plastic and water, but responded to the smells of food and ocean-soaked plastics by showing foraging behaviour.

This included poking their noses out of the water repeatedly as they tried to smell the food source, and searching more actively.

The team found that floating plastics quickly build a coating of algae and microorganisms that smells edible to the marine reptiles prompting their lethal attraction.

Kayla Goforth, a doctoral student at North Carolina University said: “Very young turtles feed at the surface, and older turtles feed further down in the water column, sometimes on the ocean bottom.”

But she added: “Regardless of where plastics are distributed in the ocean, turtles are likely to eat them.”

The researchers said their findings paint a more complicated picture around the dangers of ocean plastic than was previously thought.

Dr Pfaller said: “The plastic problem in the ocean is more complex than plastic bags that look like jellyfish or the errant straw stuck in a turtle’s nose. These are important and troubling pieces to the puzzle, and all plastics pose dangers to turtles.”

Sea turtles are increasingly washing up ill on beaches after swallowing plastics, prompting scientists to uncover what attracts them to the waste.

“There also are increasing reports of sea turtles that have become ill and stranded on the beach due to their ingestion of plastic.”

The researchers said their study, published in the Current Biology journal, raises concerns for all ocean species, not just sea turtles.

Prof Lohmann said: “One concern this study raises is that dense concentrations of plastics may make turtles – or other species – think the area is an abundant source of food.

“These areas may draw in marine mammals, fish and birds because the area smells like a good foraging ground.”

He added: “Once these plastics are in the ocean, we don’t have a good way to remove them or prevent them from smelling like food.

“The best thing we can do is to keep plastic from getting into the ocean at all.”

They also advised people to buy larger containers of drinks instead of numerous small drink containers held together with plastic rings which often trap sea life.

The researchers said future studies are needed to better understand which smells pique the turtles’ interest.