One fan who was at Wembley is now self-isolating, and said that “pretty much everybody” had caught the virus. 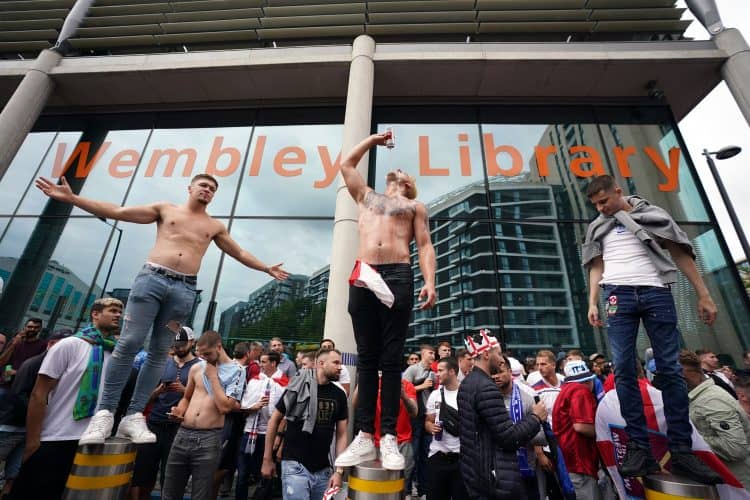 England football fans have been testing positive for Covid-19 in their droves following the Euros final on Sunday night.

Fans told the i newspaper that “pretty much everyone” they knew who went to Wembley for the match had contracted the virus or was self-isolation. The large number of positive cases after England’s heartbreaking loss has led people to dub the illness “the Wembley variant”.

The final, which was part of a government trial to test the safety of large-scale public events, saw 60,000 fans attend the stadium with no social distancing or masks following negative test results.

But thousands more congregated outside – and streams of ticketless fans breached security to storm the ground without tickets.

One fan who was at Wembley is now self-isolating, and said that “pretty much everybody” he’d spoken to who attended the game had caught the virus.

Sam, whose name has been changed to protect his anonymity, said “handfuls of people had been testing positive throughout”.

He added that several fans had tested positive – but attended the match anyway. “If you test positive the day before the final, would you have missed it? I know a couple admitted that they did.”

Another fan said that his whole group had tested positive with the so-called “Wembley variant”.

One England fan said he had taken a PCR test on the Friday before the match, attended the match on Sunday after recording a negative lateral flow result, and then tested positive on Monday.

“Goodness knows who got it off me, crammed like sardines in Wembley Park after the game Sunday and the Tube itself and the trains,” they wrote on a Facebook group.

Public Health England has urged people to “be sensible” ahead of the lifting of coronavirus restrictions – and called for regular testing.

“As more restrictions lift on Monday, we must remember that Covid-19 has not gone away, you could become severely unwell or pass on the virus to someone without knowing. Case and hospitalisation rates continue to rise. We must all be sensible,” said Dr Yvonne Doyle, Medical Director at PHE.

“We should all continue to get tested twice a week and anyone who has symptoms should seek a test immediately and stay at home while they await their result.”