Just over 100 cases of the South African strain have been identified to date across the UK, but this is the first signal of wider community spread. 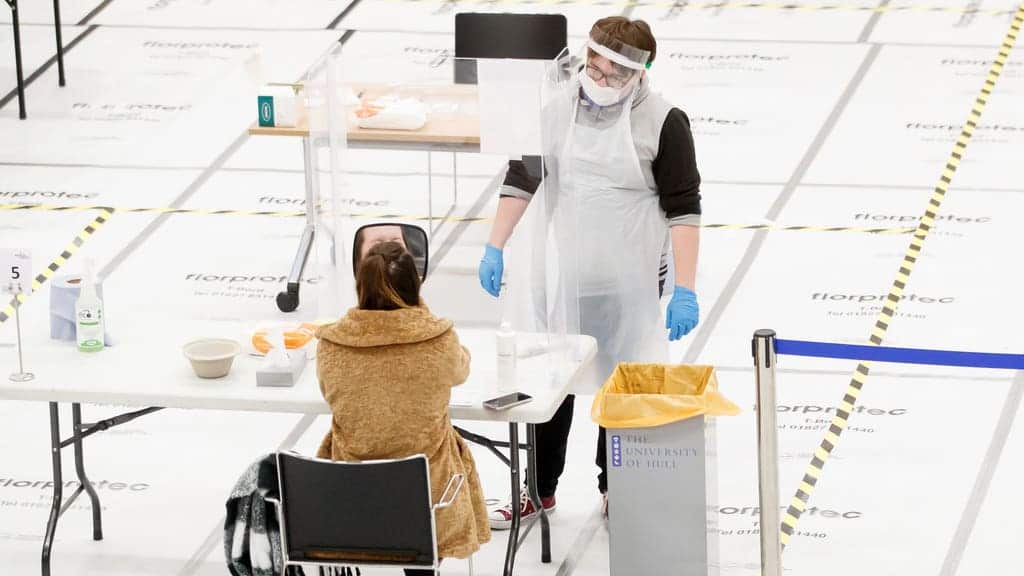 Residents in parts of England are to be urgently tested for Covid-19 after it emerged that the South African strain of the virus may have started spreading in the community.

There have been 11 cases of the variant identified across England with no links to travel.

Two positive cases of the strain – which have been worrying scientists – have been identified in people in Surrey with no links to travel or previous contact with those affected.

Ealing Council has also asked residents living and working in parts of Hanwell and West Ealing to get a Covid-19 test after a local resident tested positive for the South African strain, also with no travel links or previous contact.

In Kent, one case has also been identified with no previous links, meaning door-to-door coronavirus testing in the ME15 area of mid-Kent has now started.

Households within the ME15 area will be visited by staff from Kent Police, Maidstone Borough Council, Kent Fire and Rescue and other support agencies.

So far, just over 100 cases of the South African strain have been identified to date across the UK, but this is the first signal of wider community spread.

Residents within the affected areas will be asked to carry out a test even if they have no symptoms.

Some of the vaccines in use and currently going through approval have shown some effectiveness against the variant.

Surrey County Council said the Surrey Local Resilience Forum is working with Public Health England (PHE) and the Department of Health to carry out a localised “surge testing” programme in the Goldsworth Park and St Johns areas of Woking.

The council said in a statement: “This will enable us, working closely with PHE, NHS Test & Trace and the Joint Biosecurity Centre to closely monitor any community spread of the new variant, and restrict further transmission.”

A similar surveillance exercise is expected to extend into an area of Egham in the county.

There is currently no evidence that the variant causes more severe illness.

Ruth Hutchinson, director of public health for Surrey, said: “This is a precautionary measure – the more cases of the variant we find, the better chance we have at stopping it from spreading further.

“It’s really important to say that there is currently no evidence that this variant causes more severe illness, so you don’t need to worry.”

Dr Alison Barnett, regional director at Public Health England South East, said: “I urge everyone offered a test to take it up to help us to monitor the virus in our communities and to help suppress and control the spread of this variant.”

It comes as Boris Johnson played down fears about vaccines being ineffective against different variants.

During a visit to the Al Hikmah vaccination centre in Batley, West Yorkshire, the Prime Minister told reporters: “We are confident that all the vaccines that we are using provide a high degree of immunity and protection against all variants.”

He said the vaccines could be adapted to deal with new variants if necessary.

“We are going to be living with Covid for a while”

“The fact is we are going to be living with Covid for a while to come in one way or another,” he added.

“I don’t think it will be as bad as the last 12 months – or anything like – of course, but it’s very, very important that our vaccines continue to develop and to adapt, and they will.”

Mr Johnson said there were signs the lockdown measures were working but it was too early to “take your foot off the throat of the beast” by easing restrictions.

“We are starting to see some signs of a flattening and maybe even a falling off of infection rates and hospitalisations,” he said.

“So the risk is if you take your foot off the throat of the beast, as it were, and you allow things to get out of control again then you could, alas, see the disease spreading again fast before we have got enough vaccines into people’s arms. That’s the risk.”

Mr Johnson was asked if borders could fully reopen once the adult population is vaccinated and if the vaccines were shown to be good enough to deal with mutant strains.

“What I don’t think people want to see is a speedy relaxation that leads to an upsurge in the virus and I think everybody understands the need for tough border controls whilst there is a risk of new variants coming in.

“We want to take no risks with our borders.”

But Mr Johnson has said he was “optimistic” that people will be able to enjoy a summer holiday this year if the virus can be kept under control.

“I don’t want to give too much concrete by way of dates for our summer holidays,” he said.

“I am optimistic,  I understand the reasons for being optimistic, but some things have got to go right.

The Prime Minister said the rollout of the vaccination programme had been “phenomenal” but said it was “too early to say” whether social distancing might need to stay in place for the rest of the year.

He said: “I think we’re going to live with Covid for a very long time and that may change all sorts of behaviours, but I think it’s just too early to say.

“I think we need to wait and look at what the data is showing us about the effectiveness of the vaccines and what kind of protection it’s giving the whole population.

“So I think people are optimistic right now, and I share that, but we’ve just got to wait and see, and the next two or three weeks, by the end of February certainly, we will know a lot more about what vaccination means for long-term protection and what that means for our ability to open things up.”

When asked about whether sending vaccines to other countries would affect the UK’s ability to vaccinate its priority groups by spring, Mr Johnson said the UK would concentrate its supply on vaccinating in the UK.

But he added: “There’s no point in having a vaccination programme that exclusively concentrates on your own country and then says ‘that’s it’.”