"It's sad to say, but women are being failed by a woman in charge", one person said. 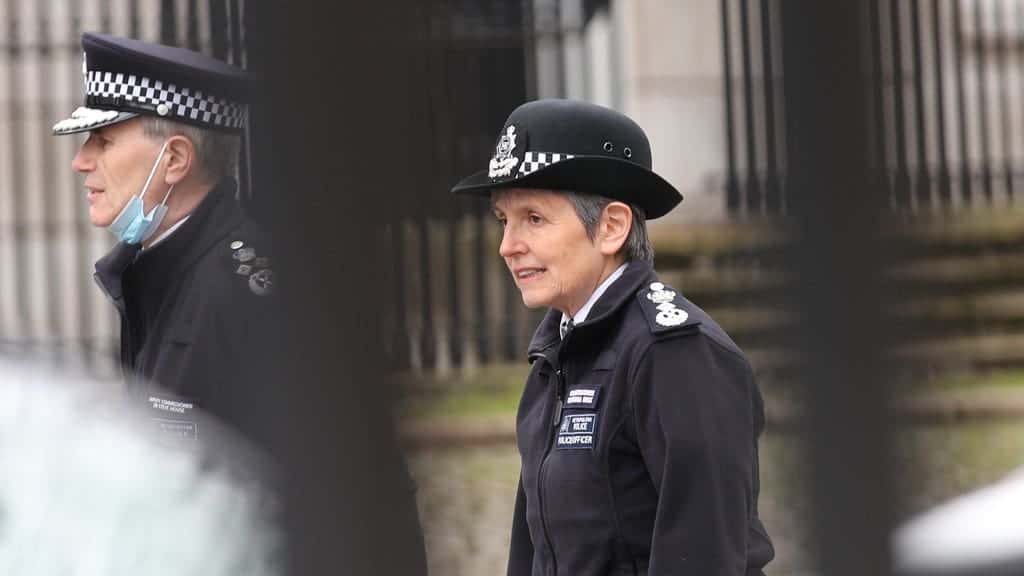 The head of the Metropolitan Police has said she will not stand down despite calls for her to quit over her force’s actions at a vigil in memory of Sarah Everard.

Dame Cressida Dick said what happened to the 33-year-old “appals me” and made her “more determined, not less” to lead the organisation.

She welcomed the Home Secretary’s request for an independent investigation into the events – which she described as “fiendishly difficult policing”.

In ugly scenes on Saturday night, officers clashed with crowds who had gathered on Clapham Common to remember the marketing executive.

Dame Cressida said: “What happened to Sarah appals me. As you know, I’m the first woman commissioner of the Met, perhaps it appals me, in a way, even more because of that.

“What has happened makes me more determined, not less, to lead my organisation.

“I’ve listened to what people have been saying in the last week, I know that in the streets all across the UK women don’t feel as safe as we would all like women to feel. I am utterly determined.”

She said that “all the women and men of the Met are outraged at what has happened and they’re working as hard as they can to get justice for Sarah”.

“In that context, none of us would have wanted to see the scenes we saw at the end of yesterday’s events,” she added.

Earlier on Sunday, Priti Patel asked the Chief Inspector of Constabulary to conduct a “lessons learned” review into the events.

The Home Secretary spoke with Dame Cressida, having received her report into the police’s actions at the vigil.

But “in the interest of confidence in policing” Ms Patel asked Sir Thomas Winsor to conduct an independent review into what happened, a Government source told the PA news agency.

London mayor Sadiq Khan also said he would be asking HM Inspectorate of Constabulary and the Independent Office for Police Conduct to look into the events.

The mayor said the scenes at the vigil were “completely unacceptable” despite having received assurances from Scotland Yard last week that the vigil would be policed “sensitively”.

He said: “I asked the Commissioner and Deputy Commissioner to come into City Hall today to give me an explanation of yesterday’s events and the days leading up to them. I am not satisfied with the explanation they have provided.

“I will now be asking Her Majesty’s Inspectorate of Constabulary [HMIC] to conduct a full independent investigation of events yesterday evening and in previous days. I am also asking the Independent Office for Police Conduct [IOPC] to investigate the actions of police officers yesterday evening.

“It is vital that these events are not allowed to undermine the powerful calls since Sarah’s murder for meaningful action to finally stop men inflicting violence on women.

“It was clear before yesterday that there isn’t adequate trust and confidence from women and girls in the police and criminal justice system more widely. Further steps must now be taken to address this.”

Dame Cressida has faced calls to resign after the clashes in which her force’s officers were seen grabbing several women and leading them away in handcuffs.

‘Dick out’ was trending on Twitter this afternoon. Here’s what people had to say:

Getting rid of Cressida Dick is one thing, having Priti Patel appoint her successor is something else entirely.#DickOut

Big shout out to the Met police this morning who are keeping our streets safe from women holding vigils and candles.#Dickout#arrestyourown

The Metropolitan Police have issued a statement explaining that the women were basically asking for it.#metpolice #DickOut

Let me get this straight? If the nurses who protested about pay, and the women who held a vigil last night in #ClaphamCommon were MALE football fans with no masks, they’d have been supported and no arrested? 6 days apart, questions need to be answered. Cressida times up #dickout pic.twitter.com/c8w86RBFL7

Fuckinghell, the streets of London were dangerous last night ?

there was a place for the police at Clapham Common tonight. It was to quietly and respectfully ask people to observe social distancing and to act as marshalls.

It's sad to say, but women are being failed by a woman in charge.