The jury deliberated over parts of two days in a city on edge against another outbreak of unrest. 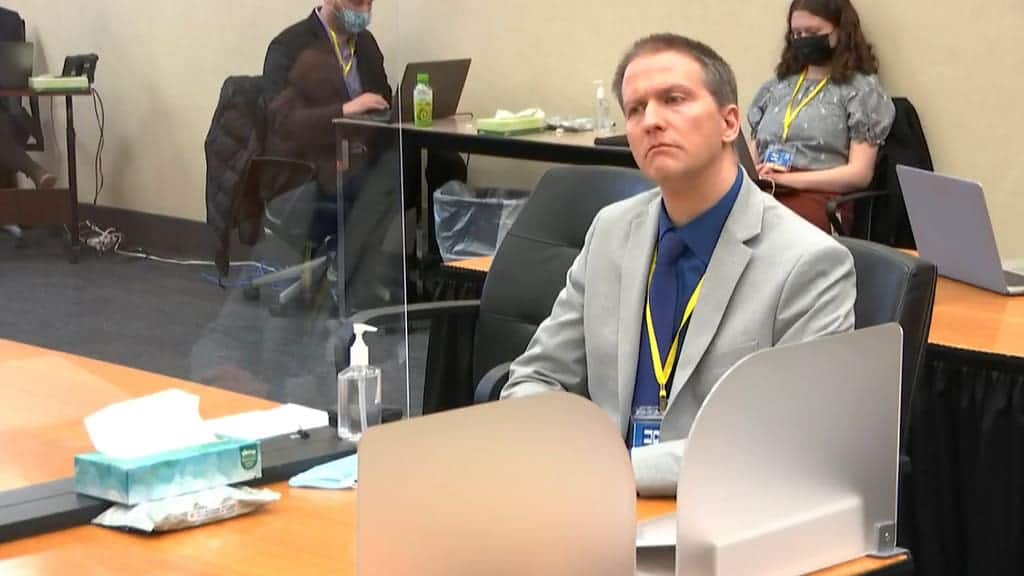 Former Minneapolis police officer Derek Chauvin has been convicted of murder and manslaughter for pinning George Floyd to the pavement with his knee on the black man’s neck.

Chauvin, 45, could now be sent to prison for decades.

The jury of six white people and six black or multi-racial ones came back with its verdict after about 10 hours of deliberations over two days.

Derek Chauvin is handcuffed and led out of court pic.twitter.com/RF163AcwLO

Outside the courthouse there was a jubilant reaction, with Jenny Yang tweeting this is not just “this moment, it’s the movement”.

the reaction to the verdict at George Floyd Square ???#DerekChauvinTrial pic.twitter.com/sxZUoukpyz

While Hilary Clinton said George Floyd’s family and community got the “accountability” they deserve.

George Floyd's family and community deserved for his killer to be held accountable.

Today, they got that accountability.

Chauvin’s face was obscured by a Covid-19 mask, and little reaction could be seen beyond his eyes darting around the courtroom.

His bail was immediately revoked and he was led away with his hands cuffed behind his back.

The verdict was read in a courthouse ringed with concrete barriers and razor wire and patrolled by National Guard troops, in a city on edge against another round of unrest — not just because of the Chauvin case but because of the deadly police shooting of a young black man, Daunte Wright, in a Minneapolis suburb April 11.

The jurors’ identities were kept secret and will not be released until the judge decides it is safe to do so.

Three other former Minneapolis officers charged with aiding and abetting murder in Mr Floyd’s death will stand trial in August.

Mr Floyd, 46, died May 25 after being arrested on suspicion of passing a counterfeit 20 dollar bill for a pack of cigarettes at a corner market. He panicked, pleaded that he was claustrophobic and struggled with police when they tried to put him in a squad car. They put him on the ground instead.

Related: Plan for White House-style briefings scrapped despite £2.6m being spent on venue