'I mean, is the Queen sort of ‘harbouring’ Prince Andrew now? On a Crown Estate? Is this fine?' Wondered comedian Katy Brand. 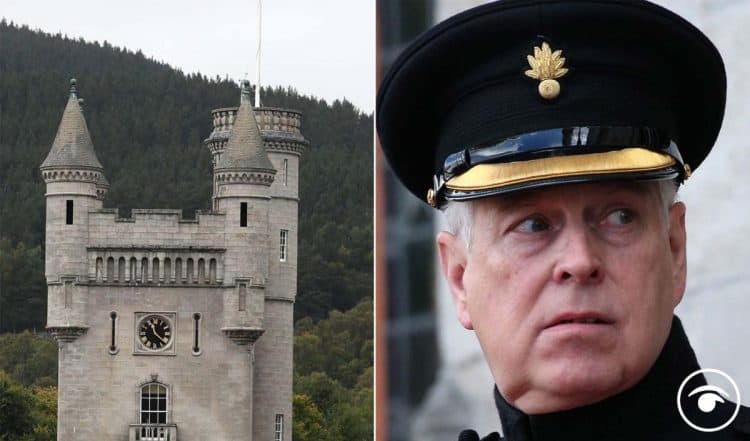 Under fire, Prince Andrew is ‘utterly convinced’ he can brush off rape allegations and think he will return to public life as soon as the Queen’s Platinum Jubilee next year, royal sources have reportedly claimed.

He is facing a civil legal claim he sexually abused Jeffrey Epstein’s former sex slave Virginia Giuffre when she was 17, which he categorically denies.

Yesterday he was pictured travelling to the Queen’s Balmoral estate in Scotland.

It is thought he bolted to his mother’s Scottish residence after Giuffre’s legal team reportedly attempted to deliver court papers to his doorstep in Windsor.

He is now set to stay at the 50,000 acre estate while the case is heard, after making the 500-mile round trip there with ex wife Sarah Ferguson joining him for support.

But despite finding himself in a ‘tsunami of s***’, royal sources were quoted in the media saying the prince is in a ‘buyout mood’ and believes the scandal will soon ‘blow over’.

A source close to him told The Mirror: ‘It is clear he (Andrew) has a clear and burning desire to return to work as soon as possible.

‘That may look entirely impossible but if anything he’s become emboldened in recent weeks and remains utterly convinced he will not only be exonerated but will certainly forge a way back to public life.

‘Certainly he has given the incredibly bullish impression that this will all blow over within a short while, rather than become a protracted issue.’

I mean, is the Queen sort of ‘harbouring’ Prince Andrew now? On a Crown Estate? Is this fine?

Boris Johnson has spent last weekend as a guest of the Queen at the royal estate at Balmoral, Downing Street has confirmed.

The Prime Minister’s official spokesman said Mr Johnson arrived on Saturday before returning to London on Monday, but declined to go into further details.

“The PM was in Balmoral over the weekend. It was an entirely private visit,” the spokesman said.

The spokesman declined to confirm reports that the Prime Minister was accompanied by his wife, Carrie, and their 16-month old son, Wilfred.

The couple last visited the Queen’s Scottish retreat in 2019 – last year’s trip was cancelled due to the Covid pandemic.

It is reported that this year’s visit was the 95-year-old Queen’s first opportunity to be introduced to Wilfred.

She has been staying at her private Scottish estate, where she traditionally spends her summer break.

Related: On the lamb? Prince Andrew flees to Balmoral ‘to avoid being served sex assault papers’