Are you Team Piers or Team Bozo? 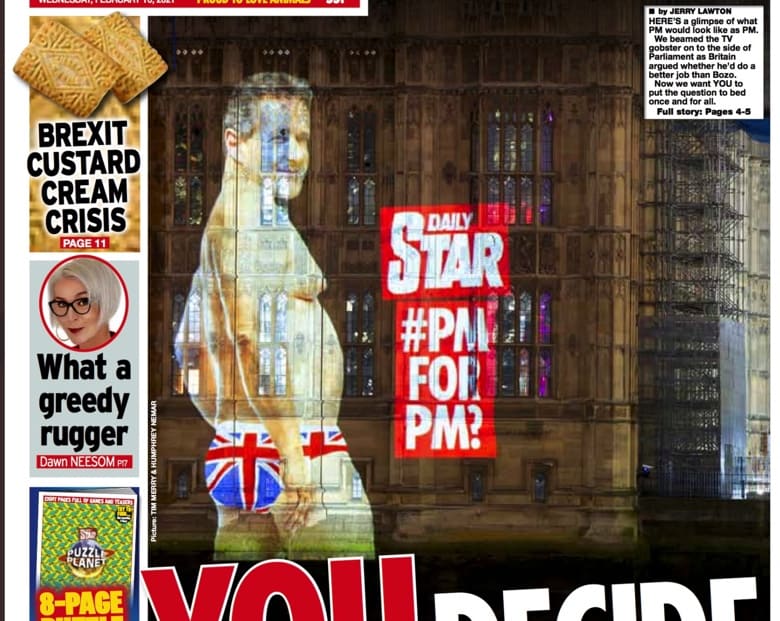 A picture of Piers Morgan wearing nothing but Union Jack pants was projected onto the Houses of Parliament last night as the Daily Star upped the ante on its #PMFORPM campaign.

The Good Morning Britain host was tipped to replace Boris Johnson as Prime Minister after holding politicians to account throughout the coronavirus pandemic with his no-nonsense approach.

Such is the ferocity of his take-no-prisoners interview style the government observed a 200-day boycott of the show as he put ministers bang to rights over their handling of the escalating Covid crisis.

Polling by Ipsos MORI showed that the GMB presenter was doing a better job at holding the government to account than Labour leader Sir Keir Starmer, with Paddy Power giving odds of 10/1 that he will become an MP by the end of this year.

And now the Daily Star has taken it one step further by beaming Morgan onto the side of Westminster itself.

Wearing nothing but Union Jack briefs he was projected on as the paper asks ‘are you Team Piers or Team Bozo’ in a front page story.

A poll has also been set up for people to cast their vote which you can find here.

Related: ‘Beans on Weetabix’ becomes an international incident as embassies get involved