SAGE scientists have warned opening up by Easter would result in tens of thousands more deaths and overwhelm hospitals with Covid patients. 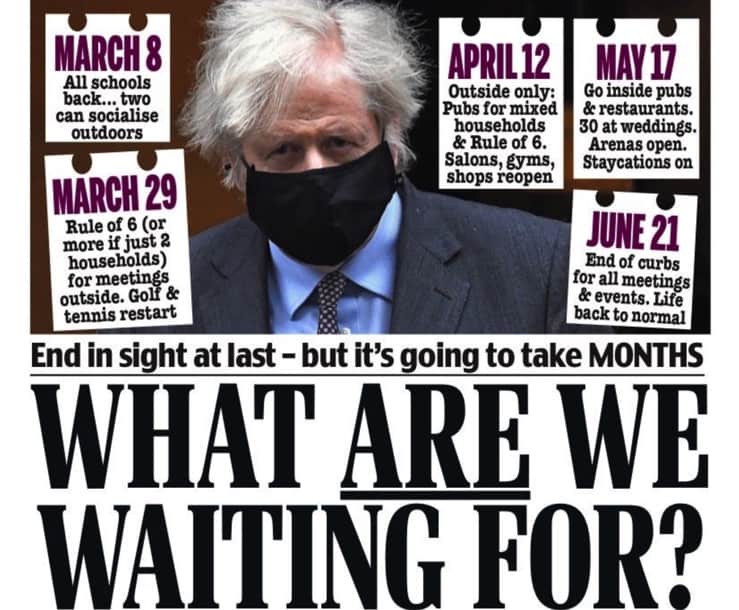 The Daily Mail bemoaned the UK’s “long road to freedom” on its front pages today – despite SAGE scientists warning that a premature lifting of lockdown restrictions would cause 91,000 extra deaths.

A four-stage plan set out by Boris Johnson could see England’s coronavirus restrictions finally lifted by the end of June, with the first easing of restrictions to be rolled out in early March with schoolchildren returning to school and limited outdoor socialising allowed.

By 21st June at the earliest, it is hoped that all remaining restrictions on social contact will be lifted, allowing larger events to go ahead and nightclubs to finally reopen.

But not everyone was happy with the cautious route out of restrictions.

Nigel Farage tweeted “Easter is cancelled” shortly after the announcement, while the Daily Mail ran a front cover that has been dubbed “pro-death propaganda” by one person on social media.

As I was saying.

Government scientific advisers have warned that opening up by Easter would result in tens of thousands more deaths and overwhelm hospitals with Covid patients.

Models predicted it would lead to nearly 60,000 Covid patients in hospital by June, compared to last month’s high of 39,000.

Chief Scientific Adviser Sir Patrick Vallance spoke of his support for the gradual approach taken by PM Boris Johnson, saying: “The sooner you open up everything, the higher the risk of a bigger resurgence.

“The slower you do it, the better.”

Even under the scenario that most closely matches the government’s roadmap, with restrictions lifted later, models predict a resurgence of the virus in September and 30,000 more deaths by summer 2022.