The paper's forgiving position seems out of step with the British public, three-fifths of whom think Boris and Rishi should resign. 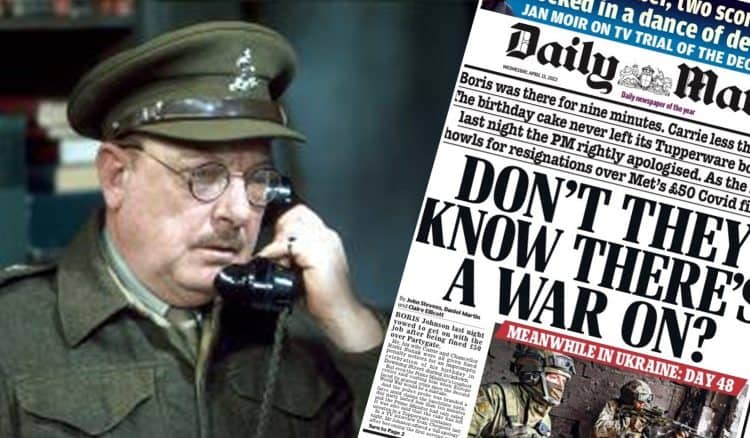 The Daily Mail jumped to Boris Johnson’s defence today with a front-cover splash that wouldn’t look out of place in a Dad’s Army episode.

Channelling their inner Captain Mainwaring, the right-wing tabloid hit out at the left for “howling for resignations” over Fixed Penalty Notices handed out last night.

The paper reports that Mr Johnson attended the birthday gathering for nine minutes and that his birthday cake “never left its Tupperware box”.

Its forgiving position seems out of step with the British public, three-fifths of whom think Boris and Rishi should resign.

Elsewhere, the Guardian said the PM’s position “remains in peril” as further lockdown-busting parties could still emerge in the weeks to come as the police continue their investigation.

The Daily Mirror also takes a less than sympathetic approach to the scandal, declaring “Led by liars & lawbreakers” on its front page. The paper goes on to say that the Tory leader “refused to resign even though millions of Brits had stuck to the rules” during Covid.

It adds that the Met Police “shattered the fragile peace the PM had struck with his own backbenchers when it announced 30 more fines had been issued” on Tuesday, taking the total to 50.

The Independent notes that while a number of senior Tories rushed to the PM’s defence on Tuesday evening, this didn’t happen until Mr Johnson issued his televised statement of apology from his countryside retreat.

Then a “rash of Cabinet ministers” released “apparently co-ordinated tweets insisting that he should be allowed to get on with his job”.

Other papers focus on Mr Johnson’s apology itself.

The full round-up can be found below: