How it started/ how it's going. 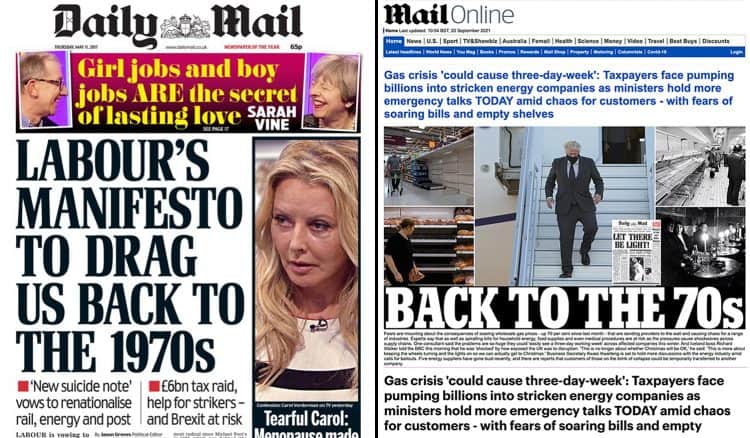 The Daily Mail has been reminded of a 2017 front cover warning people off the Labour Party after they produced the same headline relating to life under the Conservatives.

Ahead of the 2017 general election, when Jeremy Corbyn produced one of the biggest election shocks in recent history, the right-wing paper told voters that voting red would drag the country “back to the 1970s”.

Hitting out at the party’s renationalisation plans they claimed the Islington North MP would drag the country back half a century.

But they were made to eat their words after an identical headline was published today relating to life under Boris Johnson’s administration.

According to the paper, there are fears that energy prices could nearly double in the UK by April, with the gas crisis forcing a 1970s-style Three-Day Week to enable industry ‘to keep the lights on’.

Fears are mounting about the consequences of soaring wholesale gas prices – up 70 per cent since last month – that are sending providers to the wall and causing chaos for a range of industries.

Experts say that, as well as spiralling bills for household energy – which for some could nearly double by April – food supplies and even medical procedures are at risk as the pressures cause shockwaves across supply chains.

One consultant said the problems are so huge they could ‘easily see a three-day working week’ across affected companies this winter, evoking memories of the carnage in the 1970s.