The railways worker has been locked in a dispute with the local authority for two years. 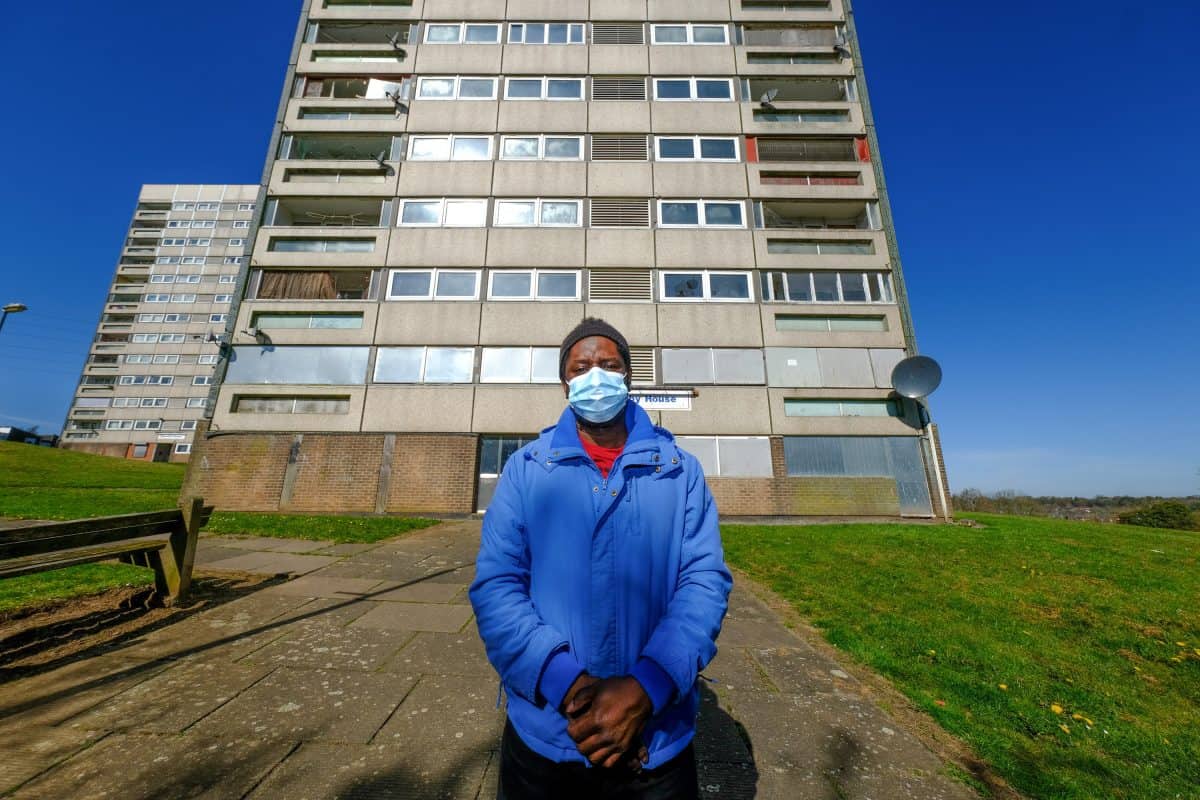 A dad-of-four has become the last remaining resident living in an entire tower block after he refused to move due to a council’s failure to find him suitable housing.

Ezekiel Hermon, 46, has been completely alone for six months inside Saxelby House, in Druids Heath, Birmingham, after all the other residents were rehomed.

He says his life has been made a living hell after being left isolated by himself at the crumbling high-rise where he has lived for 25 years.

Around 100 residents have moved into new accommodation after the derelict tower was earmarked for demolition to make place for affordable housing.

But Ezekiel says he has failed to receive any suitable offers of alternative accommodation from Birmingham City Council.

As a result, he has been left feeling “mentally imprisoned” and unable to sleep in the spookily deserted building, which people break into at night.

He says his biggest fear is that someone could enter to “torch the building” and the thought of Grenfell Tower disaster keeps him up most nights.

The railways worker has been locked in a dispute with the local authority for two years and may even be hauled before a court over his reluctance to move.

Ezekiel says he has so far only been offered one-bedroom retirement flats in high rise tower blocks – but needs more space in order for his four children to stay.

He said: “I feel frustration, loneliness and that I’m mentally imprisoned here.

“It’s not like I want to stay, I’m desperate to leave but need the right place to go.

“I feel like I’m being picked on and am trying to think what I have done wrong. I feel trapped because all I’ve been offered by the council is not suitable.

“The cost of keeping me here must be huge. They have to pay to maintain the whole building just to keep me here and I don’t know why.”

“The cost of keeping me here must be huge”

Ezekiel’s two girls, aged seven and eight and two boys, aged 12 and 14, split the time between his home and his ex-partner’s five miles away.

He currently lives in a two-bedroom apartment on the 11th of 12 floors which all have now been sealed off and sleeps on the sofa when his kids come round.

Ezekiel, who is currently unemployed, added: “The housing officer said I can only have a one-bedroom apartment because I’m on my own.

“But I said ‘how can I have a one-bed when I have four children that stay with me half the time?’

“I applied for a two-bed not in a high-rise because I’ve lived in this one since 1996 and have had enough of it like the rest of the residents.

“The point of demolishing this one is that people don’t want to live in them anymore.

“I just wanted a low-rise two-bedroom flat or maisonette, it wasn’t much to ask, because I have got four children and wanted to keep access to them.

“They rejected my application for a two-bedroom flat and I was told I should think of investing in an inflatable mattress so the children could sleep on the floor.

“The thought of my children coming over and me putting them on the floor was one of the things that made me break down.

“It was devastating. By that time I hadn’t seen them for three months because of the lockdown and the bubble hadn’t come in yet. I was missing them so much.

“They have offered me two-bed flats in retirement homes, but I’m not retired, I’m 46 and have four children.”

“It is horrible living in here now”

Ezekiel has been living all alone at the “decayed and rotten” tower block since November last year.

He added: “It is horrible living in here now.

“You wouldn’t think anyone lives there with the way the flats look, they look decayed and rotten.

“Now they’ve blocked off the car park the flats look derelict, you wouldn’t think that when the doors open you see four young children coming out of here and walking up.

“It’s too hard because if I hear a noise downstairs you think someone has come in but you can’t go downstairs to look and leave the children.

“I’m up all night because when you hear a door shut, or you hear a noise, you know that no one’s living here so somebody must be coming in to have a look around.

“It’s a decaying place with mould outside my flat, the doors and floors are dirty, and it’s been falling apart for years.

“Thinking of Grenfell keeps me up at night”

“Thinking of Grenfell keeps me up at night.

“When they were fireworks I couldn’t stop thinking what would happen if one set alight the curtains in the flats below.

“The only fire exit is the stairs so if there was a fire below I couldn’t get out and there’d be no one to raise the alarm.

“My anxiety is getting worse and worse and I’m not sleeping properly.

“I try to think why for some reason I am being treated differently to the other residents who got what they wanted and moved out ages ago.

“I’ve never had any complaints and have never been in debt on my rent.

“The next step from the council could be a repossession order. But it’s not about repossession because I don’t want to be here anyway.”

Birmingham City Council said they have been trying to find a suitable home for Ezekiel since April 2019, when rehousing from his block began.

A spokesman for the authority said: “Mr Hermon in line with all the other tenants was offered alternative accommodation according to our Housing Allocation Scheme.

“Empty properties are advertised on a weekly cycle and tenants can bid for a suitable home when one becomes available.

“All the other tenants have accepted alternative accommodation.

“Mr Hermon had not placed any bids, despite receiving help and encouragement from the council.

“So in order to support him the council placed bids on his behalf.

“To date Mr Hermon has received four offers of alternative accommodation that consisted of one and two bedroom properties which have all sadly been refused.

“Mr Hermon’s case has been looked at by the Local Government and Social Care Ombudsman who supported the council in trying to find him alternative accommodation.

“As we have not been able to secure alternative accommodation we have reluctantly had to take his case to court.

“We sympathise with the impact this is having on Mr Hermon’s well-being and we will continue to support him and work with him to find alternative accommodation.”