'Why would she be invited? She's just a school kid isn't she?' said a Conservative commentator on GB News. 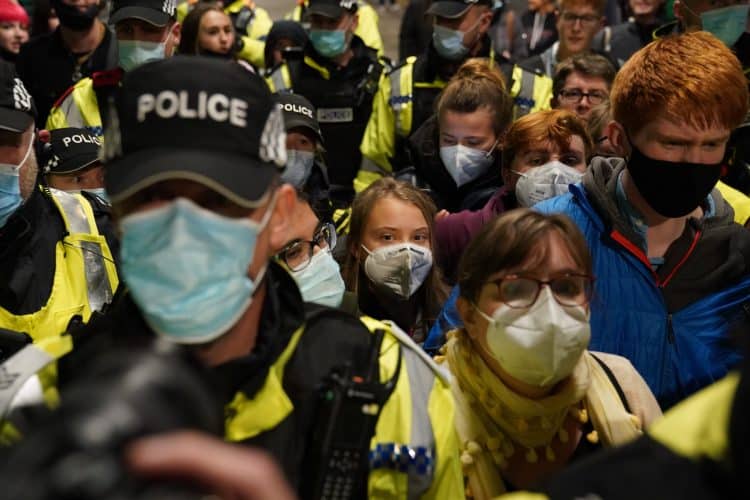 Climate activist Greta Thunberg is guidedn by police officers as she arrives at Glasgow Central train station ahead of the Cop26 summit which is taking place from Monday. Picture date: Saturday October 30, 2021.

Greta Thunberg has arrived in Glasgow ahead of the Cop26 summit, as world leaders prepare to discuss the climate crisis.

Her arrival has triggered the same angry reactions she seems to attract whenever she tries do something to help save the planet.

More of that later though.

The Swedish activist arrived at Glasgow Central station on Saturday evening, having taken a train from London Euston.

After leaving the train, she was surrounded by police and other activists as she made her way around the station.

The international conference begins formally on Sunday, with a summit of 120 dignitaries and heads of state starting the following day.

Ms Thunberg travelled to Scotland after she took part in a demonstration outside a bank in London on Friday.

She was mobbed by other climate change activists at the protest outside the Standard Chartered headquarters, as they lobbied against the global financial system supporting the use of fossil fuels.

Ms Thunberg is expected to take part in other demonstrations during the two-week summit in Glasgow.

There will be a march through the city on November 5, organised by Fridays for Future Scotland – the Scottish branch of the movement inspired by her activism.

She is also expected to speak at a rally taking place on Saturday hosted by the Cop26 Coalition.

However, Ms Thunberg has said her formal participation in the summit itself is uncertain.

In a preview for his BBC One show on Sunday, Andrew Marr asked Ms Thunberg if she had been invited to Cop26, and she responded: “I don’t know. It’s very unclear. Not officially.

“I think that many people might be scared that if they invite too many radical young people, then that might make them look bad.”

Of course there is a huge show of support for her and what she is trying to achieve, but as ever people seem to get a kick out of slamming a young woman trying to save the planet, go figure.