Extinction Rebellion co-founder Clare Farrell defended the Tube action and said: “The public, I don’t think, realise quite how serious this situation is.” 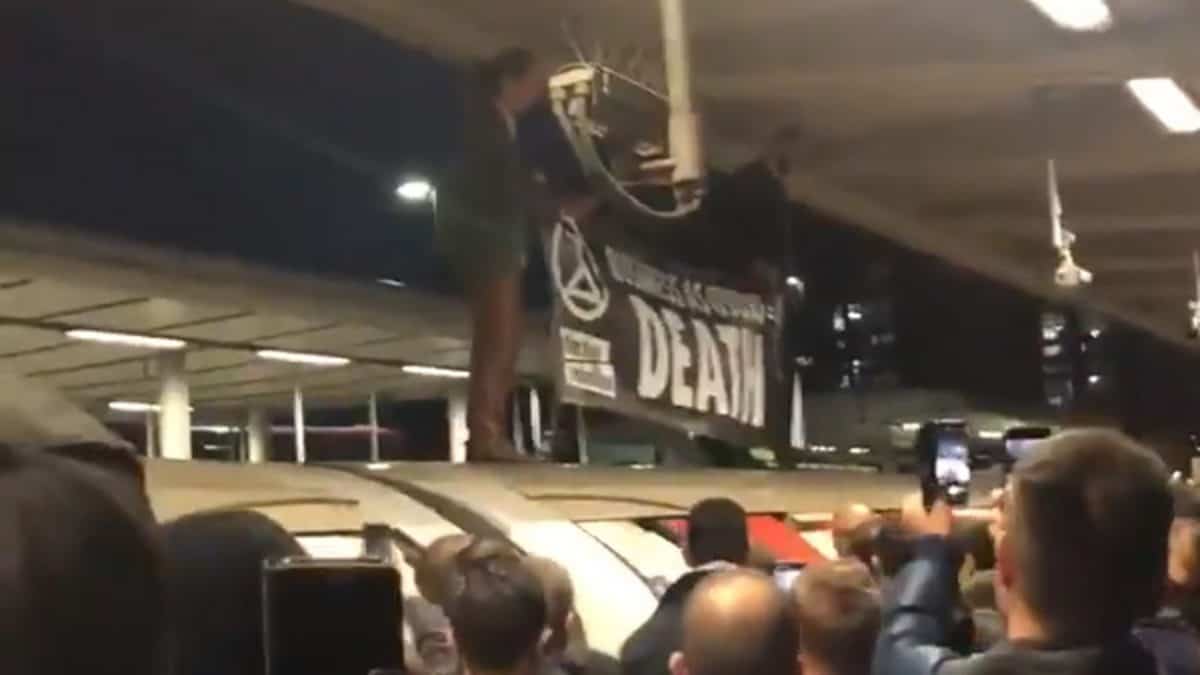 Commuters in London clashed with environment protesters this morning.

An activist was dragged to the ground after climbing on top of a Tube train at Canning Town station.

Holding a sign which read “Business as usual = death”, the Extinction Rebellion protesters were met with shouting from angry commuters on the platform.

I need to get to work, I have to feed my kids

According to one witness, one man yelled “I need to get to work, I have to feed my kids”.

In another clip, a man was seen dragging one of the activists down by his foot.

A member of Transport for London (TfL) staff appeared to intervene to stop people from attacking the protester further by holding them back.

Four people have been arrested after there were also protest incidents at Shadwell and Stratford stations, British Transport Police (BTP) said.

The action is the latest in a series from the anti-climate change group, who have been banned from protesting in London.

Any assembly of more than two people linked to the XR Autumn Uprising action is now illegal in the capital.

Since last week, protesters have targeted London City Airport, shut down areas around Parliament and the Bank of England, and blockaded Google’s HQ, with more than 1,600 people arrested.

The group’s legal bid to overturn the order is expected to reach the High Court on Thursday afternoon.

They argue that it is an “unprecedented and disproportionate curtailment” of the right to free speech and free assembly.

The public, I don’t think, realise quite how serious this situation is

“So what point is Extinction Rebellion making shutting down east London’s public transport system, preventing ordinary people from getting to work, school, hospital?”

Extinction Rebellion co-founder Clare Farrell defended the Tube action and said: “The public, I don’t think, realise quite how serious this situation is.”

Speaking to BBC Radio 4’s Today programme, she added: “It is still peaceful, and it is still non-violent.

“People did a similar action in April on the DLR train, those people were safe.

“It makes them vulnerable, and that’s what people are there to do when they put their body on the line.

“There is a vast vulnerability that people have in the face of climate and ecological emergency.”

He added: “This illegal action is extremely dangerous, counter-productive, and is causing unacceptable disruption to Londoners who use public transport to get to work.

“I urge demonstrators to protest peacefully and within the boundaries of the law.”

Related: We are all reluctant hypocrites when it comes to climate change