Though many of the main elements of Labour’s 2017 election manifesto and its ‘For The Many Not The Few’ pitch were leaked last week, the full manifesto is well worth a read as it offers a very different vision for Britain than the Conservatives have given us so far. Some policies here really designed to […] 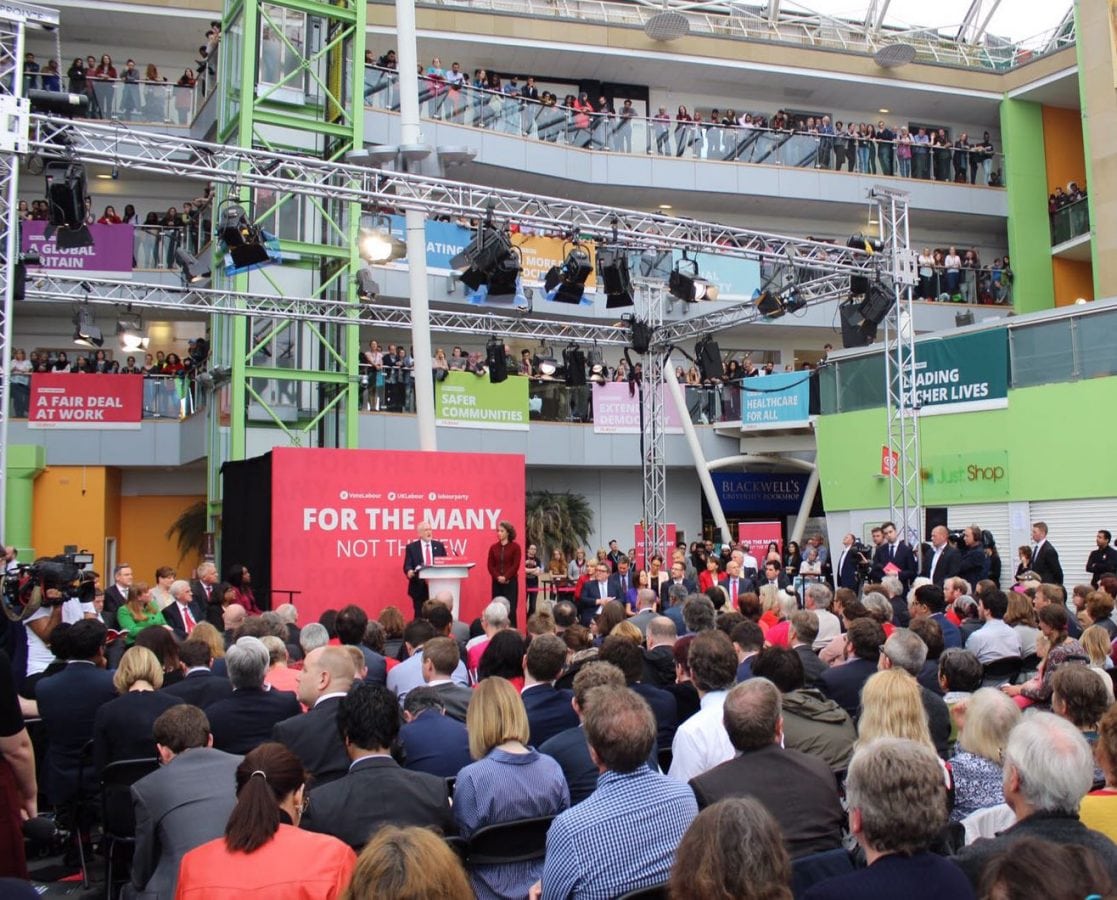 Though many of the main elements of Labour’s 2017 election manifesto and its ‘For The Many Not The Few’ pitch were leaked last week, the full manifesto is well worth a read as it offers a very different vision for Britain than the Conservatives have given us so far. Some policies here really designed to spread the wealth and happiness while reinvesting in the institutions that make Britain great.

Theresa May is expected to publish her manifesto on Thursday – as by all accounts despite her calling the snap election she always promised she wouldn’t, it has had a difficult birthing process. But thus far the main points to capture the public imagination are offering MP’s a free unwhipped vote on the desperately unpopular policy of bringing back fox hunting – a use of parliamentary time definitely not aimed at ‘The Many’, and certainly at a ‘Few’ more countryside votes. As well as showing the Tories have a social conscience and care about the working classes’ plight by making it desperately worse – destroying social care to such an extent that somehow it would now be up to us to try to negotiate a year off work to look after sick relatives. On no pay. Yet somehow this was sold in much of the press as progressive and compassionate Conservatism.

There was no mention from any of the Conservatives trying to rebrand the party as a working class party of the most important issues – the erosion of working rights and living standards that the Labour Party manifesto tackles head on.

Jeremy Corbyn launched the manifesto with an urgent promise to stop zero – hour contracts with a guaranteed minimum amount of hours and raise the minimum wage to £10 an hour by 2020 among other measures to arrest the growing poverty affecting millions of Brits, as well as protect working rights, access to union representation and justice.

There was a resounding cheer at Bradford University where Corbyn launched his election prospectus when he announced the abolition of the Conservatives’ policy of higher education fees that have burdened hundreds of thousands of graduates with massive debts, as well as reintroducing grants.

A reversal of the current Conservative funding measures set to cut funding from the vast majority of schools in the country is also promised. With a guarantee of class sizes of less than 30 for 5,6 and 7-year-olds that should come as a great relief to parents and teaching staff. There is also a promise for more local authority control to prevent some of the recent scandals of free schools and academies going off the rails and free childcare of up to 30 hours for 2-year-olds.

The manifesto promises to tackle the demoralising public sector pay gap that sees nurses resorting to food banks and many leaving public service. Cuts to fire service and policing will be reversed with 10,000 new police officers and 3,000 new firefighters promised.

The popular policies include bringing utilities, the Royal Mail and the railways back into public ownership. Better rail links are promised for the South West, Wales, North of England and Scotland.

Probably a lot more popular in the countryside than fox hunting is a pledge to ban fracking, a direct challenge to the Tories who have made it much harder for communities and councils to object to the practice only made economic by massive tax subsidies, and allowed fracking in national parks.

The Labour leader talked of investing in Britain rather than continued privatising, sell-offs, austerity and “managed decline,” reminding the gathered press that the Tories had increased national debt more than all Labour governments combined.
He flagged up economic measures  to pick up the regeneration of regions abandoned by the Tory Lib Dem coalition in 2010. A National Transformation Fund that will invest £250bn over 10 years in upgrading the economy is promised. And Corbyn vowed to redress the imbalance between London and the regions when it comes to investment.

The manifesto vows to protect the pockets of all but the top 5% who will face tax rises to pay £6.4bn towards the ambitious programme. An income tax rate of 45p on earnings of over £80,000, 50p on earnings above £123,000 means that tax-wise this is indeed a manifesto for The Many, Not The Few.

There is a commitment to finally tackle tax avoidance in a meaningful way, extra corporation tax and a Robin Hood tax, closing down a stamp duty on trades “loop hole” for banks and hedge funds, and extending it to cover financial derivatives and other highly-traded assets that will pay for much of the reinvestment in Britain’s public assets. At the current rate of 0.5 per cent per transaction, the party said the move would raise £4.7 billion in 2016/17, rising to £5.6 billion in 2021/22 – the final year of the next parliament.

There is a promise to triple lock pension incomes and many other policies that have polled as very popular with the British public. The only sour notes at Jeremy Corbyn’s launch of the manifesto were a few sneery comments from the usual section of the media hostile to his leadership.

Even the largely Labour-supporting Daily Mirror Political Correspondent Jason Beattie while conceding that the manifesto policies had polled as very popular with their readers, asked the Labour leader why he is not as popular as his policies in the Mirror opinion poll.

So the usual ad-hominem attacks on Corbyn aside, there will be inevitable questions in the Tory-supporting media about how this rejection of austerity for investment in Britain’s institutions, working and middle class incomes, youth and pensioners and their care will be paid for.

The manifesto is full of details as to how the books will be balanced and Labour have thrown the gauntlet down to the Tories by promising to invite independent scrutiny of their manifesto to check their costing. So far Theresa May hasn’t shown any enthusiasm for the Conservative Party manifesto to be compared in any such detail.

Last but certainly not least, at the launch, Jeremy Corbyn didn’t mention the “B” word. But the manifesto outlines a clear commitment to a very different set of Brexit negotiations priorities from Theresa May’s ultra Hard Brexit. Unlike the Conservative plan which appears to be antagonising the EU countries who will be deciding the settlement they will offer the UK, while vowing to leave the customs union and single market as well as the EU, – the Labour plan puts trade and prosperity first, as well as protection for the environment and people’s rights – especially EU-born people already living here and British ex-pats in EU countries.

There is a strong emphasis on “retaining the benefits of the Single Market and the Customs Union – which are essential for maintaining industries, jobs and businesses in Britain.” This gives the EU a lot more to work with. It also acknowledges those who voted to leave the EU, while protecting all of us from the loss of industry and job security that losing tariff-free access to Britain’s main market as well as all the other countries round the world that have trade agreements with the single market entails.

– Perhaps this is the most realistic approach to the ‘Leave’ vote that Britain can hope for, one that can actually unite the communities and families divided by last year’s Brexit vote and the dangerous direction Theresa May’s Hard Brexit, Deal Or No Deal strategy is taking us. Though all clearly depends on the reaction of the other 28 EU member states and what they finally agree to, the Labour Manifesto in aiming to leave the EU, but without the Tories’ economically suicidal leap out of the unparalleled prosperity of the single market is perhaps a direction our bitterly divided nation can grudgingly coalesce around. Crucially, this is also an approach that doesn’t risk tearing up the United Kingdom itself. – Leaving the single market will drastically destabilise England’s relationship with Scotland and Northern Ireland whose fragile peace rests on an open border with Ireland.

Whatever your views on the personalities of both leaders and parties, have a read of the Labour Manifesto – and the investment it offers in the country and its institutions. As a design for Britain, it is  certainly far less costly for the next generation than being a trade pariah outside the single market and all the other countries we trade with through being part of the single market.

We are yet to see the Conservative party manifesto. But with a perilous Hard Brexit on Theresa May’s cards, as well as further NHS privatisation, a plan to shut 24 A&E units and 19 hospitals that the Tories are keeping quiet until after the election, and a plan to brutally cut funding from 99% of UK schools that has the party’s own MP’s threatening to rebel, only cheered up by a plan to bring back toffs chasing foxes to a horrifically brutal end, it is likely to mean a very different country to the Britain For The Many Not The Few that Labour are offering in theirs.

Have a read of both manifestos and please, and if you haven’t already, please, please register to vote – by 11.59pm on 22 May – it takes five minutes – and exercise your democratic right tin an election where it really will make a difference to the sort of country we will be living in for many years to come.