A charity associated with Churchill has been accused of trying to "airbrush" the wartime leader's achievements. 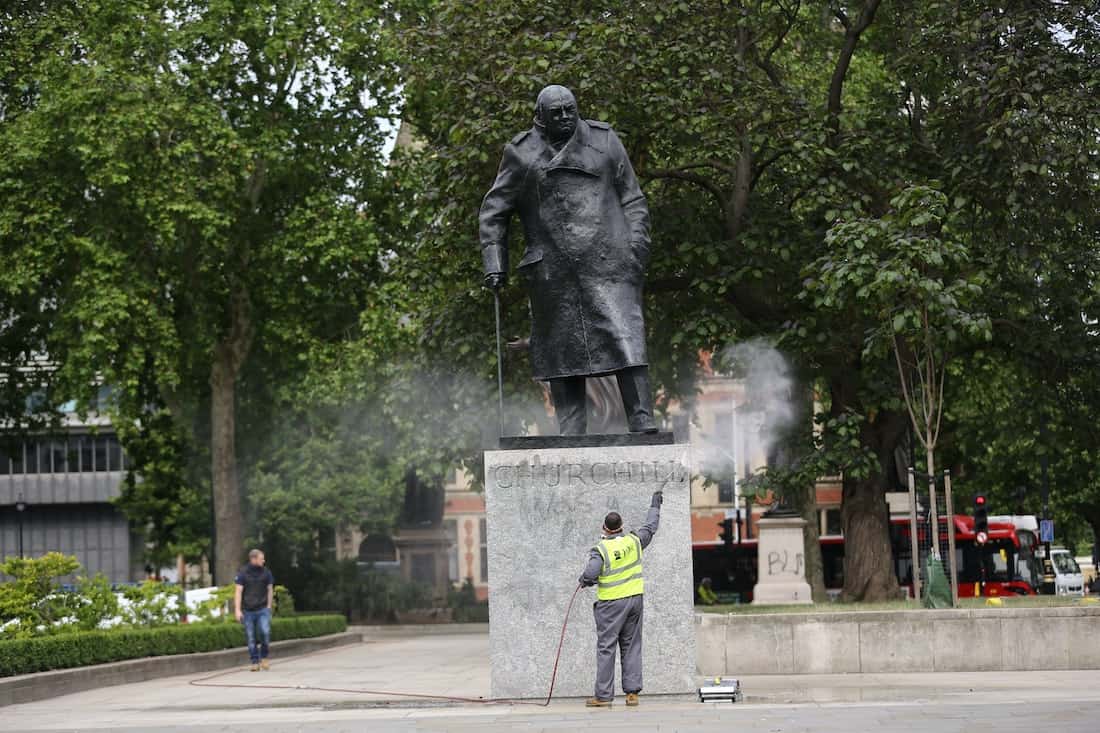 Oliver Dowden has accused charities of pandering to a “noisy woke brigade” amid a row about the legacy of wartime leader Sir Winston Churchill.

The culture secretary’s comments were fuelled by the Winston Churchill Memorial Trust’s announcement this week that it was renaming itself The Churchill Fellowship while removing images of the former prime minister from its website – a move that has come in for criticism from Boris Johnson.

In a statement, the charity – which awards grants for Britons to pursue social and community causes – denied it was seeking to disown the achievements of Britain’s Second World War leader.

However, it said many of his views on race were “widely seen as unacceptable today, a view that we share”.

The stance comes after a statue to the former prime minister in Parliament Square was targeted by Black Lives Matter protesters last year and daubed with the word “racist”.

But Dowden defended Sir Winston’s legacy, arguing the freedom people have today to express their views was won thanks to Britain’s defeat of the Nazis during the Second World War under the former Conservative MP’s leadership.

Asked about the charity’s actions, Dowden told LBC: “I found it quite extraordinary.

“I read their explanation and they say there are various reasons for this but the bottom line is, you look at the website before and after, and there is a lot less Churchill on it after than there was before.

“I do really worry, and you see this in relation to many charities, that they pander to a noisy woke brigade who are trying to challenge all aspects of our history.

“I do really worry when we start to question the sort of values that have made this such a wonderful country.”

Dowden’s comments come after the prime minister – who has written a biography of Churchill – accused the charity of attempting to “airbrush” away the “giant achievements” of Sir Winston’s time in Downing Street.

While he has been celebrated for his war efforts, he has also been accused of racism over his support for the British Empire and his attitude towards people from India and other races.

The idea for the charity was developed during the final years of his life with his approval. On his death, a nationwide appeal led to an outpouring of donations from the public.

In the years that followed it enabled the charity to award more than 5,800 fellowships to people to study practical subjects and then share what they had learned with their community or profession in the UK.

However, last month it was announced its name was being “simplified” because the original title was “confusing” to people and “did not explain what we do”.

The move saw the removal of a lengthy tribute and biography of Sir Winston from the website as well as pictures of the former premier.

The decision followed a statement the charity issued last year on racism which noted that “aspects” of Sir Winston’s life were the subject of present-day controversy.

In a further statement this week, the charity said the decision to change its name – originally taken in 2019 – was not an attempt at “disowning” Sir Winston.

“The key element we kept was the name ‘Churchill’. You cannot look at our new logo and avoid the importance we attach to that name,” it said.

“Today there is international admiration for Sir Winston’s wartime leadership in saving Britain and the world from Nazism. There is also controversy about his views on race.

“None of this takes away from Sir Winston’s enormous contribution to the world as we know it today.”

Related: Dairy farmers are binning milk because there are no lorry drivers