By Callum Towler  Sometimes I watch PMQ’s as if it’s a dystopian pantomime, like if all the robots in Isaac Asimov’s I, Robot defeated the people, but upheld democracy once a week in parliament just for a laugh. Witnessing David Cameron duck, dive and quip his way through the weekly questions is to watch a […] 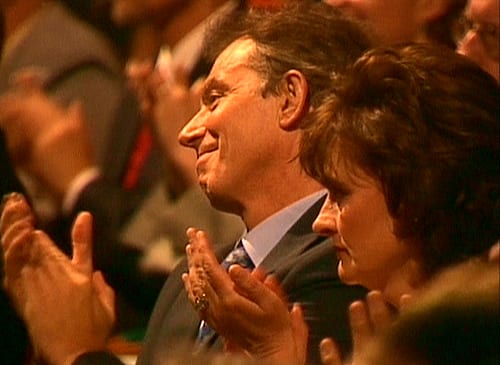 Sometimes I watch PMQ’s as if it’s a dystopian pantomime, like if all the robots in Isaac Asimov’s I, Robot defeated the people, but upheld democracy once a week in parliament just for a laugh. Witnessing David Cameron duck, dive and quip his way through the weekly questions is to watch a well-oiled machine programmed to dodge bullets. Rarely ever does he respond candidly. Instead, in the space where thoughtful answers should be, we’re treated to nothing more than evasion and brazen attacks.

Increasingly, it’s become clear that his replies to Corbyn fall into one of three categories: either he says something prosaic followed by “strong economy”; he brandishes him an imminent security threat to you and your family (run!); or, when he’s really on the ropes like this week, he has the audacity to throw Blair’s record in his face.

Now really? Expecting Corbyn to hold his hands up for the mistakes of New Labour is like counting on Edward Snowdon to accept blame for the illegality of NSA’s surveillance. Cameron voted with Blair more times than Corbyn ever did, yet he cowers behind Blair’s record to dilute his failings in power since.

We had a taste of this on Wednesday, during the heated exchange over the Google tax settlement. Cameron was backed into a corner, forced to defend the paltry £130 million deal for £6 billion’s worth of revenue (an effective tax rate of just 3 per cent) after his Chancellor called it a “major success” and Boris deemed it “derisory”.

Like a defeated boxer pulling his final punches before knockout, Cameron pinned it all on New Labour’s failure to collect, made a pointless jibe about Blair and Brown’s new financial advisor positions (a remark, I suspect, that’ll come back to haunt him when his time comes), and claimed it was “laughable” to think Corbyn and McDonnell would ever stand up to the banks. All before stamping compassionate conservatism further into the dirt by calling the Calais refugees “a bunch of migrants”.

Now, a fair amount of mud has been thrown at them, but in the back pocket of banks this Labour Party is not; well, not its leadership anyway. Their politics is counterposed to our suffocating reliance on the banking industry. In fact, McDonnell has made his platform as Shadow Chancellor about plugging tax loopholes and curbing aggressive avoidance.

People generally side with law reform that forces the likes of Vodafone and Starbucks to pay their fair share. Especially when oligopolies cleanse the streets of our family-owned coffee shops and independent book stores – penalised, just as the self-employed are, if they fail to stump up their payments in full.

A complacency has crept into the Conservative Party; for all we saw yesterday was a shirking of responsibility, there was no considered response to public outcry. And rhetoric aside, the party seems to lack a positive vision for the future of our economy. Every Statement, Osbourne buffs out his chest and claims he’s worked a miracle, but the numbers reveal a stunted recovery; not to mention the recent “cocktail of threats”, namely China’s downturn.

McDonnell has seen an opportunity, and to reestablish the party’s credentials, he’s enlisted economic titans from around the globe: who will run public lectures, opening up a new dialogue about economics, that’ll eventually be reflected in Labour policy. Names like Thomas Piketty, David Branchflower and Mariana Mazzucato send shivers down the spine of the right. They lend academic clout to ideas of state-sponsored innovation, equality-based markets and progressive taxation systems, that tend to contradict the reigning dogma: that the market knows best.

If the advisors put together a policy framework around the potential of our economy, and the politicians can convince the public it’ll markedly improve their lives, then Cameron and his party may be the only ones left reflecting on the past.