"There is literally nothing these people can’t balls up. Nothing." 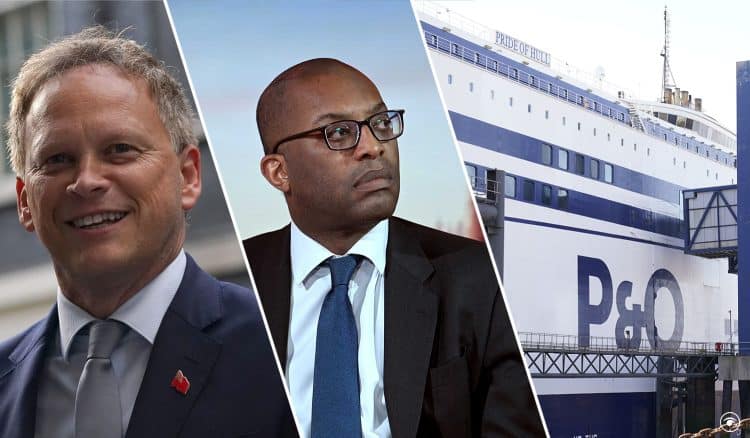 Business secretary Kwasi Kwarteng and transport secretary Grant Shapps both posted copies of their respective letters addressed to “the Chairman of P&O Ferries” Robert Woods, demanding answers over the company’s conduct after 800 employees were sacked without any notice.

But according to Sky News correspondent Joe Pike, Mr Woods is no longer in this role, having retired last December.

Just over an hour later, Mr Kwarteng posted a new edition of the letter addressed to “Peter Hebblethwaite, CEO of P&O Ferries”.

Mr Kwarteng’s letter states that the company “appears to have failed” to follow the process for large-scale lay-offs, including negotiations with employee representatives, and calls for P&O officials to answer 10 questions by the end of play on Tuesday.

Written jointly with business minister Paul Scully, it reads: “We are writing to you to express, in the strongest possible terms, the UK government’s anger and disappointment at the way that P&O Ferried handled the redundancy of so many of your staff this week.

“The way that staff, who have given years of dedicated service to P&O and played a critical role in keeping our country going during the pandemic, have been treated has been appalling.

“It therefore gives the government no pleasure to say that P&O has lost the trust of the public and has given business a bad name.”

Labour has today called on the Government to publish the legal advice it received on whether P&O broke the law when it sacked 800 workers.

The Opposition asked if there are legal moves ministers could take to reverse the decision to make so many staff redundant without consultation.

It also published analysis of data it said shows P&O Ferries has received £38.3 million in Government contracts since December 2018.

Protesters are set to march on the Tory Party conference on Saturday for another day of demonstrations against the move.

Demonstrators will gather at Comedy Carpet near Blackpool Tower on Saturday, with speakers including Prime Minister Boris Johnson and Home Secretary Priti Patel due to address the official forum.

Labour leader Sir Keir Starmer also called on the Government to suspend its contracts with the ferries giant, and its owners DP World, until the situation is resolved.