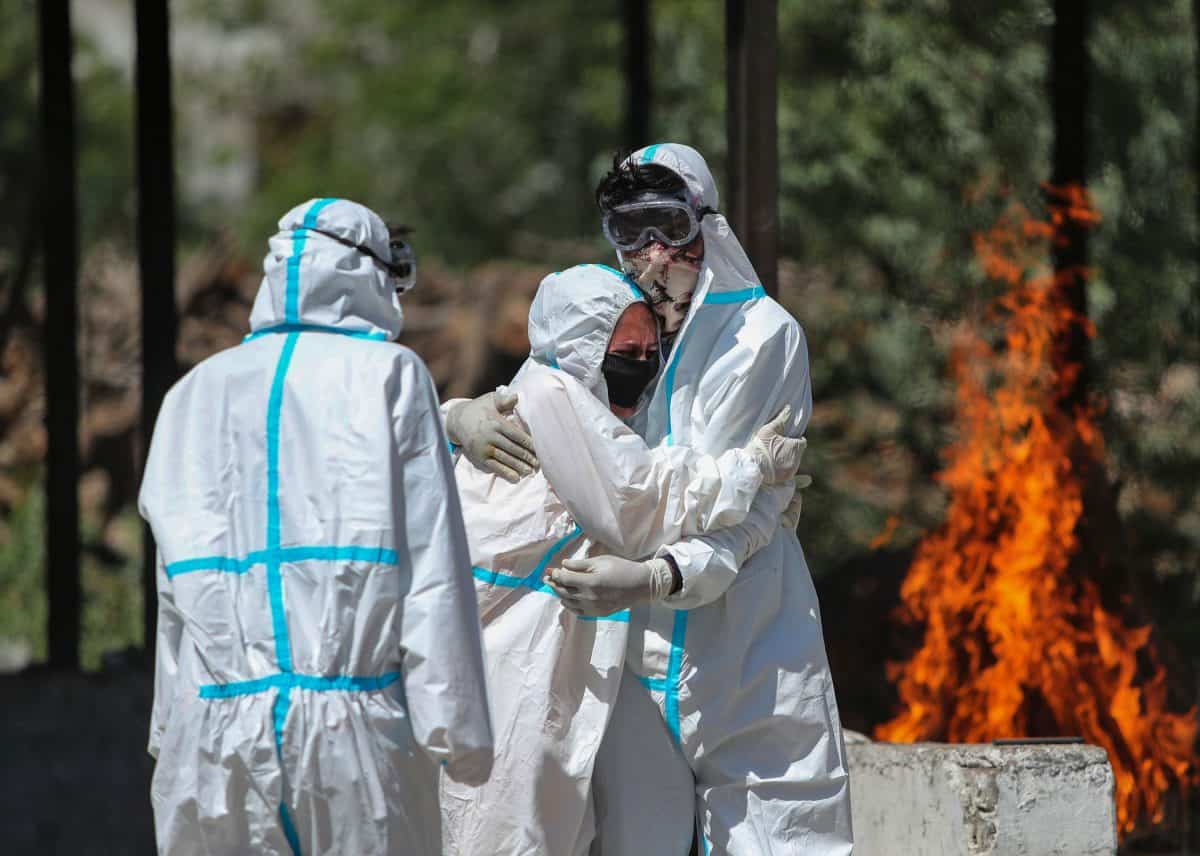 Britons want to share vaccines with coronavirus-stricken India – but not if it leads to delays in people in the UK getting their jab.

A new survey by Ipsos MORI reveals widespread support for sending vaccines to India, which is in the midst of a record-shattering second wave of the virus.

India has been vaccinating health workers, frontline workers and adults over the age of 45 but – despite being one of the world’s biggest producers of vaccines – it does not yet have the stocks to inoculate the roughly 600 million people who will be eligible from 1 May.

Starting Wednesday, all Indians 18 and older were allowed to register on a government app for vaccinations, but social media were flooded with complaints the app had crashed due to high use, and once it was working again, no appointments were available.

Less than ten per cent of the population has received an initial dose of a vaccine so far, and there are significant concerns about meeting demand.

Joe Biden has pledged “a whole series of help” to India – including treatments and drugs like remdesivir, and the raw materials needed to build vaccines.

The US president said on Tuesday that he had discussed with his counterpart Prime Minister Narendra Modi “when we’ll be able to send actual vaccines to India, which would be my intention to do”.

Two-thirds of Brits want the UK to send some of its vaccine stockpile to India – but only when everyone in the country has already been vaccinated. Support is weaker under different circumstances.

Just 43 per cent of Brits believe that vaccines should be sent to India as soon as possible, if it means that lockdown restrictions are eased more slowly than currently planned.

Only 36 per cent want jabs sent to India if it delays the vaccine rollout – and the same figure would support sharing vaccines if it means that family members or friends might have to wait longer to receive their jab.

But, in general, support for sharing vaccines has increased, Ipsos MORI found. Seven-in-ten Brits say the UK should pass on some extra doses of its vaccine stockpile to other countries once it has met the immediate needs of the UK population – up from 54 per cent in February.

Brits are much more likely to support sending medical equipment to India, with 75 per cent of those surveyed giving the thumbs up to the provision already shipped to India – and 70 per cent believing we should send more in the coming weeks.

India will receive urgent humanitarian assistance from 14 of the UK’s leading aid charities as it tackles an overwhelming coronavirus surge.

The Disasters Emergency Committee (DEC), which brings together a number of UK organisations, has extended its coronavirus appeal to include India.

“Several cities have imposed lockdowns and curfews, which will have a knock-on effect for people’s livelihoods, with the poorest and most marginalised communities hit hardest.

“DEC member charities have a long history of working with these communities and are supporting overwhelmed health services by providing medical supplies, treatment facilities and logistics assistance.

“With the generous support of the UK public, we can do even more to help the most vulnerable communities as they face a life-or-death situation.”

Organisations, including the Indian Red Cross, ActionAid, Oxfam India and Save the Children, will help support the country’s health system by providing PPE, disinfection kits, medical supplies and ambulances, and setting up isolation facilities.