Experts said Brits are making progress on cutting down meat consumption - but they'll need to double their efforts. 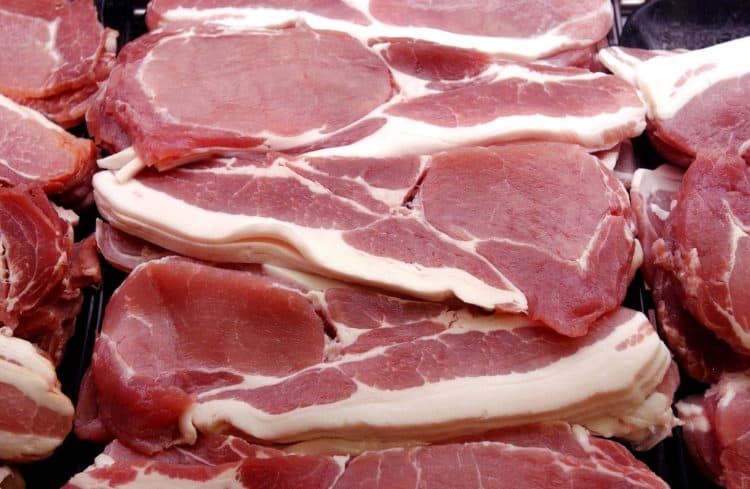 Embargoed to 0001 Wednesday April 17 File photo dated 5/1/2003 of rashers of bacon on display in a supermarket. Even moderate amounts of ham, bacon and and red meat are linked to bowel cancer, experts have warned.

Brits have cut their meat consumption by 17 per cent over the past decade – but need to do much more if they are to meet health and environmental targets.

Meat consumption is a huge cause of global heating and land degradation, and it also puts us at higher risk of cardiovascular disease, type 2 diabetes and some types of cancer.

The government-commissioned national food strategy for England recently recommended that people try to cut meat consumption by 30 per cent within the next decade.

And research has now shown that, while the country is making progress, there is a long way to go – with analysts stressing Brits double their efforts.

According to data collected through the National Diet and Nutrition Survey, which asks a nationally-representative sample of the UK population to keep a food diary for four days every year, average meat consumption between 2008-9 and 2018-19 decreased from 103g per person per day to 86g – the equivalent of two-and-a-half fewer pork sausages per week.

A decrease of 13.7g of red meat and 7g of processed meat were recorded, whilst white meat registered an increase of 3.2g.

Cristina Stewart, health behaviour researcher at Oxford University, told The Guardian that the reductions are positive, but too slow to meet dietary targets.

She said: “I think the reductions that we’re seeing are positive, but we’re moving pretty slowly, and if we continue reducing our intake at the same rate, we’re not really going to be reaching these dietary targets.

“We’re hoping that this analysis, which helps us better understand meat consumption trends and patterns, could help to tailor public health policies and behavioural interventions to try and accelerate that reduction and meet those targets.”

And Victoria Taylor, senior dietitian at the British Heart Foundation, told the newspaper that some people are still eating more than the recommended maximum of 70g a day of red and processed meat, putting them at risk of cardiovascular diseases.

Taylor said people should turn to plant-based protein instead, such as beans, lentils, nuts and seeds.

The news come after, earlier this week, it emerged that huge volumes of cheap EU pork are flooding the UK market because of a shortage of European butchers.

Phil Woodall, general manager at Thames Valley Cambac, a leading pig marketer, said the sector had been blighted by “a vast shortage of butchery staff as a result of Brexit, aggravated by the pandemic.”

Woodall said German producers are filling the gap left by a lack of British meat – with cheap pork they were unable to export to China because of a bout of African Swine fever.

“So Germany, one of the power houses of pork production in the EU, is flooding parts of the rest of Europe with cheap pork,” Woodall told The Independent.

The scheme is part of the supermarket’s plan to sell fully carbon neutral own-brand food and drink by 2025, in turn part of a climate plan to achieve net-zero carbon emissions by 2040.

The Co-op said it is investing more than £1.7 million to reduce the cost of 29 fresh, chilled and ambient vegan products from May 5 to help consumers who saw price as a barrier to choosing a plant-based diet.