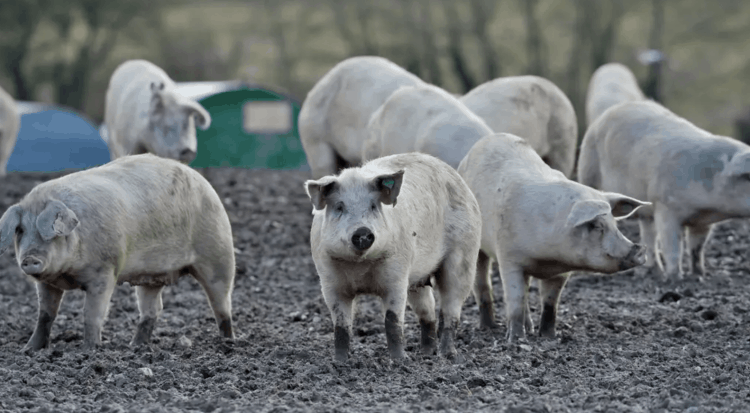 Huge volumes of EU pork are flooding the UK market and undercutting British farmers just as the industry is battered by an unprecedented labour crisis, a top supplier has warned.

A severe shortage of butchers has caused a significant backlog of pigs on farms – and now low prices for British produce has left some farmers facing bankruptcy.

Some pig producers risk losing as much as £17,000 every week unless drastic action is taken, industry experts warned.

The devastating news comes just as hundreds of pigs are slaughtered on British farms, because of a lack of workers to process them for sale.

‘We are being undercut’

Phil Woodall, general manager at Thames Valley Cambac, a leading pig marketer, said the sector had been blighted by “a vast shortage of butchery staff as a result of Brexit, aggravated by the pandemic.”

Woodall said German producers are filling the gap left by a lack of British meat – with cheap pork they were unable to export to China because of a bout of African Swine fever.

“So Germany, one of the power houses of pork production in the EU, is flooding parts of the rest of Europe with cheap pork,” Woodall told The Independent. “This is an aggravation to the crisis, which is adding to the UK’s staff issues.

“We are being undercut by European prices,” he said. “Some processors have been buying those pigs – which cost 160p a kilo to produce – at 75p and 80p a kilo.

“That means some producers are losing around £68 per pig, and an average producer may sell 200-300 pigs a week.”

Woodall explained British farmers now face losing an “unsustainable” £20,000 every week and ultimately going bust as there is now a higher dependency on imports. He hit out at the government, saying ministers are just “standing by and watching”.

It comes as some 120,000 pigs await a cull if labour shortages are not fixed. Some reports state hundreds of pigs are already being slaughtered as they simply do not have the space to remain on farms because of backlogs in processing them.

‘Simply don’t have the butchers’

Zoe Davies, chief executive of the National Pig Association, told The Times that the pigs being culled are not surplus, but pigs which are being refused by processing facilities because “they simply don’t have the butchers.”

Last week, it emerged that a Yorkshire farmer has been forced to cull hundreds of piglets because post-Brexit labour shortages in local abattoirs mean adult pigs aren’t being slaughtered fast enough.

The backlog is leaving less space on farms for younger pigs, which are cheaper and easier to kill.

The farmer has been “destroyed by it”, a friend told BBC News. “He had to kill perfectly healthy, viable piglets. It’s desperate. I’ve been producing for 26 years, and never faced the prospect of having to butcher pigs on my own farm before.”

According to the British Meat Processors Association (BMPA), around 80 per cent of staff in two big processing centres in Hull came from Eastern Europe before Brexit and the coronavirus pandemic.

But Nick Allen of the BMPA said the workforce is 15 per cent down on its usual size – and animals are mounting up on farms as a result, meaning farmers are “quietly starting to cull”.

“The main barrier is labour, with the change in the immigration policy. We are struggling to get butchers in particular, and it limits how fast you can run the plant,” he said.

“We were offering higher wages, but with the job market at the moment, it’s not worked. We do need access to some non-UK labour.”A Defra spokesperson told the BBC that the government is closely liaising with the industry to help ease existing “pressures”.