British scientists have discovered two enormous galaxies sitting right on the edge of space – forged in the early stages of the universe. Observations show the massive primordial galaxies at a time when the universe was just 780 million years old – only about five per cent of its current age. The galaxies are so […] 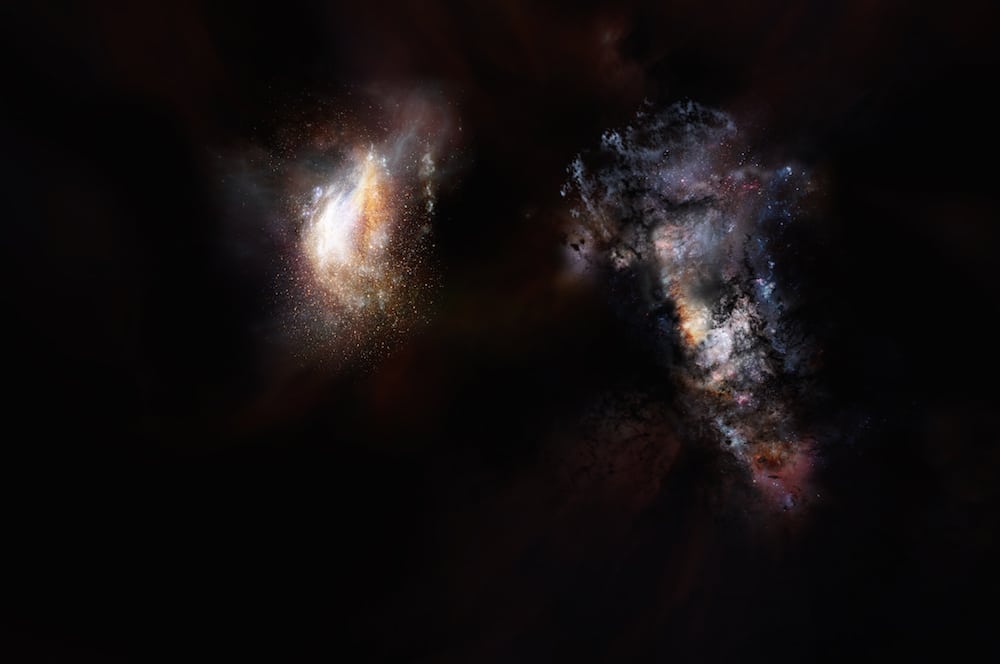 British scientists have discovered two enormous galaxies sitting right on the edge of space – forged in the early stages of the universe.

Observations show the massive primordial galaxies at a time when the universe was just 780 million years old – only about five per cent of its current age.

The galaxies are so close together they will soon merge to form the largest galaxy ever observed at that period in cosmic history, according to the international research team, which included scientists from University College London.

The observations, published in the Nature journal, also gives new details about the emergence of large galaxies in the early stages of the universe.

They push back the estimated epoch of massive-galaxy formation.

The discovery also reveals these uncommonly large galaxies are nestled inside an even larger cosmic structure, a halo of dark matter several trillion times bigger than the sun.

Study co-author Dr Thomas Greve, from UCL’s physics and astronomy department, said: “We expect the earliest galaxies that formed just a few hundred million years after the Big Bang to be ‘nuggets’ of stars and gas – perhaps with some similarities to dwarf galaxies we see in the nearby Universe.

“This system is anything but that, however.

“Our ALMA observations have revealed a massive system with extreme amounts of on-going star formation, gas, and dust at a time when the Universe was less than a billion years old, suggesting that these ‘nuggets’ of stars and gas were able to merge and form large galaxies very rapidly.

“In fact, the presence of such an extremely massive galaxy – and the massive dark matter halo that is must reside in – this early on in the Universe’s history is right at the limit of what is allowed by our best models of galaxy formation and evolution.”

The galaxies were observed during a period of cosmic history known as the Epoch of Reionisation, when most of intergalactic space was filled with an obscuring fog of cold hydrogen gas.

As more stars and galaxies formed, their energy eventually ionized the hydrogen between the galaxies, revealing the universe as we see it today.

Prof Marrone added: “We usually view that as the time of little galaxies working hard to chew away at the neutral intergalactic medium.

“Mounting observational evidence with ALMA, however, has helped to reshape that story and continues to push back the time at which truly massive galaxies first emerged in the universe.”

The galaxies studied, collectively known as SPT0311-58, were originally identified as a single source by the South Pole Telescope.

These first observations indicated that this object was very distant and glowing brightly in infrared light, meaning that it was extremely dusty and likely going through a burst of star formation.

Subsequent observations with ALMA revealed the distance and dual nature of the object, clearly resolving the pair of interacting galaxies.

This ‘de-lensing’ process provided intriguing details about the galaxies, showing that the larger of the two is forming stars at a rate of 2,900 solar masses per year.

The astronomers determined that this galaxy’s rapid star formation was likely triggered by a close encounter with its slightly smaller companion, which already hosts about 35 billion solar masses of stars and is increasing its rate of starburst at the breakneck pace of 540 solar masses per year.

The researchers note that galaxies of this era are messier than the ones we see in the nearby universe.

Their more jumbled shapes would be due to the vast stores of gas raining down on them and their ongoing interactions and mergers with their neighbours.

The new observations also allowed the researchers to infer the presence of a truly massive dark matter halo surrounding both galaxies.

Dark matter provides the pull of gravity that causes the universe to collapse into structures like galaxies, groups and clusters of galaxies.

By comparing their calculations with current cosmological predictions, the researchers found that this dark matter halo is one of the most massive that should exist at that time.

The team are now following up on more galaxies discovered with the South Pole Telescope with the aim of better understanding how quickly these galaxies came together and formed during reionization.