Britain’s newest super train came into service today (Mon) – setting off 25 minutes LATE and with the air conditioning leaking water. The Hitachi 800 was due to leave Bristol Temple Meads for London Paddington at 6am sharp but didn’t depart until 6.25am for unspecified ‘technical issues’. Passengers were still forced to stand, despite claims […] 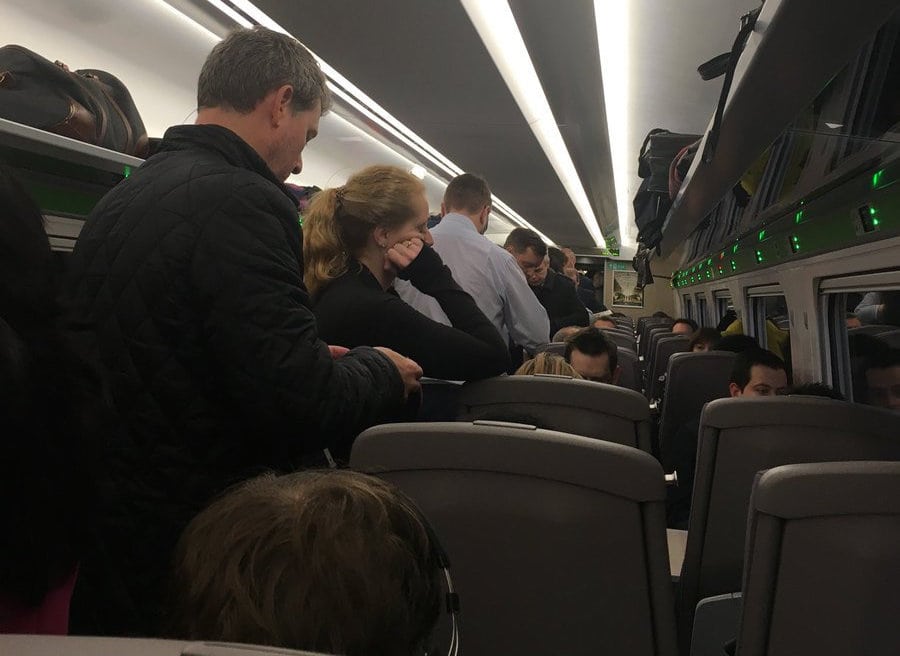 The Hitachi 800 was due to leave Bristol Temple Meads for London Paddington at 6am sharp but didn’t depart until 6.25am for unspecified ‘technical issues’.

Passengers were still forced to stand, despite claims that capacity on the new trains was increased by 20 per cent.

And one had their laptop damaged as water from the air conditioning poured into one of the carriages.

The air conditioning had to be turned off and passengers who paid £204 for a standard return to London were left uncomfortably warm in the unseasonably mild weather.

There was further embarrassment when the maiden journey ground to a halt at Taplow, Bucks because of an unexpected delay.

The first Hitachi Intercity Express trains are coming into service on the London-Bristol line with Great Western Railways.

They have a top speed of 148mph – but only after they reach Maidenhead in Berkshire where the line becomes electrified.

The delays in rolling out electrification also means that the engines will run on diesel fuel for part of their journeys.

Despite today’s glitches some commuters said the new trains had “a nice environment” and said they didn’t care what fuel they ran on as long as they were on time.

Transport Secretary Chris Grayling, who was on the first service, said: “These are the smartest trains in the country, probably the best we have ever had in the country.

“This going to be a fantastic service, really regular trains and far more capacity.”

The Government has ordered 122 of the Hitachi trains in a £5.7bn deal with the Japanese manufacturers who also make the world-famous bullet trains.

The first will run between London and the south-west and more are due to come into service from the capital to Scotland on the East Coast route next year.

They are due to run for 27 years compared to the 40-year lifespan of the trains they are replacing.

The new trains are designed to travel faster as they accelerate more rapidly and include a digital reservation system telling passengers whether a seat is booked.

Carriages also have more plug sockets and Wi-Fi throughout.

The GWR website says: “We’re currently seeing the biggest investment in the network since Brunel so we can offer more trains, more seats, and shorter, more frequent journeys and continue the network’s heritage of helping connect more businesses to new and prosperous markets.”

The fleet will be mostly produced in the UK at Hitachi’s plant in Newton Aycliffe, County Durham, which opened last year.