Facebook has removed the pages of the anti-Islamic group Britain First and its leaders. The social media company said the group had repeatedly violated its community standards. London’s mayor, Sadiq Khan has also issued a statement. He said: “Britain First is a vile and hate-fuelled group. “Their sick intentions to incite hatred within our society […] 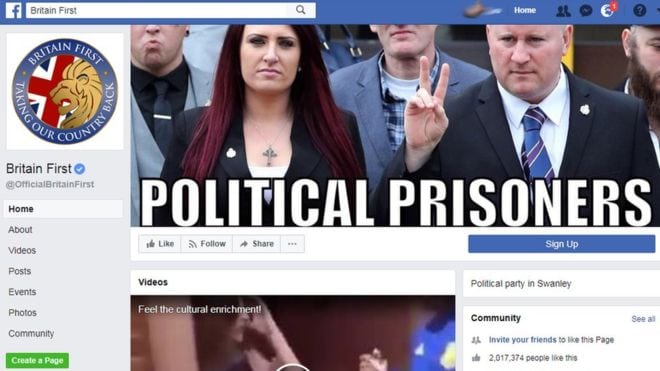 Facebook has removed the pages of the anti-Islamic group Britain First and its leaders.

The social media company said the group had repeatedly violated its community standards.

He said: “Britain First is a vile and hate-fuelled group.

“Their sick intentions to incite hatred within our society via social media are reprehensible, and Facebook’s decision to remove their content is welcome.”

“It was a long time in coming, and long overdue, but we are delighted that Facebook has finally faced up to its responsibility as a publishing platform and removed this hate preaching organisation.

“Britain First used Facebook as a means to leverage its position and push out some of the most divisive and vile anti-Muslim hatred you could find online.

“Ironically, if you wanted to watch an ISIS beheading you didn’t need to go to an Islamic State page, instead Britain First would show it for you.

“The group became very real ‘Facebook fascists’ and there are good reasons to believe it could now fold, particularly if Facebook stays strong and follows up on Britain First’s mirror and back-up pages.

“With Britain First leaders Paul Golding and Jayda Fransen already jailed, there are significant problems behind the scenes over access to the group’s social media, website and bank accounts. It could very well be the beginning of the end.”