A Brexiteer has thrown a very public strop after the results of an online poll didn’t go his way. Owen Halliday, who goes by the Twitter tag #standup4Brexit, posted a loaded question on his profile at the weekend asking if people would be “outraged” if Brexit was delayed any further. As things stand two-thirds of […] 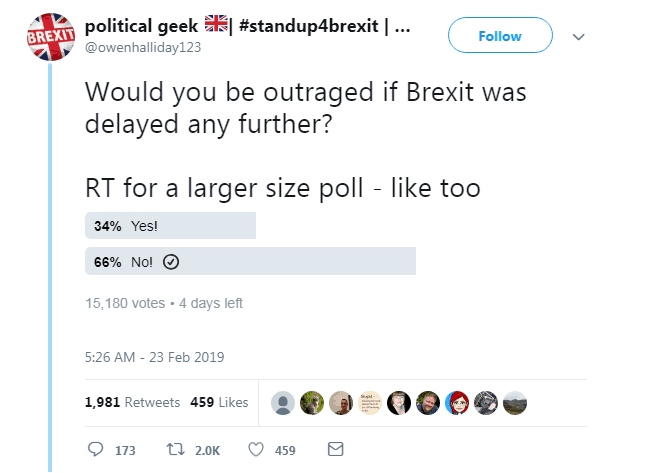 A Brexiteer has thrown a very public strop after the results of an online poll didn’t go his way.

Owen Halliday, who goes by the Twitter tag #standup4Brexit, posted a loaded question on his profile at the weekend asking if people would be “outraged” if Brexit was delayed any further.

As things stand two-thirds of respondents said they wouldn’t be outraged if that transpired, which has provoked an angry reaction from the host.

“Remainers are attempting to wreck this poll, I will not allow it to happen. PS – remainers stop following me!”

“This poll lasts for 7 days, LEAVERS and BREXITEERS get together and stop this remainer coup!”

“There is still over 5 days left of this poll – remainers have sabotaged it so far but you won’t win! – STOP FOLLOWING ME”

“I am investigating reports that remainers have colluded in bringing down this poll if true action will be taken. The poll will not be deleted because YES will win! REMAINERS are still continuing to follow me and I am getting extremely annoyed, STOP!”

“You will not win! Remainers have HIJACKED this poll. There has clearly been collusion between remain forces, ongoing investigation taking place and if true the poll would be invalid.”

Take the poll for yourself here:

Would you be outraged if Brexit was delayed any further?