He linked the increasing political volatility to an upsurge in paramilitary activity, including a bomb hoax at an event attended by Irish Foreign Affairs Minister Simon Coveney in north Belfast on Friday. 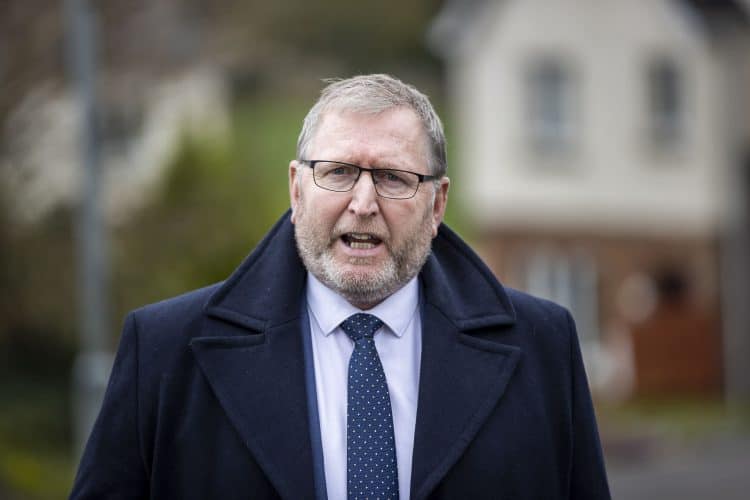 The constituency office of Ulster Unionist leader Doug Beattie was attacked hours after he announced that his party was withdrawing from participating in loyalist rallies against Brexit’s Northern Ireland Protocol.

A window was smashed at the property in Portadown, Co Armagh, in the overnight incident.

He linked the increasing political volatility to an upsurge in paramilitary activity, including a bomb hoax at an event attended by Irish Foreign Affairs Minister Simon Coveney in north Belfast on Friday.

That incident, in which a van driver was hijacked at gunpoint, has been blamed on the Ulster Volunteer Force (UVF).

“Let me be absolutely clear – those who thought it was a good idea to attack Doug Beattie’s office are completely wrong,” Sir Jeffrey told a business event in Belfast.

“I’m a democrat, I’ve always believed passionately in the rule of law and upholding democracy, and I believe that every single person who steps out and puts themselves forward as a public representative is entitled to be respected, regardless of their views.

“Violence can have no part to play in resolving our political issues in Northern Ireland. It never had, it never will, and I would say to whoever is responsible for this attack, and indeed whoever was responsible for what happened on Friday in terms of the event attended by the Irish Foreign Minister, Simon Coveney, that this contributes nothing to our opposition to the protocol, our desire to find solutions.

“It is only through politics we will find those solutions.

“So, I’m absolutely clear – these attacks are wrong, I condemn them, they have no place and no part to play in the future of Northern Ireland.”

Asked about the anti-protocol rallies, several of which he has attended and spoken at, Sir Jeffrey said there is nothing wrong with “peaceful protest”.

However, he stressed there is a need for people to use “careful” language.

“I think we should continue to encourage a culture of respect,” he said.

“We do have different opinions, but we should differ well. I think the language we use is important. I don’t think it’s wrong for people to engage in peaceful protest but certainly we need to be careful about what we say. And I always am.

“I want people to have a focus for their concerns, which is through the political process.