"And so it seems that the British Tory leadership are simply playing to their own grassroots and they have no regard for the damage that that is causing the economy..." 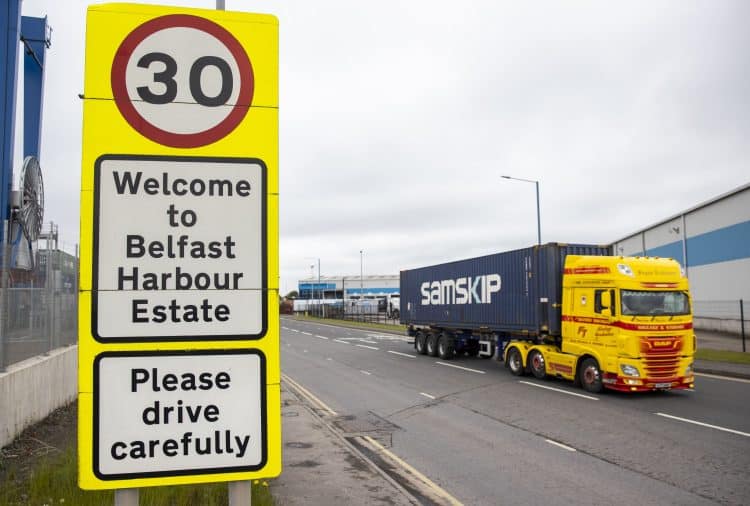 Any move by the UK Government to suspend the Northern Ireland Protocol would be reckless and inflict damage on the region’s economy, a Sinn Fein minister has warned.

It comes as leadership favourite Liz Trussis said to be considering a move to trigger Article 16 if she wins the Conservative leadership contest.

She is mulling whether to invoke the mechanism in a potential escalation of the post-Brexit row with Brussels.

The DUP, which is a vociferous critic of the protocol, has claimed the criteria for suspending it has been met and the Government should act.

The Government is already putting legislation through Parliament that would empower ministers to unilaterally scrap the checks on Irish Sea trade the protocol has created.

It is a move that the EU claims would breach international law.

Article 16 is an agreed mechanism within the protocol that allows either the UK or EU to suspend parts of the arrangements if they consider them to be causing economic, societal or environmental harm.

Triggering Article 16 would prompt a fresh round of negotiations between the EU and UK to resolve the issues.

The DUP has urged the Government to trigger Article 16 ahead of the passage of its domestic legislation.

Responding to the prospect of the Government moving to invoke Article 16, Mr Murphy said: “I think they have had a reckless approach to their dealings with the EU for some time now and the casualty in all that is unfortunately us here.

“That actually makes the ability to resolve any issues there are more difficult.

“And so it seems that the British Tory leadership are simply playing to their own grassroots and they have no regard for the damage that that is causing the economy here, or the uncertainty that’s creating for businesses and for households here.”

Many unionists are vehemently opposed to the protocol, claiming the Brexit checks on goods moving from Great Britain to Northern Ireland are undermining the region’s place within the UK.

The DUP, this week, reiterated its call for Article 16 to be triggered after it emerged that some types of GB steel being sold in Northern Ireland will be subject to a 25% tariff.

Quotas on steel exports are part of the UK and EU’s Trade and Co-operation Agreement.

Under the protocol, GB traders must effectively treat Northern Ireland as part of the EU single market for goods.

Recent changes to EU rules on certain types of steel mean a quota that allowed for tariff-free movement of the materials from GB to NI has been exhausted quicker than initially anticipated.

The rule changes only relate to certain categories of steel, with the movement of other types remaining tariff free.

“This issue should have been resolved before the protocol was even dealt with,” Mr Murphy said.

“The EU and the British government were supposed to resolve a number of issues, which might have dealt with tariffs and other matters between here and Britain and the only place to resolve any of these issues is dialogue.

“When the British government act unilaterally, and then start to crank it up by talking about invoking Article 16, then they damage the prospect of dialogue to resolve these issues and that is not in our interest.”

“What we’re facing right now is quite clearly what I believe would fall under within Article 16 and the economic difficulties that the protocol is causing,” he said.

“It would give the UK Government the authority to disapply that and to make sure that the quota wasn’t applied in that circumstance.

“But we’ve already met the criteria for the triggering of Article 16 a long time ago, there’s quite clearly been a diversion of trade.”

Related: Watch: Macron’s epic response to Liz Truss after she refused to call him a friend