“Consent was a cornerstone of agreements, for this, there is none.” 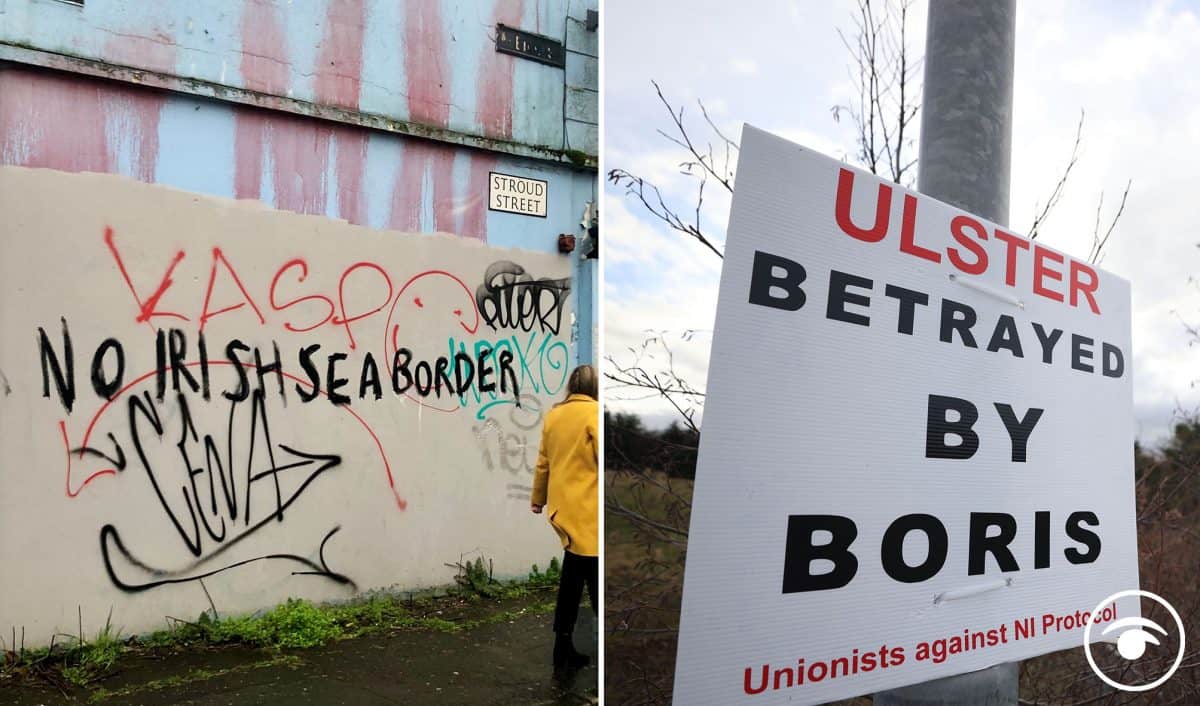 Efforts to address problems with the Northern Ireland Protocol should be a two-way street, the European Commission vice-president said.

Maros Sefcovic said the EU is “always ready to deliver” on its commitments surrounding the post-Brexit arrangements to avoid a hard border on the island of Ireland.

Mr Sefcovic told Euronews the EU is “always ready to deliver” on its commitments but the UK must realise the effort is a “two-way street”.

“I believe if the UK used all the flexibilities which we already agreed upon in December, then also the implementation of the protocol would be much easier.”

A series of loyalist signs have been posted near the sea port of Larne in Co Antrim criticising the protocol in trenchant terms.

On attempts to renegotiate the accord with the UK, Mr Sefcovic said: “I think we have to be all very cautious about breaching international law, an agreement we just signed.”

He added: “We can be 100% sure that the protocol is the solution, not the problem.

“The protocol is the only way we can avoid a hard border on the island of Ireland.

“I believe if the UK used all the flexibilities which we already agreed upon in December, then also the implementation of the protocol would be much easier.”

The European Commission vice-president says he has not discussed UK proposals that would restore the border on the island of Ireland.

Mr Sefcovic has said his discussions with Mr Gove had focused on the implementation of the protocol.

Mr Sefcovic apologised for the EU’s recent attempt to trigger Article 16 of the protocol to prevent the flow of vaccines into Northern Ireland.

The move has led to Unionist calls for Westminster to now invoke the clause which would create a border on the island of Ireland.

Mr Campbell said: “The Prime Minister speaks about wanting to keep the protocol to respect the Belfast Agreement but I suspect this is more out of convenience than conviction.

“In reality the protocol has already blown a huge hole in this provision by disrupting the east-west relationship bypassing the requirement for cross community consent prior to implementation.”

He added not a single voice from any shade of unionism in Northern Ireland supported the protocol.

“The Government must quickly realise that far from garnering support for these flawed arrangements, doing nothing further tilts the delicate balance of relationships within Northern Ireland.

“Consent was a cornerstone of agreements, for this, there is none.”

In a letter from the Equity union, the new rules are described as a “towering hurdle” for the industry.

“Before, we were able to travel to Europe visa-free. Now we have to pay hundreds of pounds, fill in form after form and spend weeks waiting for approval – just so we can do our jobs,” the letter states.

Those in the performing arts have already lost work, according to the letter.

More than 280,000 people have signed a petition calling for a cultural work permit deal to be reached between the Government and EU.

The statement, signed by more than 100 Equity members including Miriam Margolyes, Anne-Marie Duff and Celia Imrie, was first published in the Guardian newspaper.

It adds: “For a sector that is deeply embedded in the international community – from touring theatre and dance to film, television and commercials – which must work fast, flexibly and to demand, this is a disastrous blow and will hit those already struggling and marginalised groups the hardest.”

Government financial support has proven inadequate for many performing arts workers, according to the letter.

The letter adds: “Prime Minister, we urge you to negotiate new terms with the EU, allowing creative practitioners to travel to the EU visa-free for work, and for our European counterparts to be able to do the same in the UK.

“Not acting now will do further and irreparable harm to the UK’s creative workforce, our industries and to our standing on the international cultural stage.”

Alongside the list of signatories, members of the trade union for creative practitioners have been emailing their MPs​ to lobby on the issue.

Equity general secretary Paul W Fleming said: “Art and entertainment are a British success story. Worth more to our economy than banking, government intransigence threatens a cornerstone of our international soft power and a key export.

“More than that, the language of art and entertainment knows no boundaries; freedom of movement for our members as artists and working people is achievable, desirable and essential.”

This is not the first time prominent figures from the arts world have criticised the Government’s Brexit deal.

In January more than 100 musicians, from pop singers to classical composers, signed a letter saying performers had been “shamefully failed” by the post-Brexit travel rules.

The letter, backed by Ed Sheeran and Sting, said there is a “gaping hole where the promised free movement for musicians should be”.

In a statement to the Guardian, a UK Government spokesperson said: “We want our cultural and creative professionals to be able to work easily across Europe, in the same way EU creatives are able to work flexibly in the UK.

“Though the EU rejected proposals that would have allowed this, we hope member states will act on these calls by changing the rules they apply to UK creatives. We’re working urgently with our cultural sectors to resolve any new barriers they face, so that touring can resume as soon as it is safe to do so.”