Officers from as far afield as Gwent in Wales, Devon and Cornwall and Yorkshire have all been moved to the county to deal with the contingency plans brought in to deal with the change in rules when travelling to EU countries. 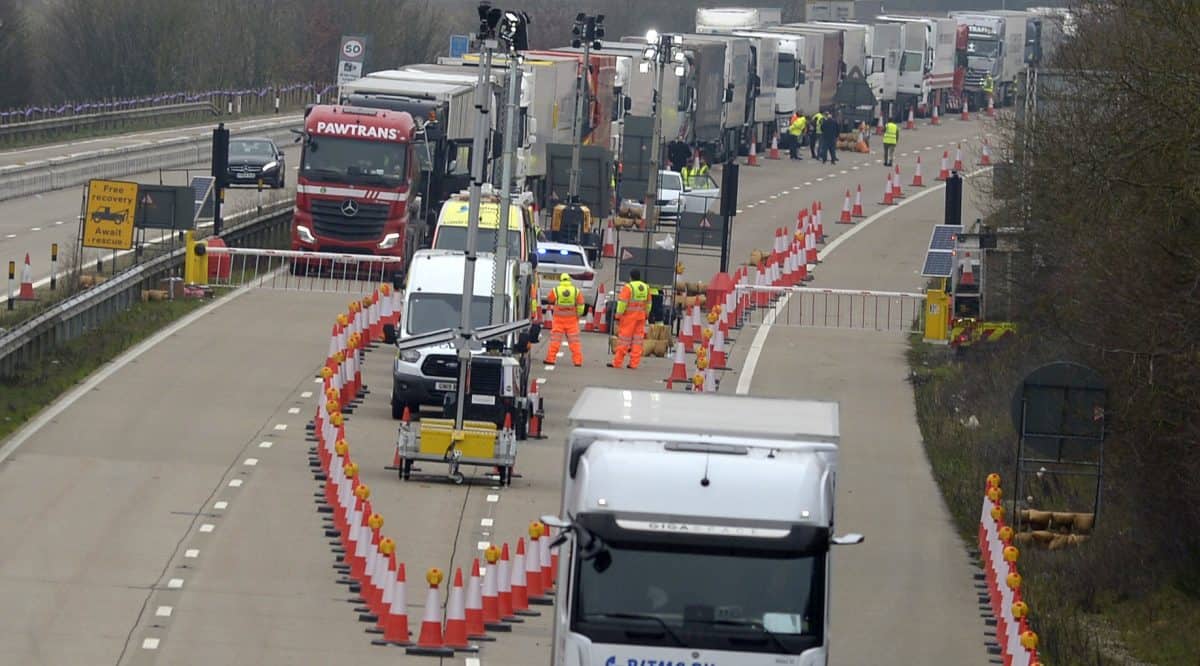 Operation Brock still in place on the M20 at junction 9. Credit SWNS

Police from more than 30 constabularies all over Britain have been redeployed to Kent to help the authorities manage Brexit traffic chaos, it has emerged.

Officers from as far afield as Gwent in Wales, Devon and Cornwall and Yorkshire have all been moved to the county to deal with the contingency plans brought in to deal with the change in rules when travelling to EU countries.

The cops are chiefly on the traffic management scheme in place to mitigate the disruption and delays around the Channel ports, along with help at lorry parks set up for HGVs waiting to cross to France.

Traffic levels in Kent have resumed to normal levels in the county, with more than 6,000 lorries a day now leaving via Kent ports.

There were more than 200,000 freight vehicles moving across both ports – Dover and Eurotunnel – last month, including both import and export traffic.

Kent Police said the assistance of other forces was not unusual for major events but said it could not disclose exact numbers because of operational reasons.

At the same time, it underlined that the costs of calling on other forces would be met by the government.

Metropolitan Police, City of London, British Transport Police and neighbouring Essex Police were all in the list of 33 forces.

She acknowledged there remained the potential for disruption particularly when the current restrictions of non-essential travel were lifted.

ACC Nix added: “Whilst it is pleasing that we have not yet experienced any significant issues on Kent’s roads, we are continuing to closely monitor daily traffic levels so any problems that may emerge can be quickly addressed.

“We are also aware that the roads are currently quieter than usual due to the national Covid-19 lockdown, and that disruption in the future remains a distinct possibility. We therefore cannot afford to be complacent.”

In an indication of the burden of dealing with the consequences of managing Operation Brock, the Kent Resilience Forum said some 6,000 traffic cones, 600 traffic management signs and more than 120 other items of road furniture including CCTV cameras and lights had been installed by Highways England.

A full list of all 33 forces who helped Kent Police: