Paramedics in the capital are currently receiving almost 8,000 call-outs daily. 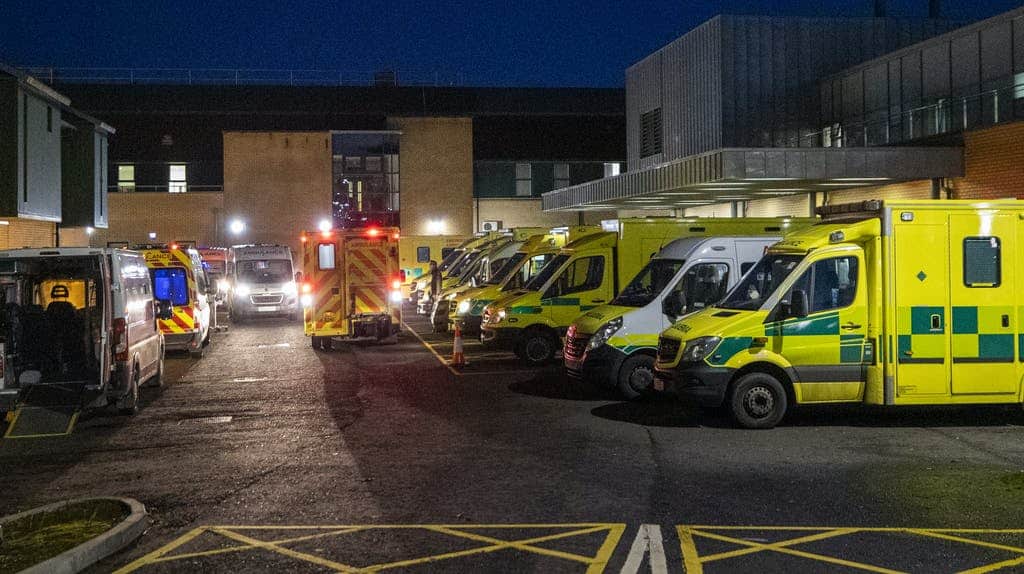 Hospitals in the south of England have seen a “real rise in pressure” as the number of coronavirus patients receiving treatment heads towards the April peak.

Paramedics in the capital are receiving almost 8,000 call-outs daily, and Boxing Day was described as one of London Ambulance Service’s “busiest ever days”.

The rise in patients come as hopes grow for the approval of the Oxford/AstraZeneca vaccine in the coming days, with volunteers ready to help roll out the jab nationwide, according to reports.

Saffron Cordery, deputy chief executive of NHS Providers, told the BBC: “We’re seeing a real rise in the pressure for hospital services, but also other types of NHS services as well… ambulance trusts in particular are coming under extreme pressure, as are community and mental health services”.

The 7,918 calls received by London Ambulance Service (LAS) on December 26 was up more than 2,500 on the 5,217 received on the same day last year, and medics are receiving support from other ambulance services in the South.

LAS said in a statement: “Like NHS organisations across the country, demand for our services has risen sharply over the past weeks and we are now taking up to 8,000 999 calls a day compared to 5,500 on a typical ‘busy’ day.

“Our colleagues in emergency departments are also under pressure receiving our patients as quickly as they can.

“We are working urgently with NHS partners to reduce any delays.”

According to the Government’s Covid dashboard, there were 21,286 people in hospital with coronavirus across the UK on December 22, which is the last day for which data is available.

This is slightly less than the 21,683 patients recorded on April 12.

Infection rates in England are currently highest in areas of Essex, London and other parts of the South East.

The area is in Tier 4 of Covid-19 restrictions along with most of the south of the country, with socialising banned and people told to stay home.

A review which will decide whether more areas will be moved into the harshest tier is expected on December 30, as the new highly infectious variant of coronavirus spreads across the UK and the world.

More than six million people in east and south-east England went into the highest level of restrictions on Saturday, which now affects 24 million people representing 43 per cent of the population.

Cases of the variant infection have been identified in more than a dozen countries with the latest reported in Norway, Madeira and Jordan.

Lockdown measures are also in place across the other three home nations, after mainland Scotland entered Level 4 restrictions from Saturday for three weeks, and a similar stay-at-home order is also in place in Wales.

Northern Ireland has also entered a new six-week lockdown, and the first week measures are the toughest yet, with a form of curfew in operation from 8pm, shops closed from that time and all indoor and outdoor gatherings prohibited until 6am.

Figures in Downing Street are due to meet with officials at the Department for Education on Monday to discuss whether schools should be kept open in the event that harder measures are needed, it is understood.

Amid reports that the Oxford/AstraZeneca vaccine could receive approval from regulators soon, people are being urged to not socialise over New Year in an attempt to “curb the spread” of the virus.

Ms Cordery, who leads the group which represents NHS trusts in England, said people “should be under no illusions that this is one of the most challenging times for the NHS”.

“It is vital that everyone heeds the new rules and restrictions in the run-up to the New Year and beyond.”

Around 10,000 volunteers have been recruited to help distribute the Oxford jab when it has been given the all-clear by regulators, the Telegraph reports with hopes of a mass rollout starting on January 4.

The Government said a further 316 people have died within 28 days of testing positive for Covid-19 as of Sunday, bringing the UK total to 70,752.

As of 9am on Sunday, there had been a further 30,501 lab-confirmed cases of coronavirus in the UK.

But the figures for deaths and cases are likely to be higher as Scotland is not releasing death data between December 24 and 28, and Northern Ireland is not providing either case or death data over the same period.