There are no reports of injuries following the blaze in Worcester Park. 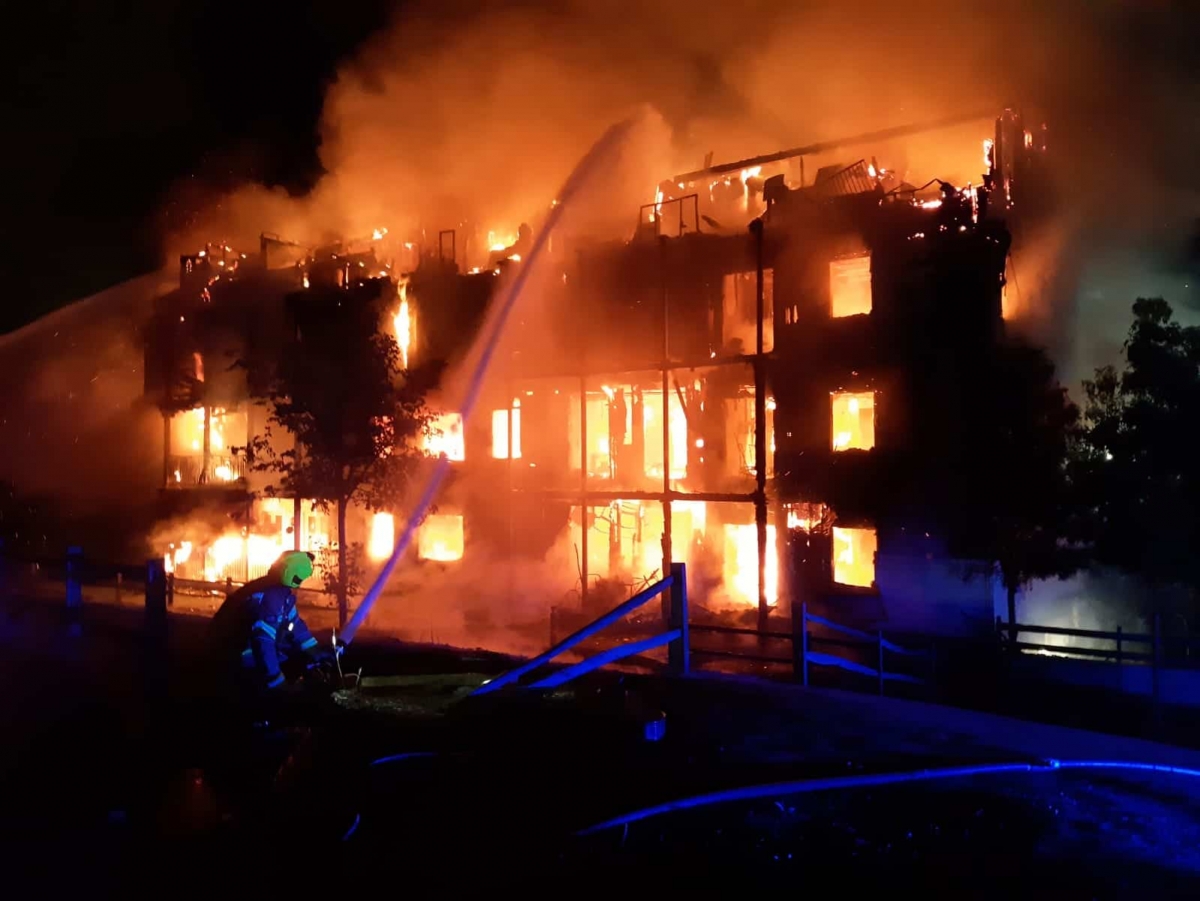 Handout photo taken from the Twitter feed of London Fire Brigade @LondonFire showing a four-storey block of flats engulfed in flames in Sherbrooke Way, Worcester Park, south-west London. A total of 20 fire engines and 125 firefighters were sent to the scene.

Over a hundred firefighters have been tackling a blaze in a residential block of flats in south-west London overnight.

A four-storey residential block has been destroyed after a fire ripped through the building in the early hours of Monday.

A charred shell is almost all that remains of the partially-collapsed development in Worcester Park, Sutton, south-west London, as firefighters continue to work at the scene.

The London Ambulance Service said no injuries had been reported.

Resident Stephen Nobrega, a father of three children aged between eight months and 13 years old, said he had “lost everything” after his ground-floor flat was destroyed.

“I heard a lot of residents outside and by that point somebody was already banging on my window and pressing my buzzer, so I knew it was quite serious.

“I got out of bed, got what you see me wearing on, got the kids with something on and managed to get us all out safely, which is the main thing.”

Mr Nobrega, who lived in a part-owned, part-rented two-bedroom flat on the ground floor, described how the fire quickly took hold and spread.

He said: “I could hear alarms going off but it was only when I was outside and could see the plume of smoke coming out…

“The top-right corner is where the fire started, in that area.

“Within about 20 minutes, fairly quick, it started ripping through, going from apartment to apartment, right to left, and then it started going down and caught alight on the other side.

“Speaking to one of the firefighters down there, he said my apartment seems to have survived, but the water damage is horrendous.

Mr Nobrega, who said he was in the process of selling the property, praised the emergency services for getting the blaze under control.

He said: “Fair play to them, I’ve never seen so many fire engines turn up.

“It’s taken them all night to bring it under control, but, to see it at its full rage, it’s a job and a half. I take my hat off to them.

“I’ve lost everything. The most important thing is everyone’s alive, there are no fatalities to my knowledge.

“But everything we had in there – from simple things like clothes to sentimental stuff which you’ll never get back – I’ve got photos of the kids on family holidays, sentimental bits and pieces gone forever … it’s heart-breaking.”

A total of 20 fire engines and some 125 firefighters were sent to the block, which contains around 20 flats.

By dawn, crews were still present pumping water into the blackened building, as a thick plume of acrid smoke drifted across the parkland towards Morden cemetery.

The fire service said 999 control officers had received dozens of calls about the fire.

The cause is not yet known.