“We believe Parliament can be unsuspended” 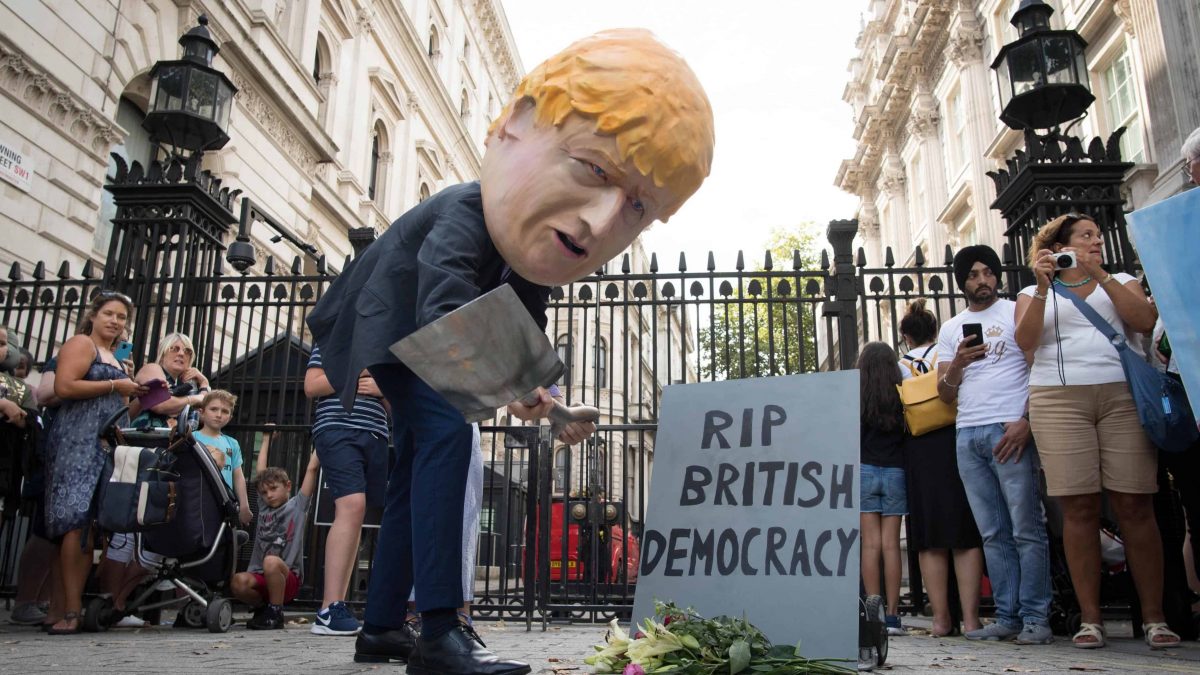 Thousands of people rallied to defend Parliament after the Queen granted Boris Johnson’s request to prorogue it on Wednesday, with further demonstrations in other towns and cities around the UK.

The move was criticised by constitutional experts and MPs across political parties. In his bid to become Tory leader had told moderate Conservatives just weeks ago that he was “instinctively averse to such arcane procedures.”

Labour MP Lloyd Russell-Moyle called it “the start of an anti-democratic coup worthy of a tinpot dictator.”  The leader of Her Majesty’s Opposition Jeremy Corbyn, and the Lib Dem leader, Jo Swinson, have appealed to the Queen. Jeremy Corbyn said there was “a danger that the royal prerogative is being set directly against the wishes of a majority of the House of Commons”.

In a major blow to Boris Johnson, Ruth Davidson is now set to resign as leader of the Scottish Conservatives. This could cost Johnson a majority at the next general election as under Davidson who campaigned to remain in the EU Conservatives had become Scotland’s second party.

An e-petition on Parliament’s website opposing suspending Parliament gained the 100,000 signatures needed for it to be debated by MPs in just a few hours, and reached a million before midnight.

“Parliament must not be prorogued or dissolved unless and until the Article 50 period has been sufficiently extended or the UK’s intention to withdraw from the EU has been cancelled” said the petition.

Impromptu demonstrations in support of Parliament were held across the UK: in London, Edinburgh, Cardiff, Manchester, Bristol, Cambridge and Durham.

Legal challenges against Mr Johnson’s decision have been launched, with separate bids launched in London and Edinburgh courts seeking an emergency injunction to prevent Parliament being suspended.

Speaking to BBC News, Ms Miller said the PM was “hijacking the Queen’s prerogative power” and using it for “unscrupulous means”.

She added: “I think that is what so shocking about this, is that its a very cowardly way of using these powers and constitutional convention.

“Our unwritten constitution is a bit like a gentleman’s agreement, and you have to say it’s not been used in that manner.”

In 2016, Ms Miller launched a successful legal bid, with judges ruling that MPs would have to vote before the Government could invoke Article 50 to formally start the UK’s exit process from the EU.

Gina Miller said she had received legal correspondence from the Government over the past two weeks stating that the issue of prorogation was of no more than “academic” interest. She said this now proved that Johnson has misled the nation.

She said in a statement issued on Wednesday night: “It is, sadly, all too clear from today’s announcements, that prorogation is a desperate reality, not a mere theoretical nicety. In view of this, I urge our courts to urgently hear my application for judicial review before 9 September 2019 – the earliest date that prorogation of parliament could come into effect.”

“We have all been comprehensively misled by the prime minister and his lawyers. A reply from the government legal department received late on 27 August stated: ‘The proposed intention to bring legal proceedings in respect of events which have not occurred and may never do so is noted. For the avoidance of doubt, we do not accept that the approach taken in your letter is an appropriate one.’

“To put this in an official legal letter and send it out at the same time as you are drafting a press release confirming parliament’s suspension the following morning illustrates just how manipulative and anti-democratic this prime minister and his government really are.”

A separate bid, lawyers acting for the Scottish National party’s Joanna Cherry and 74 other MPs and peers are set appear in court in Edinburgh on Friday morning to block the suspension of Parliament in Scotland’s court of session.

Jo Maugham, director of the Good Law Project, who has helped filed the motion said “We believe Parliament can be unsuspended” even though it had been approved by the Queen.

MPs will return to Parliament on Tuesday, but just over a week later on September 10, at the earliest, Parliament could be prorogued until October 14 ahead of a Queen’s Speech.

Speaking to Channel 4 News, Labour’s shadow chancellor John McDonnell said the Government is trying to “prevent us preventing a no-deal by shortening the parliamentary timetable”.

He accused Boris Johnson of attempting a coup.

He admitted the timetable for parliamentarians opposed to a no-deal Brexit is now “incredibly tight” but opposition MPs and rebel Tories will are drafting legislation to prevent the UK leaving without a deal.

Liberal Democrat leader Jo Swinson told the BBC’s Newsnight programme that anti-no-deal MPs could use “arcane and unusual” legislative routes to try to block the UK leaving the EU without a deal.

She added: “There are legislative avenues being explored between cross-party groups of members of Parliament with legal and constitutional experts looking at how this can be done, and different routes.

“We have got a Government that is prepared to take unprecedented routes and so we are looking at options as well that might be arcane or unusual that could be employed.”

Eddisbury Tory MP Antoinette Sandbach told BBC Newsnight: “I think it’s deeply worrying and to my mind very, very concerning that we are having such a long prorogation, that is what concerns me.

“My constituents want to have answers to their questions and this, the length of time, stops it. There is nothing to stop Boris Johnson from bringing forward domestic legislation in the normal way and it would have been possible to prorogue just for a short period, three days maybe.”

The Welsh Assembly will be recalled early to hold a day of debate on September 5 to discuss what First Minister Mark Drakeford called the “constitutional crisis which now faces Wales and the United Kingdom”.

The Scottish Parliament will sit on Monday at the end of its summer recess, with a debate on Brexit expected during the first sitting week.

Ms Davidson is expected to make a statement on Thursday where she will announce that she is quitting as leader of the Scottish Conservatives.

The former journalist, who took over the top job in the party almost eight years ago, will “make her position clear in due course”, a spokesman said.

But it is expected she will step down on Thursday, with her resignation coming in the aftermath of Mr Johnson announcing plans to temporarily suspend Parliament.

Even the Financial Times was forthright in its condemnation of Boris Johnson’s “affront to democracy” and in a scathing editorial called for a vote of no confidence against a sitting Prime Minister in an unprecedented move.

The damning editorial wrote: “Boris Johnson has detonated a bomb under the constitutional apparatus of the United Kingdom. The prime minister’s request to the Queen to suspend parliament for up to five weeks, ostensibly to prepare a new legislative programme, is without modern precedent. It is an intolerable attempt to silence parliament until it can no longer halt a disastrous crash-out by the UK from the EU on October 31. The seat of British democracy, long admired worldwide, is being denied a say on the most consequential decision facing the country in more than four decades. So, too, are the British people — in whose name Mr Johnson claims to be acting. It is time for parliamentarians to bring down his government in a no-confidence vote, paving the way for an election in which the people can express their will.

“… History has shown that charlatans, demagogues and would-be dictators have little time for representative government. They seek ways around parliament before concluding it is an inconvenience. Mr Johnson may not be a tyrant, but he has set a dangerous precedent. He and the cabal around him who have chosen this revolutionary path should be careful what they wish for…”