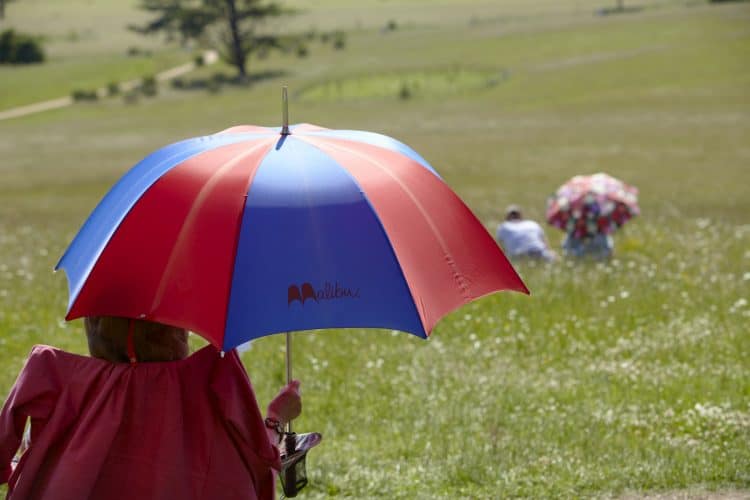 Tourism spots may also face more overcrowding at certain times of the year and temporary closures due to heat, flooding and storms if action is not taken to curb the climate emissions driving rising temperatures, the charity said.

There could even be a need for tourists to change their approach in hot conditions, such as avoiding going out in the hotter parts of the day like in southern Europe.

The National Trust analysed data from more than 85 million visits, before the pandemic, to 170 of its coastal and countryside sites, castles, stately homes, gardens and historic buildings across England, Wales and Northern Ireland.

It compared the visitor data with the weather conditions and discovered that a quintessential “National Trust day” across all its locations is one with temperatures of 21C, moderate winds and a very small amount of rain.

It also found people preferred visits to indoor properties at 20C, and above that the numbers of people choosing to go to stately homes and other historic buildings starts to decline.

While people flock to outdoor locations, particularly beaches and coasts, in warmer weather, around 24C, numbers decline above this dramatically reduce once temperatures hit 28C.

The National Trust said that climate change could mean more visits to sites at current “off peak” times as spring and autumn become warmer and summer becomes too hot.

With hot days expected to become more frequent due to global warming, the UK’s multi-billion tourism industry could be hit by fewer people wanting to head to inside tourist sites in the summer, the charity warned.

And the tourism high season could shift from the current peak of of July and August to autumn, the research suggests.

The National Trust also warned the £127 billion UK-based tourism industry may not be ready for extreme weather that rising temperatures are set to bring.

If greenhouse gas emissions are not dramatically reduced, an increasing number of stately homes and other indoor venues may have to temporarily close more often due to climate-driven excessive heat or storms.

Work may have to be taken to cater for a possible increase in visitors to the coasts in spring and early summer, while investment may be required to make indoor venues resilient to more high temperatures, rain and humidity.

The analysis comes after the National Trust produced a “hazard map” plotting potential climate change threats to its sites across the country, and after a pandemic summer has seen the impacts of more people holidaying at home.

The conservation organisation said it was already taking steps to deal with a changing climate, from planting plants at Sissinghurst Castle, Kent, that are resilient to warmer conditions to planting trees at Lyme Park in Cheshire to protect car parks and the house from flooding.

The charity said it was also planting trees away from buildings and busy areas to reduce the impact of storms blowing trees over, and looking at creating shade for outdoor seating areas and to help buildings cope with heat.

But it called for the government to take action to bring world leaders together at crucial Cop26 climate talks in Glasgow in November to limit global temperature rises and produce a credible, well-funded strategy to cut the UK’s emissions to zero overall, known as “net zero”.

National Trust head of climate and environment Lizzy Carlyle said: “What this data shows us is that we have a lot to do to prepare the UK tourist industry for the effects of climate change.

“Much of the debate around tourism and climate change to date has rightly focussed on international travel and the impact flights and foreign holidays is having.

“But what hasn’t been fully addressed is what the domestic tourism industry could be facing unless we take drastic action to reduce emissions.”

The industry could not tackle the challenges of climate change alone, she said, calling for government action to avert the worst impacts of global warming.

“What we can do, however, is start to adapt sites to cater for local pressures, for example more capacity for outdoor shaded seating, the ability to deal with surges of visitors at off peak times of year as the weather changes and how to protect staff and volunteers from things like extreme heat.

“In time, there could also be a need for a slight cultural shift in our approach as tourists, like avoiding hotter parts of the day like those currently experienced in southern European countries,” she added.

“The National Trust is already taking action across the places we care for to ensure sites are ready for these changes, but there is much to be done across the industry to collectively prepare us for more frequent days above 30C, higher winds and increased flooding,” she said.