Professor Andrew Pollard said that while it was right that regulators investigated reports of blood clots in people who have had the vaccine, data from millions of people was “very reassuring” that there was no link. 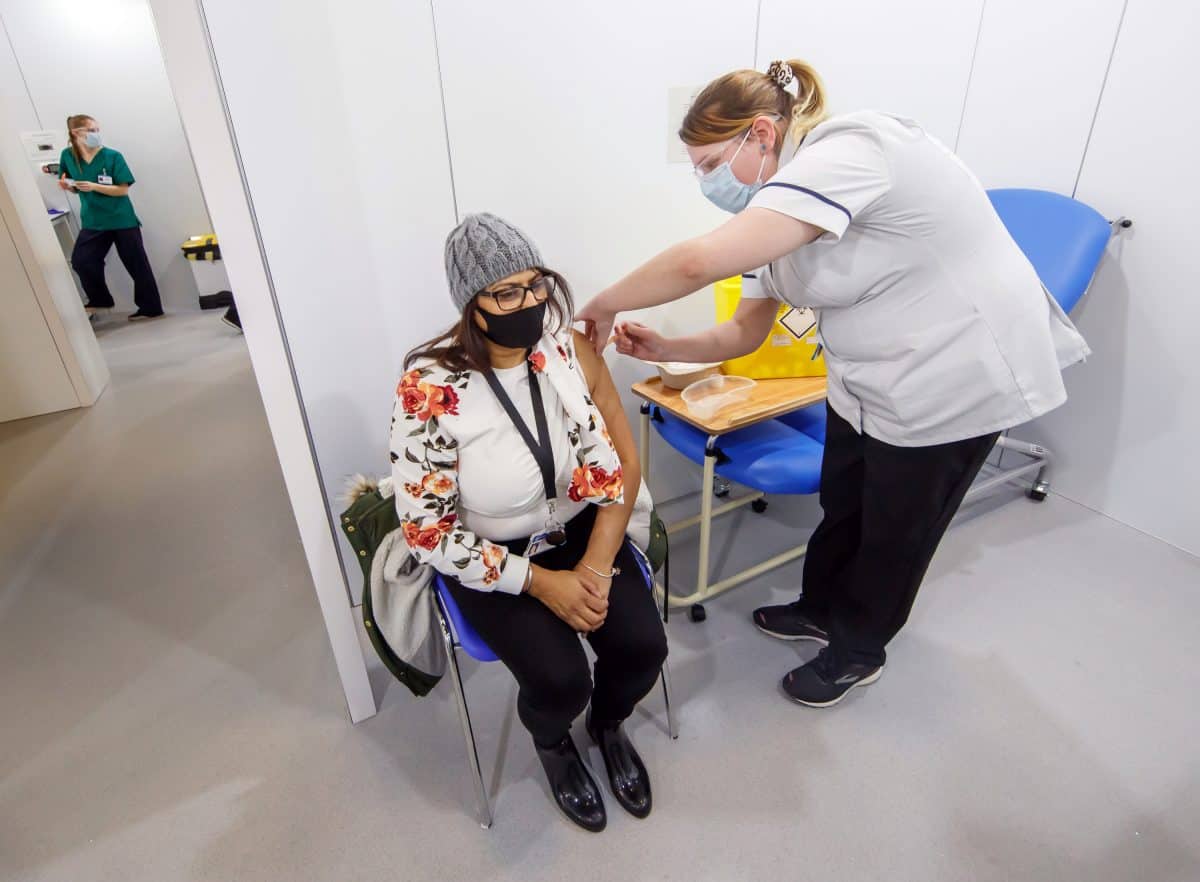 A woman receives an injection of the the Oxford/AstraZeneca coronavirus vaccine at Elland Road vaccine centre in Leeds, as a study shows that people from Asian and minority ethnic (BAME) groups living in deprived communities are more likely to be hesitant about the coronavirus vaccine than those in more affluent areas. Picture date: Friday March 12, 2021.

The head of the Oxford University vaccine group has sought to reassure the public over its Covid-19 jab after several countries temporarily suspended its use.

Professor Andrew Pollard said that while it was right that regulators investigated reports of blood clots in people who have had the vaccine, data from millions of people was “very reassuring” that there was no link.

It comes after the Netherlands became the latest country to suspend use of the Oxford/AstraZeneca vaccine over concerns about possible side-effects. The Dutch government said the precautionary move will last until at least 29 March, following a similar decision made by the Republic of Ireland.

Denmark, Norway, Bulgaria, Iceland and Thailand have all temporarily suspended their use of the AstraZeneca jab.

Last week, the World Health Organisation (WHO), the European Medicines Agency (EMA) and the UK’s Medicines and Healthcare products Regulatory Agency (MHRA) said there was no evidence of a link between the jab and an increased risk of blood clots.

Professor Pollard said “safety is clearly absolutely paramount” – but that about 3,000 cases of blood clots occur every month in the UK from other causes.

“So, when you then put a vaccination campaign on top of that, clearly those blood clots still happen and you’ve got to then try and separate out whether, when they occur, they are at all related to the vaccine or not,” he told BBC Radio 4’s Today programme.

He said that more than 11 million doses have now been given in the UK, and the MHRA has said “very clearly that they’re not seeing any increase in the number of cases of blood clots” over what they would see normally.

“I think at this moment we’ve got the most data from the UK, which looks very reassuring, but of course it’s absolutely right that there’s careful monitoring of safety and this gets looked into,” he said.

The professor pointed to the “huge risks” from Covid-19 for those who are unvaccinated, adding that “if we have no vaccination and we come out of lockdown in this country, we will expect tens of thousands of more deaths to occur during this year”.

He continued: “A number of countries around Europe are now seeing an increase in cases again. Italy and France and Germany and Poland – all have the start of a new surge in cases.

“It’s absolutely critical that we don’t have a problem of not vaccinating people and have the balance of a huge risk – a known risk of Covid – against what appears so far from the data that we’ve got from the regulators – no signal of a problem.”

Elsewhere, Professor Anthony Harnden, deputy chairman of the Joint Committee on Vaccination and Immunisation (JCVI), also sought to reassure the public and said people should attend their vaccine appointments.

He said that the EMA, the MHRA, the World Health Organisation and AstraZeneca have “all said this vaccine is safe”.

He told BBC Breakfast: “The data that we look at on a weekly basis on JCVI and a daily basis at MHRA are reassuring that there is no link, so we are right in this country to press on.

“We will keep monitoring this and if there is any safety signals that we are concerned about, we would let the public know straight away.

“At the moment, the message is absolutely clear – go and get your vaccine when offered. I spent all yesterday in our practice vaccinating with the Oxford/AstraZeneca vaccine – I would not be immunising my own patients unless I felt it was safe.”

Prof Harnden said analysis of the 11 million doses of the vaccine given so far in the UK had found “no demonstrable difference between the blood clots in those that have been vaccinated from those in the general population.

“We have to remember that there are 3,000 blood clots a month on average in the general population and because we’re immunising so many people, we are bound to see blood clots at the same time as the vaccination, and that’s not because they are due to the vaccination.

“That’s because they occur naturally in the population. One ought to also remember that Covid causes blood clots. So, the risks of not having the Covid vaccination far outweigh the risks from the vaccinations.”

Related: ‘Terrified’ women regard the streets as ‘lawless’ when it comes to male behaviour