The Daily Mail praises the “Rwanda plan” and labels those criticising the scheme “Left-wing lawyers and naysayers”. 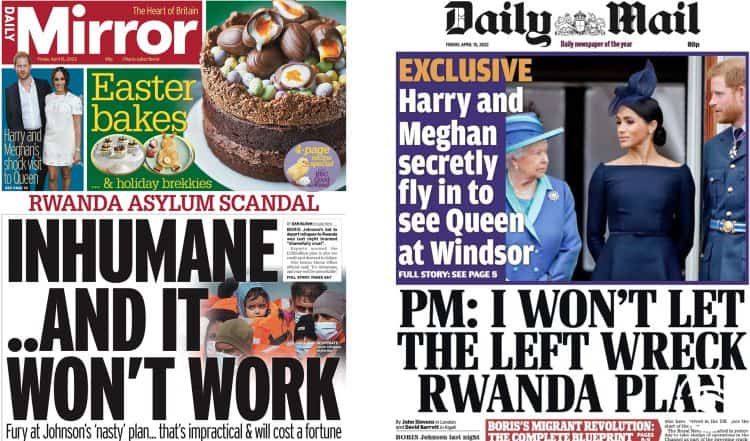 Boris Johnson has put the Navy in command of the English Channel, as he defended a multimillion-pound scheme to send some asylum seekers who make the crossing in small boats to Rwanda.

The Prime Minister conceded on Thursday that he expects plans to detain and fly migrants more than 4,000 miles on chartered planes to the East African country to be challenged in the courts.

But after widespread criticism from opposition MPs and refugee charities he denied the expected removal of thousands of people in the coming years at the expense of the taxpayer is “draconian and lacking in compassion”.

Mr Johnson deflected repeated questions about the fine he has received for breaching his own coronavirus laws as he set out his migration plans in a speech in Kent.

He said the Royal Navy would from Thursday take over “operational command” from Border Force in the Channel to ensure “no boat makes it to the UK undetected”.

So what did the papers make of it?

The Government’s plan to send asylum seekers to Rwanda dominates the papers for the second consecutive day.

The Guardian similarly leads with an assessment of the proposal as “inhumane”, citing Tory peer Sayeeda Warsi who called it “ineffective and costly” and said it shames Britain’s “proud history as advocates of human rights “.

The Independent reports that “just months” before the Prime Minister agreed to “deport thousands of asylum seekers” to Rwanda, Britain condemned the east African country for “failing to investigate human rights violations”.

The i says Home Secretary Priti Patel is bracing for a “legal battle” over the Government’s “cruel” Rwanda plan.

“No migrant boat will go undetected”, declares the Daily Express, quoting Mr Johnson’s speech on Thursday in which he announced the Navy has been tasked with tackling the “Channel migrant crisis”.

The Daily Mail praises the “Rwanda plan” and labels those criticising the scheme “Left-wing lawyers and naysayers”.

Elsewhere, The Daily Telegraph reports on the British man who has been caught by Russian forces while fighting in Ukraine. The paper says Aiden Aslin was “paraded on Russian television” after being “severely beaten”.

The Sun splashes with the Duke and Duchess of Sussex’s surprise visit to the Queen and speculates it signals the couple offering an “olive branch” to the royal family after “snubbing the Duke of Edinburgh’s memorial”.

And the Daily Star hits out at the Home Secretary for forgiving the PM and Chancellor over their lockdown law-breaking, noting that Ms Patel “previously demanded neighbours dob on one another for flouting Covid laws”.

Related: Watch: To justify ‘cruel & inhumane’ Rwanda policy the govt has ‘lied’ to the public