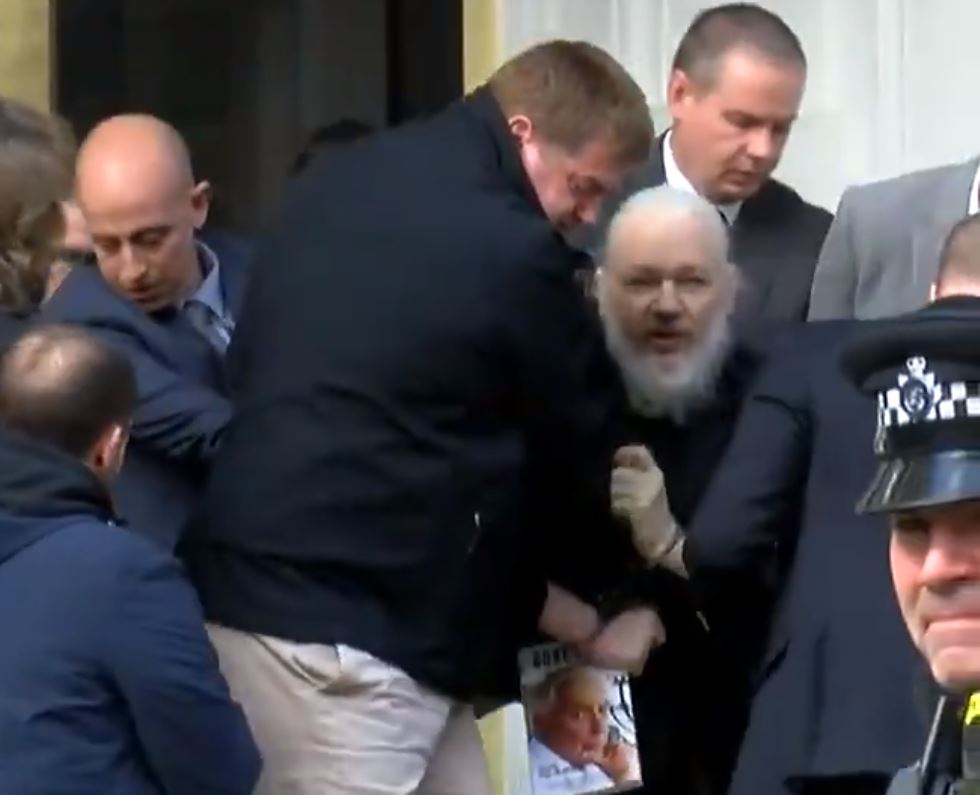 As the UK government confirmed an extradition request by the US – so long as there are assurances that Julian Assange won’t face the death penalty, the WIkileaks’ co-founder’s confidante Pamela Anderson branded Britain “America’s bitch.”

Shortly after the Ecuadorean Embassy in London allowed the Metropolitan Police to arrest the freedom of information campaigner, it was revealed that Assange is subject to an extradition request from the United States government over yet-unspecified “computer related offences.”

A Home Office spokesperson said: “We can confirm that Julian Assange was arrested in relation to a provisional extradition request from the United States of America.

“He is accused in the United States of America of computer related offences.”

This has been confirmed by the London Metropolitan Police, as well as the Home Office, outlining the extradition process he will face.

Many figures all over the world reacted in dismay, including actress Pamela Anderson who has visited Assange during his six years holed up inside the Ecuadorian Embassy in London, after Swedish rape allegations against him, which were later dropped.

Anderson tweeted: “I am in shock.. I couldn’t hear clearly what he said? He looks very bad. How could you Equador ? (Because he exposed you). How could you UK. ? Of course – you are America’s bitch and you need a diversion from your idiotic Brexit bullshit.”

The actress who rose to form on TV’s Baywatch added: “And the USA ? This toxic coward of a President He needs to rally his base? – You are selfish and cruel. You have taken the entire world backwards. You are devils and liars and thieves. And you will ROTT And WE WILL RISE.” 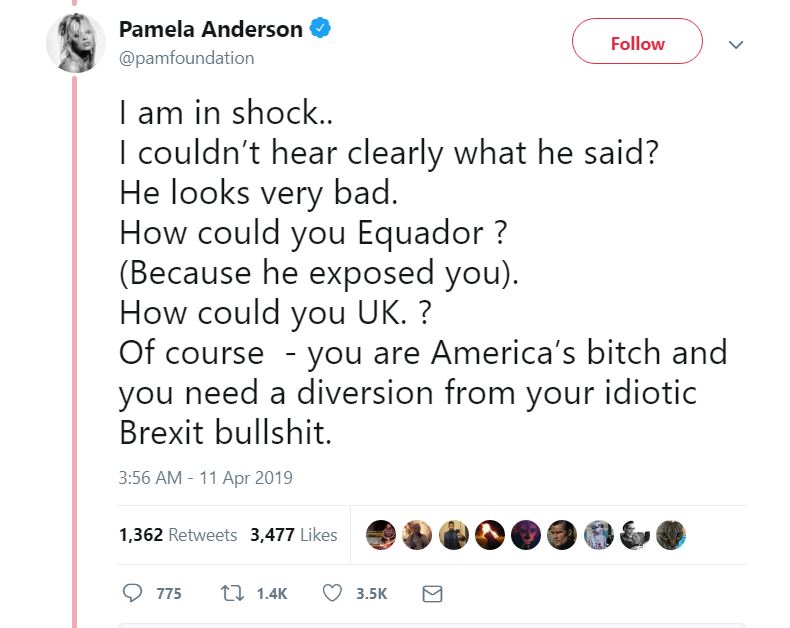 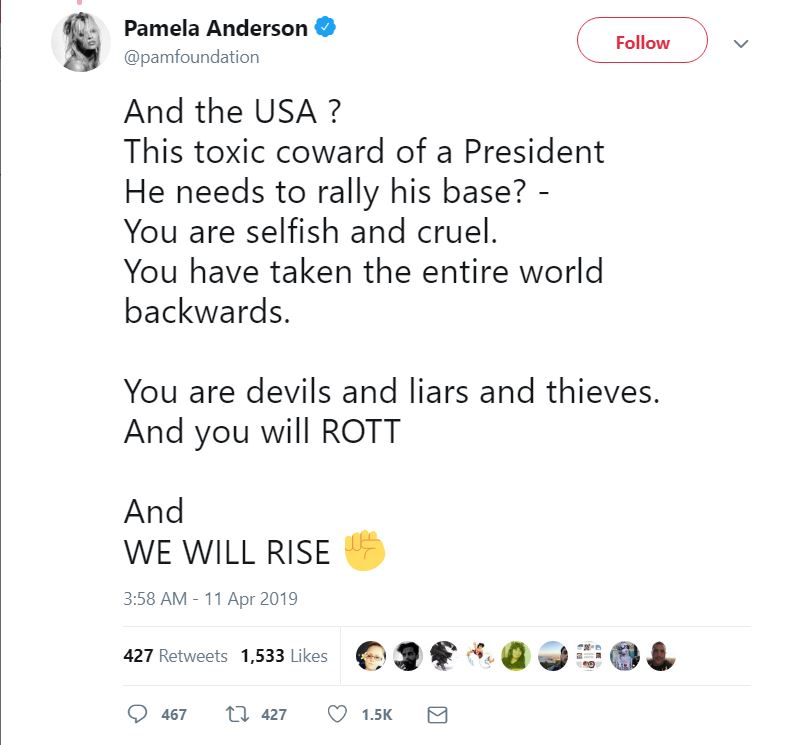 Scotland Yard said Assange, 47, was taken into custody at a central London police station and will appear in court ‘as soon as possible’.

Assange, who was born in Australia, was wanted for failing to appear in court in June 2012, confirmed last year by a Magistrates court despite Sweden dropping their request to interview Assange over rape allegations.

Julian Assange was “further arrested on behalf of the United States authorities, at 10:53hrs after his arrival at a central London police station,” revealed a statement by London’s Met Police, adding:  “This is an extradition warrant under Section 73 of the Extradition Act. He will appear in custody at Westminster Magistrates’ Court later today.”

Blackmailers had allegedly threatened to release footage of his life inside the Embassy which may have prompted today’s events.

Ecuador’s president Lenin Moreno has denied that external pressure from other countries had influenced this decision concerning the status of Assange.

But just days ago Ecuador’s president was reported as saying Assange had repeatedly violated the terms of the deal he had struck up with the embassy.

a legal expert weighed in on the extradition prospects and implications of the Wikileaks man’s arrest.

A Scotland Yard spokesman said: “Julian Assange has today been arrested by officers from the Metropolitan Police Serviceat the Embassy of Ecuador, Hans Crescent, Knightsbridge, on a warrant issued by Westminster Magistrates’ Court on 29 June 2012, for failing to surrender to the court.

“He has been taken into custody at a central London police station where he will remain, before being presented before Westminster Magistrates’ Court as soon as is possible.

“The MPS had a duty to execute the warrant, on behalf of Westminster Magistrates’ Court, and was invited into the embassy by the Ambassador, following the Ecuadorian government’s withdrawal of asylum.”

While on bail he took refuge in Ecuador’s embassy in August 2012 to avoid extradition to Sweden for questioning over allegations over sexual offences, which he has denied.

Assange could still be extradited to Sweden as well as the US.

In 2015, Sweden’s statute of limitations expired on several of the less serious allegations, and in May 2017, the Swedish chief prosecutor dropped the rape investigation, and rescinded the arrest warrant for Assange, but this was mainly because Assange had frustrated proceedings by hiding in the Ecuadorian Embassy..

Assange technically could still be charged with the more serious offense of rape in Sweden. The statute of limitations on this particular allegation expires in 2020, so Assange could still end up in Swedish custody.

If he is not extradited, Assange faces being deported – either to his country of birth, Australia, or to Ecuador, where he holds citizenship.