Three suspects held on suspicion of attempted murder following the incident in east London, although no injuries reported 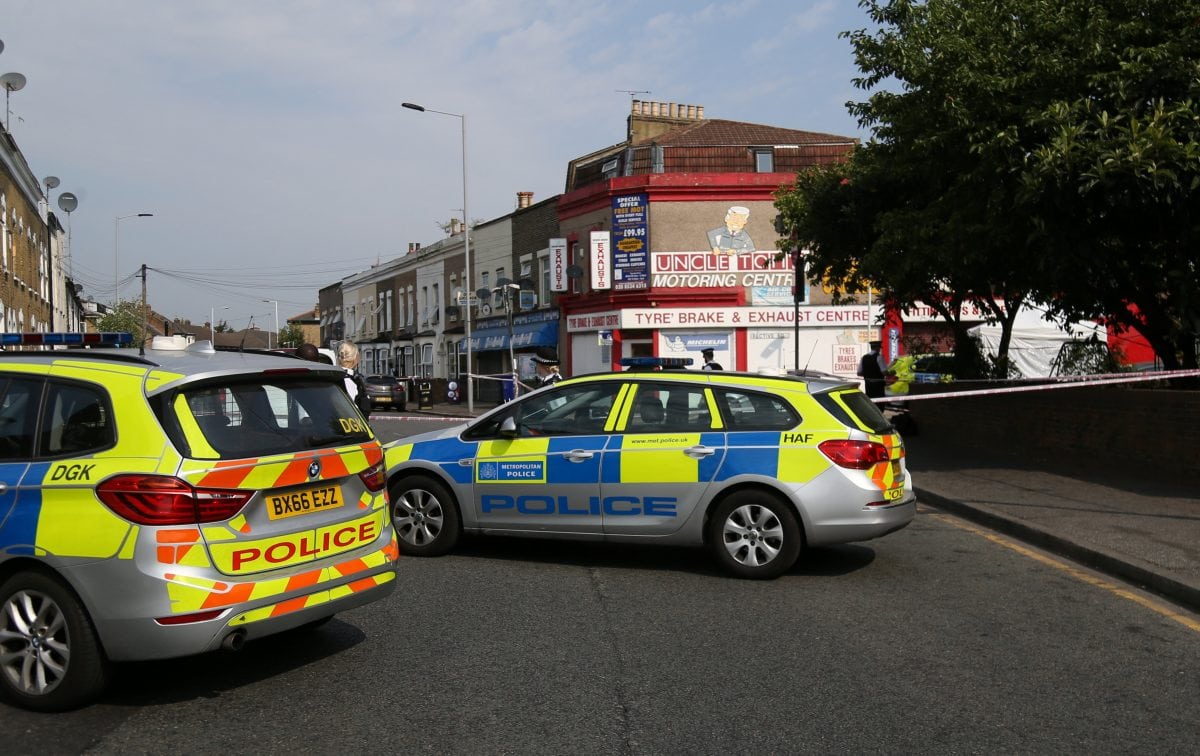 Armed cops were involved in a shootout with gangsters during a dramatic high speed car chase across east London.

Police were shot at as they tailed a car that failed to pull over following reports of an armed man being spotted in the Leytonstone area late last night (THURS).

The chase ended a mile-and-a-half away in Bective Road, Forest Gate, where eye-witnesses described an exchange of gunshots between police and three suspects in the car, although no-one was injured.

Today a police cordon has been set up at the scene – with fearful residents watching on as forensics officers got to work.

A tyre shop, Uncle Tom’s Motoring Centre, has had to close for today due to the continuing police investigation.

At the cordon, a mechanic who saw the shootout claimed that a gunman “got out of his car and started shooting at police.”

Inside the cordon, two large tents have been erected, which a policeman confirmed contained the suspects’ car and a marked police BMW X5.

Shocked neighbours said that ‘up to 50 police’ swamped the road at around 11pm last night.

A woman who gave her name as Alison, who has lived on Bective Road for 20 years, said she had “never seen anything like it.”

“When I came out there were just so many police.

“A man dressed all in black was leaning on a car removal van, he had a rifle type gun and was shouting to ‘get down’.

“The police had two men laying down in the road and one man up against the wall.

“I could hear them say the men were arrested for firearms and an offensive weapon.

“This kind of thing doesn’t happen on my road; I usually feel safe, but not now.”

Neighbour Parmimder Doal, 20, said: “The road erupted in shouting – it was really aggressive.

“There has never been that many blue lights. I saw around 50 police officers all over Bective Road.

“They blocked the entire road there was so many – with jeeps and cars.

“I was shocked to see that many police turn up quickly.”

Another neighbour said: “There was gunfire.

“I heard three or four gunshots in the space of a second.

“When I first heard the noise I thought that something heavy had fallen over or something had blown up.

“Then as soon as I heard the sirens I knew something suspicious was going on.”

A Scotland Yard spokeswoman said: “Police were called at around 10.45pm on Thursday night to Lascelles Close, Leytonstone, following reports of suspects seen in possession of a firearm.

“A short time later a vehicle was seen nearby which failed to stop for police and a pursuit was authorised.

“During the pursuit, a number of shots were fired towards officers.

“Police firearms were discharged. There are no reported injuries.”

She added: “Three people were arrested on Bective Road, Forest Gate, on suspicion of attempted murder.

“They have been taken to an east London police station where they remain in custody.”

She said the Directorate of Professional Standards has been informed as is routine when police fire their weapons and added: “This is not being treated as terror-related.

“A firearm has been found in the car.”