A crowd-funded anti-Brexit bus that quoting government figures for the cost of leaving the EU launched today, but got stuck on London’s narrow streets. The “Is It Worth It?” campaign bus is making 33 stops on an eight-day tour of the UK. The bus is in Brexit Bus red, but instead of the much back-tracked on […] 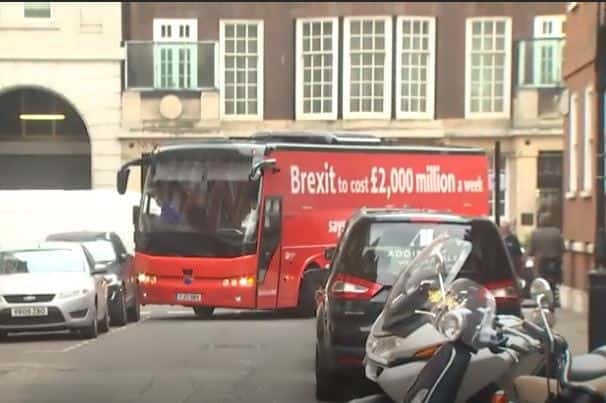 A crowd-funded anti-Brexit bus that quoting government figures for the cost of leaving the EU launched today, but got stuck on London’s narrow streets.

The “Is It Worth It?” campaign bus is making 33 stops on an eight-day tour of the UK.

The bus is in Brexit Bus red, but instead of the much back-tracked on claim that Brexit will give Britain an extra £350 million a week to spend on the NHS, this bus has the slogan: “Brexit to cost £2,000m a week says the Government’s own report. Is it worth it?”

Figures are based on the Government’s own leaked Brexit impact assessments that found leaving the EU, even if a proper free trade agreement is reached, will cost the UK 5% growth over the next 15 years.

Though the bus thankfully avoided driving off a cliff edge, in enough material for a handful of political analogies, the bus “remained” in London, stuck in the capital’s narrow streets trying to navigate Westminster, the driver forced to do a u-turn.

In other controversy for the “Is It Worth It Bus,” Conservative Oxfordshire County Council banned the bus from parking up in Oxford next Monday. John Tanner, secretary of the Oxford European Association, called it an “extraordinary” attack on free speech. But the Tory council insisted it would not “permit political advertising on the highway”.

In last year’s General Election eagle-eyed people spotted that Theresa May’s battle bus had the same number plates as the Vote Remain bus from the EU referendum from the summer before:

If you check the numberplate, Theresa May is now touring the country in last year's "Remain" bus. pic.twitter.com/TV2DE2VyZo