A group from Class War arrived at Carrie Symonds’ south London apartment, claiming Johnson wasn’t even fit to be a “Pie Minister”

by Steve Beech
in News, Politics 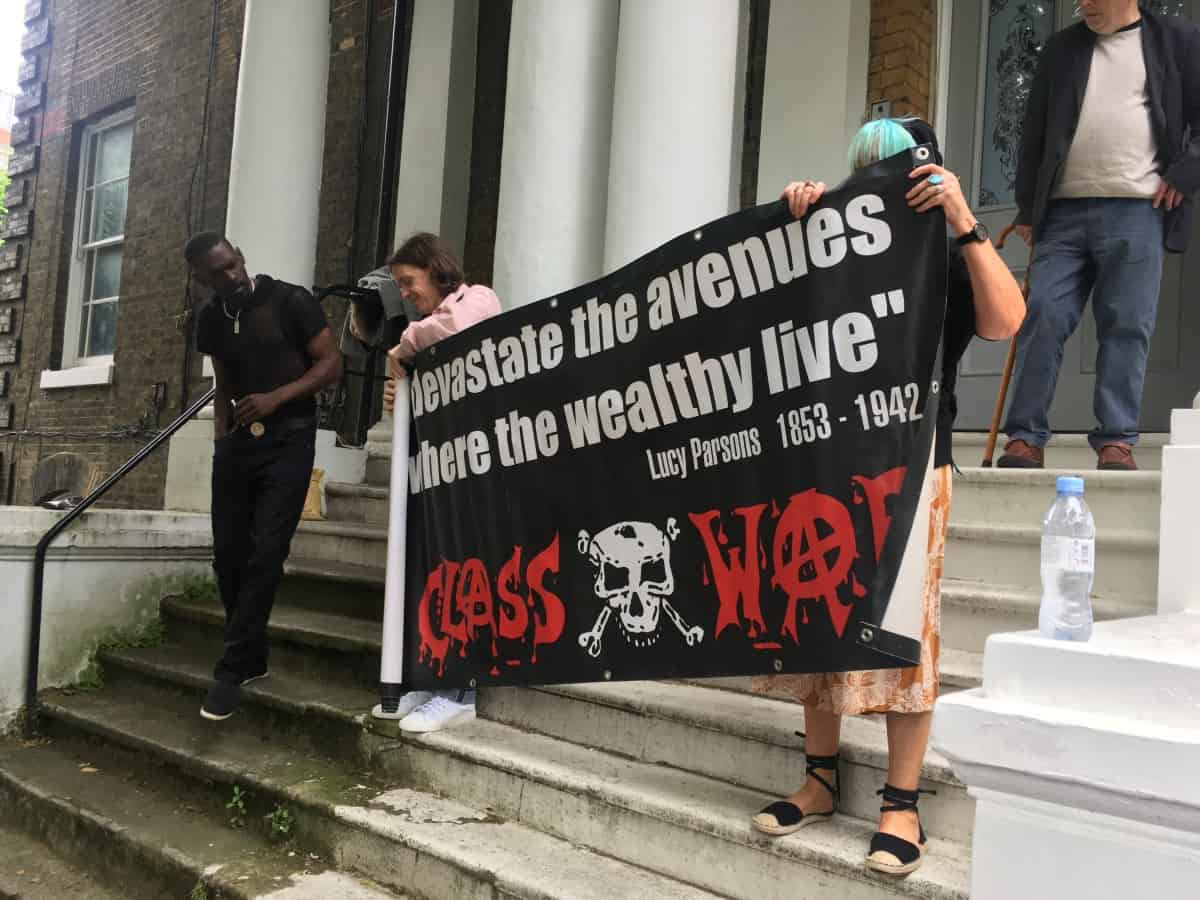 Anarchists staged a protest outside the flat where police were called following a row between Boris Johnson and his girlfriend.

A group from Class War arrived at Carrie Symonds’ south London apartment, claiming Johnson wasn’t even fit to be a “Pie Minister”.

Six members of the anti-establishment group – including veteran protestor Ian Bone, once described as “The Most Dangerous Man in Britain” – turned up outside the Grade II Listed building just before 2pm in Sunday.

They said they wanted would-be Prime Minister Johnson out of Camberwell, and would be happy if he “left the planet”.

The veteran anarchists said they were sick of “old Etonians running the country”.

Two women held a sign that read “we must devastate the avenues where the wealthy live”.

They shouted that they’d “had enough of Tory violence against women”, referencing the incident between MP Mark Field and a Greenpeace protester as well as Mr Johnson.

One of the Class War mob – holding a sign that read “Camberwell welcomes migrants not Boris” – said she would be happy for the Tory leadership candidate to “leave the planet”.

Asked if she would like Mr Johnson to leave the area, she said: “Absolutely – I’d like him to leave the planet.

“I want Boris out of Camberwell and the British out of Ireland.

“We don’t need old middle class white men telling us what to do.

“Go back to Eton or Highgate or wherever it is white middle class men come from.

“I’m not asking for segregation, I’m asking Boris to f**k off out of Camberwell.”

She added: “People who preach hate speech are not welcome in our community.

“The policies he’s going to put in are racist policies.

“I’m not angry with Boris for what he’s says, I’m angry at Boris because he exists: the fact that the likes of him tell us what to do and how to do it.”

Another activist shouted: “Enough of Tory violence against women.

“Boris – the next time you smack a woman we’ll be there.”

Bone, 71, who walked with a stick, ranted: “No more old Etonians, no more feudal aristocracy.

“Come on out Boris! We know you’re hiding under your f**king chaise longue.

He added: “Boris, when you look out of your window we’ll be there.

“When you look down the street, we’ll be there.”

Come down from the steps outside the flat, he said: “We’ve had enough of old Etonians running the country.

“They’re all a cabinet of old Etonians. Why we put up with it I don’t know.

“On the day Boris is declared Prime Minister there’ll be a blockade at Downing Street to stop him getting in or round to see the Queen.

“Boris is an arrogant toff who pushed a woman around – that’s what the feudal elite are like.”

Asked if Johnson is fit to be Prime Minister, Bone said: “He certainly ain’t – he ain’t even fit to be a Pie Minister.”

The protesters moved on after about 20 minutes.

Mr Johnson and Ms Symonds have not been seen at the flat since police were called there in the early hours of Friday.