It is a story that will melt your hearts, like the sun melts his ice-pops, after over £150,000 was raised on-line for an old Chicago ice-pop vendor, who had been snapped pushing his cart in some difficulty. Fidencio Sanchez, 89, from Chicago, had to come out of retirement after his daughter passed away and needed […] 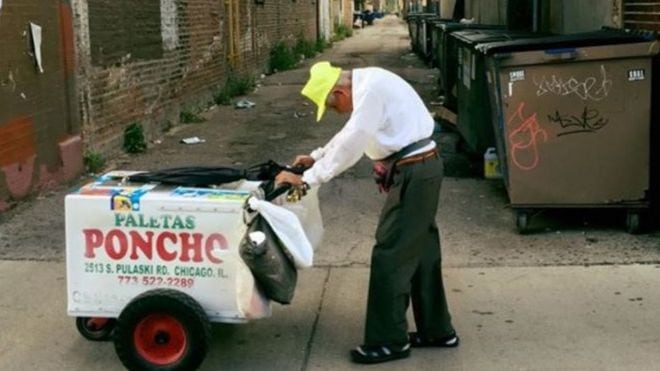 It is a story that will melt your hearts, like the sun melts his ice-pops, after over £150,000 was raised on-line for an old Chicago ice-pop vendor, who had been snapped pushing his cart in some difficulty.

Fidencio Sanchez, 89, from Chicago, had to come out of retirement after his daughter passed away and needed money to care for her children, after he was given custody of them

A total stranger opened a GoFundMe page after seeing the distress Sanchez was in. Money poured into the fund and the life changing money will help support his granddaughters.

Reportedly he will carry on working in the Little Village area of Illnois, where he had been in the trade for over twenty years.

He had only been retired for a couple of months when his daughter tragically died in July. His wife used to work with him in the business but she had to stop working due to her poor health.

“We thought, what are we going to do? We have to pay the bills. I wake up early and (work) all day until eight at night,” the Spanish-speaking vendor told ABC News through a translator.

Cervantes Macias saw the Sanchez and it moved him to set up a funding page, he was aiming for three thousand dollars, but picture has touched the hearts of many and the money is still flooding in. The target was smashed within the hour

The story is reminiscent of Alan Barnes, a frail man from Gateshead, who was beaten up and left for dead. A funding page for him raised a huge six-figure sum. He eventually asked people to stop sending him money.