Now the picture is to be auctioned off to raise funds to protect this rare big cat who get their pigment due to a gene mutation. 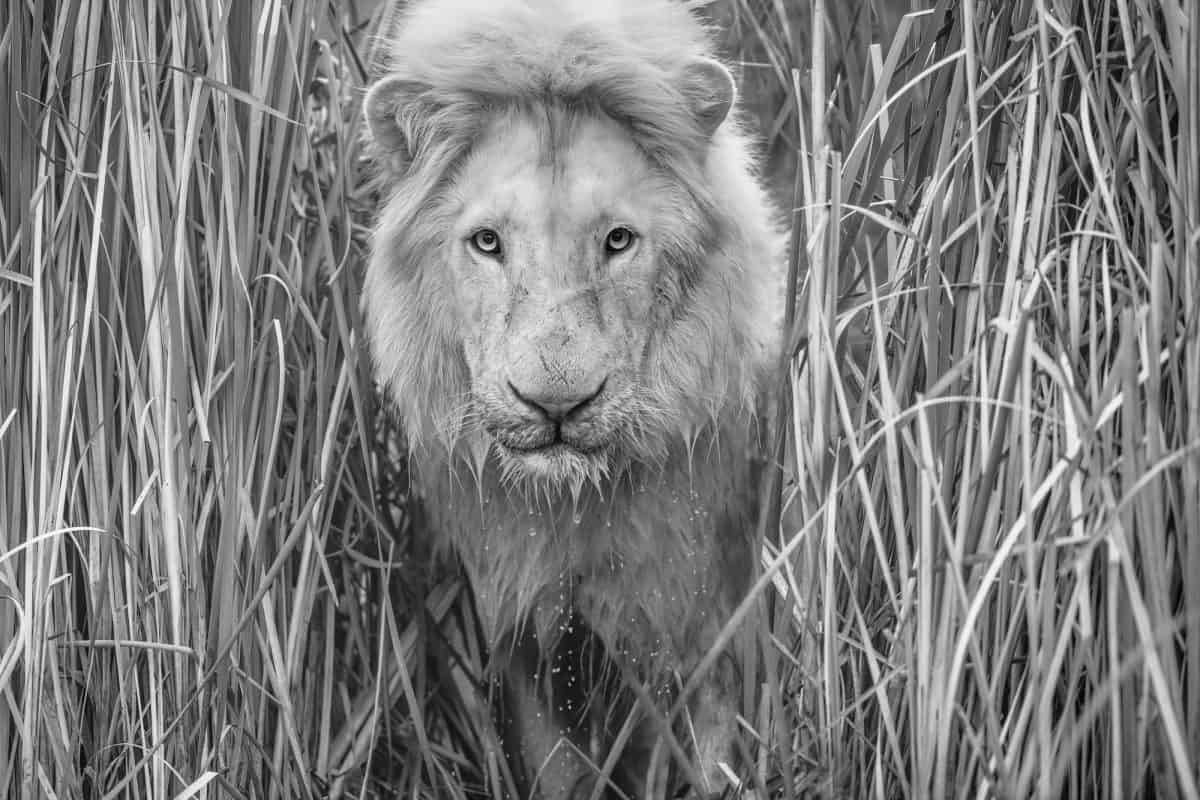 World-renowned photographer David Yarrow immersed himself in water up to his neck in a cage to get this amazing shot of a white lion in the wild.

David, who has photographed the likes of supermodels Cara Delevigne and Cindy Crawford went to the extreme lengths to photograph the critically endangered creature.

He had to wade into a South African swamp and clamber into a cage with just his head above the water to take the photo – which he has titled NARNIA (corr).

The picture is due to be auctioned in London to raise funds to protect iconic breeds including snow leopards.

“Every time something rubs your leg, you imagine it’s a water snake or a small croc. On the flip side, it is the best way of cooling down on a hot African afternoon.

“I wanted to be below the eyes of the lion and this meant that only my head and camera were above the water level.

“The 200mm lens I shot this with is not light and of course I could not put it down.

“This male lion is a white lion – he has a mythological look – something pulled out of a fairy-tale (hence the title of the image).

“The eyes in the photograph are pivotal – he is right on me and has a look of clear intent.

“Our eye is grabbed and then it is a little difficult to look anywhere else.

“It’s somewhat reminiscent of the famous 1914 enlisting poster with Lord Kitchener’s pointing finger and the words ‘Your Country Needs You’.

“The clarity of the lion’s face and the water drops make the image, which is well framed. Adult male white lions are a joy to photograph – there is a sense of gatecrashing a fairytale.

“This is a very big lion and no matter the fact that I was in a cage, the heart was beating for sure.”

Members of the public will be able to view NARNIA at the Hari Hotel in Belgravia from September 13, where it will form the centrepiece of the ENCOUNTERS photographic exhibition before going under the hammer.

Yarrow’s iconic images sell for over $100,000 US and have seen him collaborate with the likes of Cara Delevigne and Cindy Crawford, as well as brands like Land Rover and TAG Heuer and UBS.

Prince William is known to be among his many admirers.

All proceeds from this sale will go towards The White Lion Foundation, which undertakes conservation work around the world and helps badly endangered animals like snow leopards, white lions, rhinos and sea turtles.

The White Lion Foundation Director Shirly Galligan said: “We are thrilled that David Yarrow is supporting our charity and gifting us NARNIA to auction.

“It’s an extraordinarily powerful image, notable for the stunning detail and the rawness created by the lion seemingly oblivious to the photographer’s presence.

“It will be a highly-prized piece and the funds raised will go towards our work to lionize global wildlife conservation and welfare.”

The picture has a reserve price of £25,000 and the charity is taking sealed bids.

Pictures taken by other photographers in the exhibition such as Will Burrard-Lucas will also be available to buy on the night.