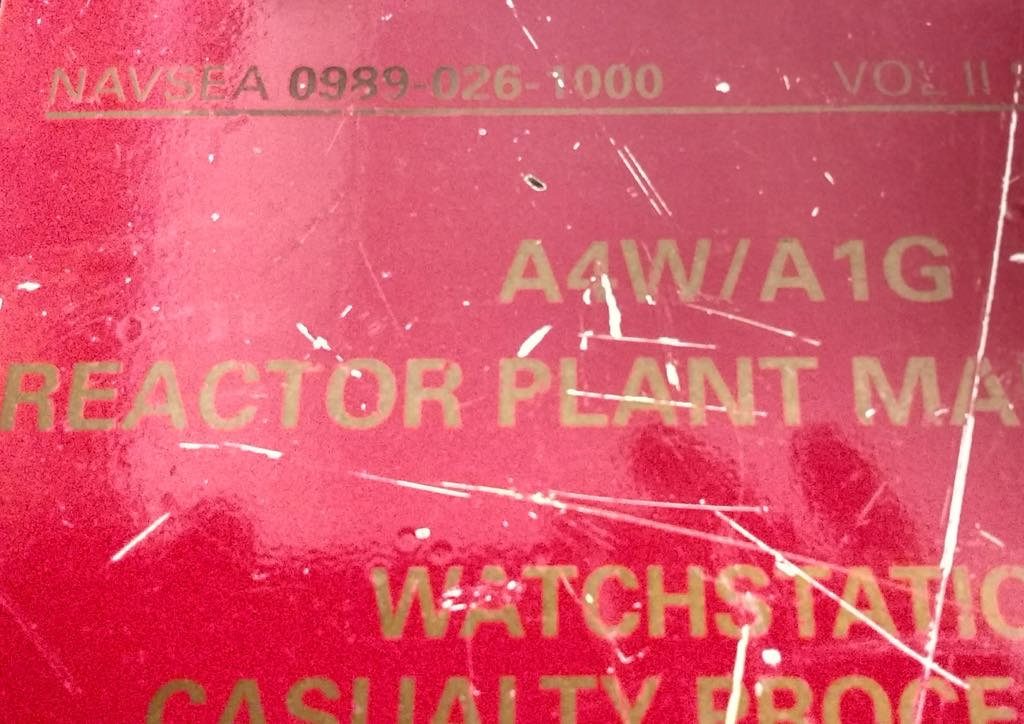 A man was stunned when he discovered a ‘confidential’ operation manual for a US Navy aircraft carrier nuclear reactor – washed up on a beach.

Ian Le Breton was walking his dog when he discovered the manual’s cover headed with a warning of ‘confidential’ and ‘restricted data.’

He initially thought it may have been a relic from the Second World War and stored it in his shed.

But he was stunned after carrying out some research to discover it was from a nuclear reactor that powers the biggest warships in Navy history.

It is also marked NOFORN that stands for no foreign nationals; a term still used today by the US government when describing classified information.

There is no indication how or when it ended up in British waters but it was suggested it may have been thrown overboard or ended up in the wrong rubbish bin.

Ian, 59, of Rozel in Jersey, has now posted pictures of his find on Facebook and wrote: “Found on the rocks at L’etacq. Front cover of an A4W/A1G Reactor Plant Manual.

“The content, which was not present, is restricted by the Atomic Energy Act of 1954.

“If any body knows somebody in the Naval Systems Command, Navy Department, Washington D.C. they may have some idea how it got there?”

Two A4W/A1G reactors power each of the US Navy’s ten Nimitz class carriers – the biggest warships ever built.

Ian, a retired customs and immigration official who has four grown up children, said several people who have seen his post said they were pursuing the matter with contacts in the US Navy.

He said: “I was just doing some normal beachcombing and keeping my eye out for anything washed up with the sea.

“I was walking my dogs when I found out but then just stored it in my shed. I brought it out again at the weekend and put it on Facebook.

“It was a very interesting find. I initially thought it had been left over from the Second World War and a certain amount of waste had been dumped over the cliffs there at the time.

“I didn’t really look it up or google it. I just saw the word nuclear and presumed it was from then. I then put it in the shed and forgot about it.

“But last week I put it on a local Facebook page Unseen Jersey and it has had a big reaction.

“Different people say they have different contacts in the US Navy and will ask about it.

“It is impossible to say if it is still in use. The regulations it refers to were created in 1954 so it is from sometime after that.

“By the corrosion on the metal I would say it has been in the sea for a number of years.

“It is well corroded and smudged – but although it has clearly been knocked about it it is not particularly worn.

“Having looked at it again there is no indication that there was any need for it to be in waters in this part of the world during any recent activities so it must have travelled a long distance.

“I can’t imagine one of these carriers just popping into the English channel.

“I am not sure how you would lose a cover manual overboard but there was a theory it could have ended up in the wrong trash bin.

“It is intriguing and does seem to have caught people’s imagination.”

Among those to respond to Ian’s appeal was Nicholas Thorne who wrote: “This information was subject to NOFORN (no foreign nationals) and ITAR (International Traffic of Arms Regulations)

“These caveats are still both in use today by the USA Government for classfied material/information.

“Probably just fell overboard, or otherwise someone put a coffee stained copy in the gash (rubbish) incorrectly and it got chucked overboard.”