Far from being a 21st Century form of torment, Scottish scholars found that the controversial technique dates back more than 700 years to 14th Century France 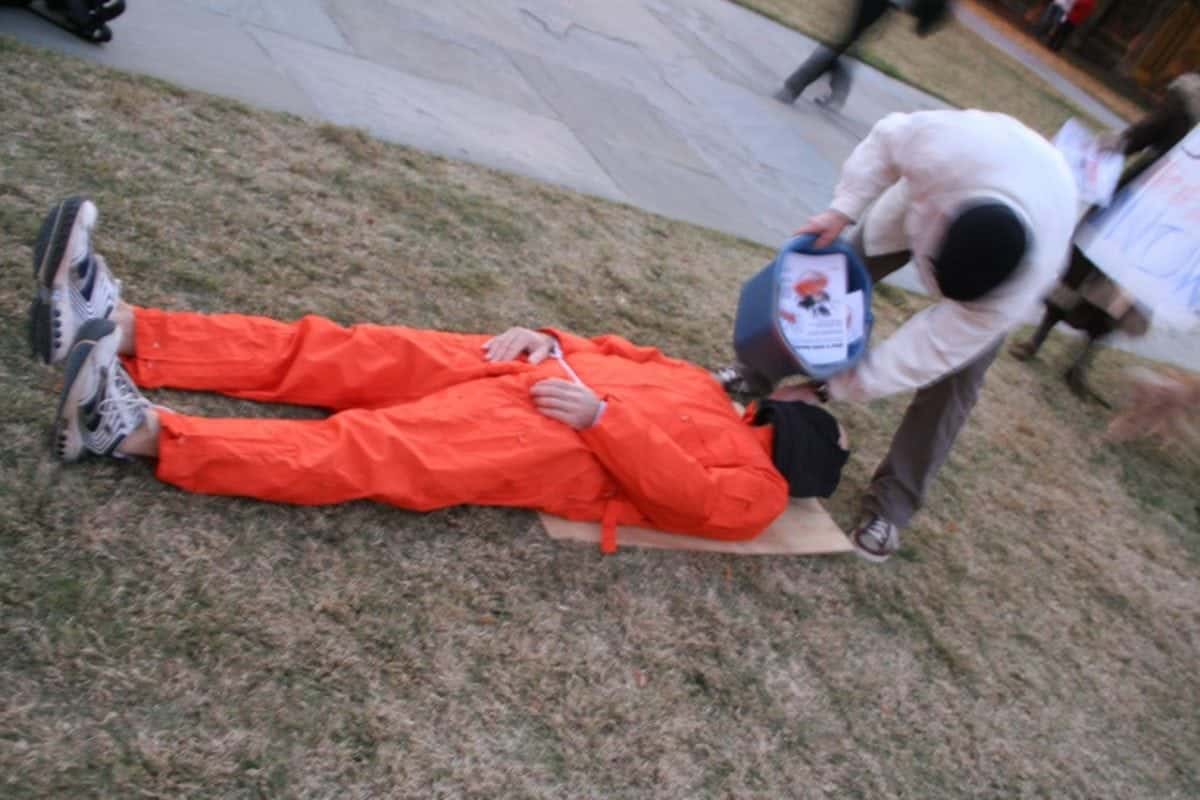 Waterboard torture – used by the CIA to interrogate prisoners at Guantanamo Bay – was regarded as barbaric even in the Middle Ages, according to new research.

Far from being a 21st Century form of torment, Scottish scholars found that the controversial technique dates back more than 700 years to 14th Century France.

New research from the University of St Andrews sheds light on the historical use of waterboarding as a severe form of torture and its present day re-emergence.

The study, published in the journal International Relations, concentrates on the historical evidence of waterboarding from medieval Europe, and the modern re-emergence and endorsement of the technique by US security agencies.

Waterboarding is an interrogation technique simulating the experience of drowning, in which a person is strapped head downwards on a sloping board or bench with the mouth and nose covered, while large quantities of water are poured over the face.

Post-9/11, waterboarding was adopted by the CIA as a form of torture to extract intelligence, much of which has since been documented through Senate Committee hearings and in the media, to widespread condemnation.

Soon after entering The White House, President Barack Obama signed a new Executive Order in 2009 barring the CIA from using harsh interrogation methods beyond those permitted by the US military.

The study suggests that in 2018, in Trump’s America, there is a growing trend towards a permissive stance on waterboarding and its re-emergence at the highest levels of American government.

Gina Haspel, accused of overseeing waterboarding at CIA black-sites, was this year confirmed as Director of the CIA.

President Trump promised that he would “bring back a hell of a lot worse than waterboarding” because we’re “living in medieval times” and fighting “violent people, vicious people”.

But even medieval interrogators considered waterboarding one of the cruellest techniques of the torture chamber, according to the research.

Dr Rory Cox, lecturer in Late Medieval History at St Andrews, notes that debates regarding the utility and morality of torture date back to the ancient world.

He said Aristotle observed that “evidence from torture may be considered utterly untrustworthy”, while Roman jurists warned that the information obtained “is weak and dangerous”.

In the Middle Ages, he said those who existed on the periphery of “civilised” society – slaves, Jews, heretics – lacked legal protections and were more likely to be tortured.

Dr Cox says parallels could therefore be drawn between that and the modern treatment of minorities or those detained as part of the War on Terror.

Historically, Dr Cox shows that waterboarding and other tortures were used to extract confessions, but also to punish, intimidate, or exact vengeance.

He said public spectacles of torture allowed authorities to communicate power and enabled the public to participate vicariously in the punishment of people who had injured the community.

Dr Cox said that perhaps support for waterboarding in modern day America also satiates such desires, as a continuing revenge for 9/11 and other attacks.

He said waterboarding was regularly employed in the French judicial system from the 14th Century up until the late 18th Century, where it was used if the strappado – hoisting by wrists bound behind the back – was unsuccessful.

In 1651 the diarist John Evelyn described a French prisoner as being “to all appearances dead with pain” after a waterboarding session.

Dr Cox said the lack of external physical scarring produced by waterboarding has been crucial to its modern characterisation as ‘torture-lite’.

However, medical and psychological research shows that physical pain is not the most important determinant of traumatic stress in victims of torture.

He said waterboarding has a distinctive capacity to induce rapidly the panic and pain of impending death: the “poor wretch is in the same agony as persons ready to die”, as a 17th-century Dutch chronicler described it.

In more recent times, French-Algerian journalist Henri Alleg recalled the “insupportable agony” of being waterboarded by French soldiers in 1957.

Dr Cox said: “Since the Middle Ages, waterboarding has been judged to be worse than flogging, racking, and the strappado: techniques that any sane person in a modern liberal democracy would baulk at defending or excusing.

“This history seriously undermines re-imaginings of waterboarding as ‘torture lite’.

“If even medieval society – so commonly condemned as barbaric – recognised the brutality of waterboarding, then we should be ashamed that in the 21st Century some are willing to condone it.”

He added: “Those who have authorised or employed waterboarding, or would seek to do so, violate U.S. domestic law and international law.

“Such individuals should be criminally prosecuted; they should not lead the U.S.’s foremost intelligence agency or sit in the Oval Office.”