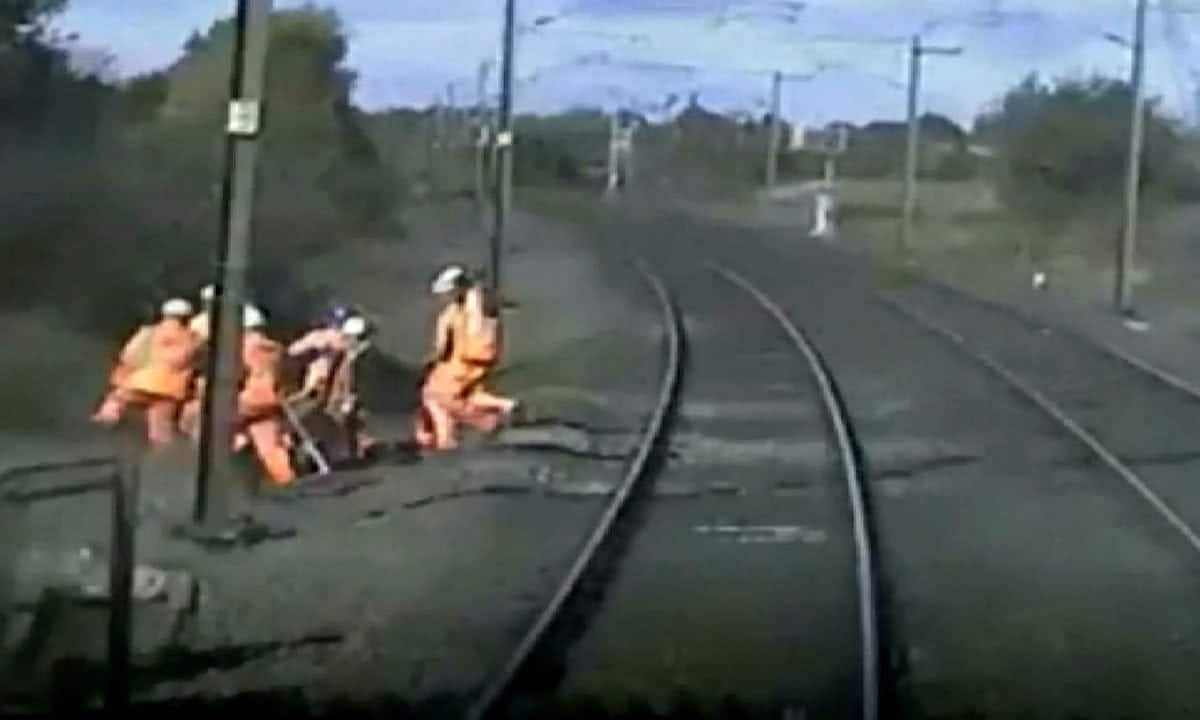 This is the heart-stopping moment a group of railway workers avoided death by just ONE SECOND after they were forced to dive out of the way of an oncoming train.

The terrifying near-miss was captured by on board cameras as the locomotive thundered towards the men at 125mph.

Dramatic footage shows the workers scrambling clear of the approaching vehicle as it hurtled along the tracks near Egmanton level crossing in Nottinghamshire.

A report by the Rail Accident Investigation Branch (RAIB) has now exposed the shocking safety blunder and revealed the group were working in unsafe conditions. 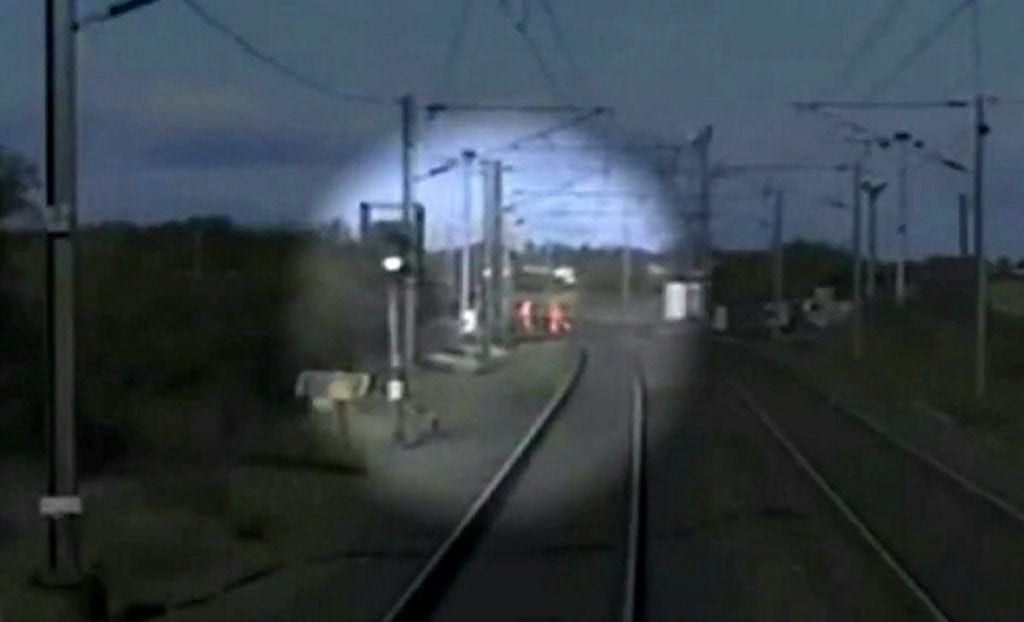 The incident occurred on the East Coast Main Line a mile outside Tuxford, Notts., at around 11.22am on October 5 last year.

The driver of the passenger train had spotted the workers in the distance and repeatedly sounded the horn – but they failed to respond.,

The report revealed one of the group eventually shouted a warning to three others who cleared the track with just one second before the train passed them by.

The RAIB said the person in charge, employed by Network Rail , had them working under an “unsafe and unofficial system of work”

Simon French, chief inspector of rail accidents, said: “In this investigation, RAIB found that the person in charge had adopted an unsafe method of working in an attempt to undertake additional unplanned work.

“Both the person in charge and team members became distracted, and the result was that three of them found themselves jumping clear of a train travelling at 125 miles per hour with just one second to spare.

“This came so close to being a major tragedy. We have seen this sort of unsafe behaviour before, where the wish to get the work done quickly overrides common sense and self-preservation.

“When we see narrowly avoided tragedies of this type, it is almost always the result of the adoption of an unsafe method of work and the absence of a challenge from others in the group.

“We are therefore recommending that Network Rail looks again at how it monitors and manages the safety leadership exercised by its staff, and how they interact with contractors.” 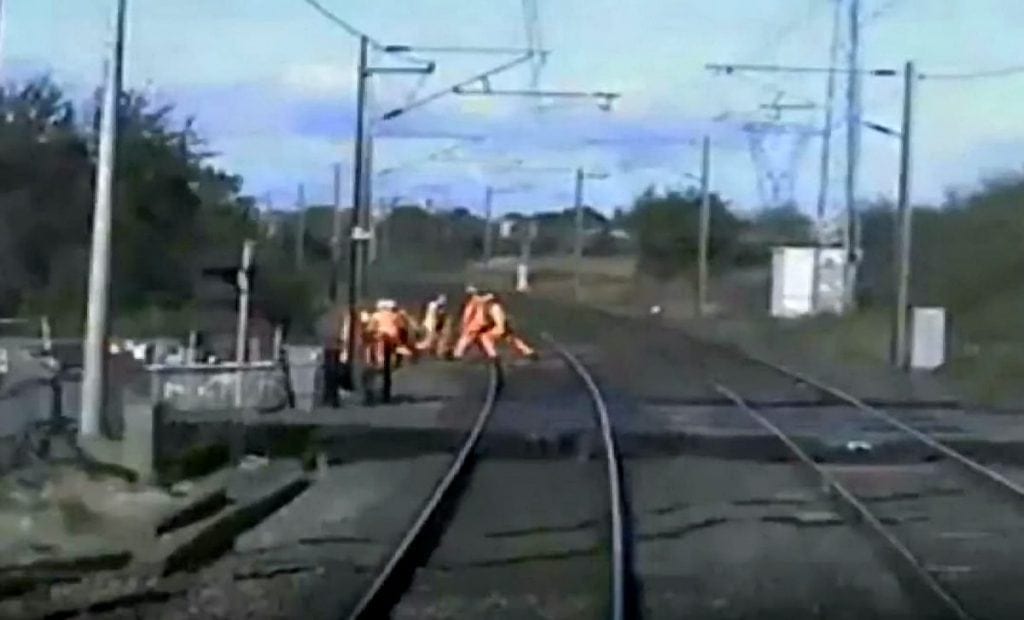 During the terrifying video which has been released by Network Rail, the train driver recalled how he believed he had killed the men because he closed his eyes.

The driver, who is not identified, says: “I saw a tiny bit of orange after the crossing and it was obscured by trees. Another second later and I could see a group of people.

“I put the whistle up again but didn’t get any response. About 300 yards from it everything becomes clear and I’m just looking at them thinking “f***ing hell”.

“There were just five blokes on the track and at this point I’m just swearing. There’s nothing I can do about it. I just shut my eyes and felt a bit of a bump.

“I came to a stand about a mile later at Tuxford and I’m thinking f***ing hell I’ve killed five blokes.” 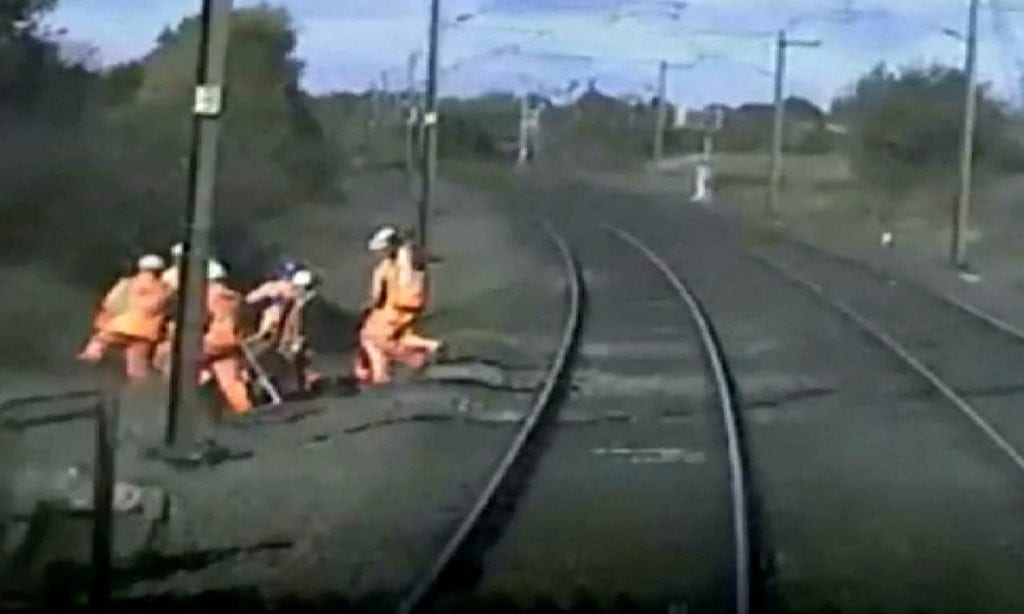 A Network Rail spokesperson said: “Safety is our top priority and we take incidents such as the one at Egmanton extremely seriously and we have worked closely with the Rail Accident Investigation Branch on this report.

“We work hard to prevent incidents like this happening and we have already begun to implement the recommendations made.”