A teacher who was bullied as a schoolboy for being gay bravely came out to 1,000 of his pupils during a school assembly. Daniel Gray made the bold decision to be open about his sexuality after being told to keep it a secret while training to be a teacher. But after coming out in an […] 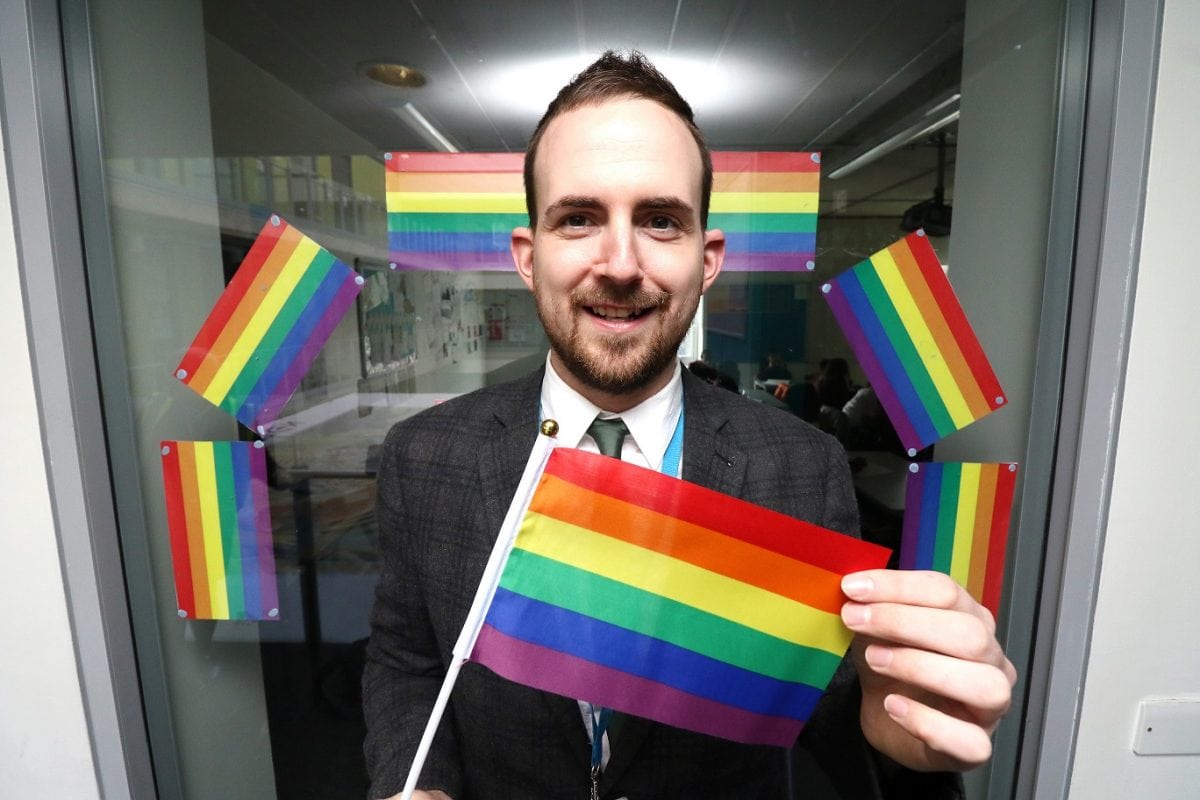 Daniel Gray a teacher at Harris Academy in Croydon. See National copy NNGAY: Walking through Harris Academy South Norwood, it appears like any other school, as it proudly showcases its pupils' achievements. However, amongst children's artwork and awards, the halls are decorated with rainbow gay-pride flags. That is because the secondary school is leading the way in promoting diversity and celebrating LGBT (lesbian, gay, bisesxual, transgender) rights. And it is all down to one teacher, Daniel Gray - who took the brave decision to come out to 1,000 students.

A teacher who was bullied as a schoolboy for being gay bravely came out to 1,000 of his pupils during a school assembly.

Daniel Gray made the bold decision to be open about his sexuality after being told to keep it a secret while training to be a teacher.

But after coming out in an assembly, the 32-year-old teacher has been inundated with support from staff, current and former pupils at Harris Academy South Norwood, in Croydon, south London.

Back when Daniel was at a schoolboy, he was bullied for being gay even though he didn’t know it himself at the time.

Daniel said: “Every single day I was pushed in corridors, I was called names, I was insulted, I was sworn at, spat at and I had stones thrown at me.

“All because students suspected I was gay, I didn’t even know I was at this point.”

And when Daniel approached a teacher to report the bullying, he and a friend were told this was just something they would have to accept if they were openly gay.

He said: “There was no one really visible to help me, so I had to help myself.”

And when he decided to become a teacher, Daniel was told to keep his sexuality a secret from his pupils, in case they used it against him.

Daniel said: “I was told categorically when I started to train to be a teacher nine years ago not to come out to my students.

“They said you don’t want to give them any more ammunition than they’ve already got, and that’s really a very depressing and very sad way of looking at it.

“It’s assuming the students are out to get you.” At previous schools, Daniel felt he had to avoid answering particular questions from students.

Daniel said: “It’s not like teachers are here to talk about their personal lives – they’re not – but my not talking about my life, it’s excluding those who feel like they can’t fit in.

“It’s always felt like I was withholding something. I’d never lie, but I’d change the subject.

“Luckily I haven’t had too many of those questions, but I learn about students’ lives, and it’s just who I am to want to build positive relationships.”

Determined to become a homosexual role model for Harris Academy, David recorded a video in which he came out and organised it to be played during a school assembly to mark LGBT History Month.

Careful not to make his story the main focus of the assembly, David said his admission was more of a passing comment to add context to the assembly’s theme.

David said: “I went through all the things the school was doing for LGBT History Month, and then I just said, ‘As a gay man, I know how important it is to have positive role models, and that’s why we’re doing this’.

“I was so relieved when it was done, and then the response was just like ‘OK’ and a few people shrugged. Most people weren’t even bothered.” Since coming out, Daniel said the response from staff and students has been “phenomenal”.

Other students have since approached Mr Gray for advice about coming to terms with their sexuality, and how they could come out to their friends and family.

He has even had emails from former students, who are gay, congratulating him and saying that they wish he had come out while they were at the school.

Daniel said: “Attitudes are changing, by being consistent and having a consistent message, we’re talking openly about these things for the first time.

“We hear homophobic language at school and we stamp on it straight away, and we have done for years, but I think by personalising it, it gets people thinking differently, they know someone who is openly gay and could think ‘oh, what would Mr Gray think?'”

After the assembly, a student who had never been taught by Daniel, approached him to tell the teacher how it had changed his life.

Daniel said: “The fact that that opportunity was there for him, the fact that he doesn’t feel like he’s on his own any more I think is really, really powerful.”

Comparing the way Harris Academy celebrates diversity to his school days, Daniel said: “I actually feel a bit emotional [about it].

“It’s just so powerful. The impact we have on students’ lives is immense as teachers.”

Daniel added: “I think it just takes one person to say ‘It’s OK’ for the floodgates to open and for all these kids to just accept each other for who they are.

“Even if you don’t know who you are, you maybe just feel a bit different, there’s other people out there for you.

“You can be happy, you can be successful.”