The 10-year-old has been hailed a writing sensation after her school teacher shared the poem on social media. 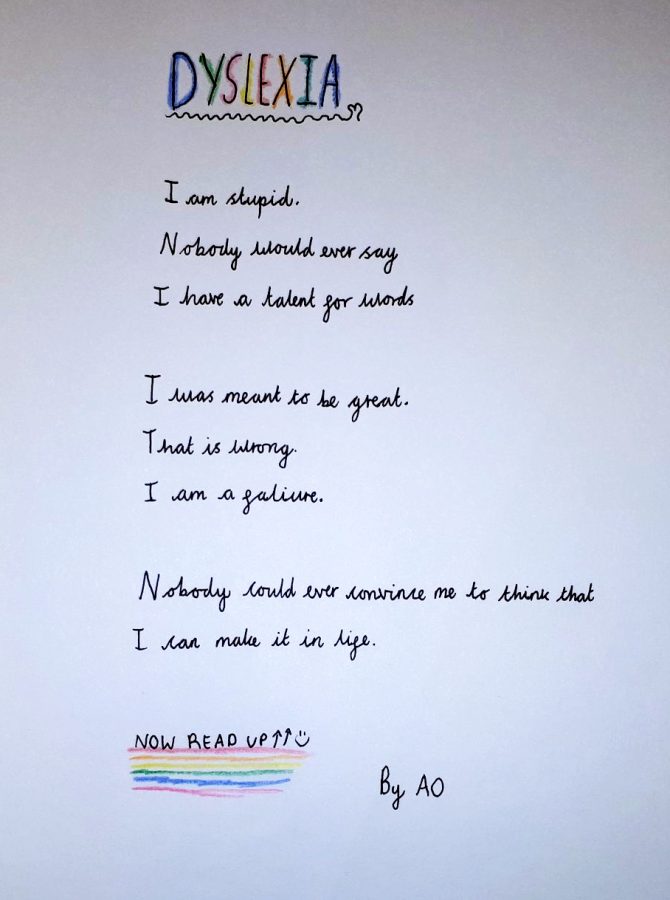 A schoolgirl’s “beautiful and powerful” poem showing the struggles of living with dyslexia has left Twitter users teary eyed – because it reads completely differently from bottom to top.

The 10-year-old has been hailed a writing sensation after her school teacher shared the poem on social media.

Jane Broadis, a year six teacher at at Christ Church Chorleywood C of E school, in Chorleywood, Herts., said she was “stunned” when she first read the handwritten poem, which can also be read backwards.

Reading normally, the poem is a sad look at how dyslexia sufferers are victimised and feel worthless.

But if the reader goes from bottom to top, it is a strong and uplifting poem about the condition.

The 49-year-old mother said: “I showed the class a poem written by an American teenager called ‘The Worse Day Ever’ which when read backwards, it gives a completely different, and more positive, meaning.

“There were two girls who really took to it and they spent all lunch time writing their own poems.

“I showed them this poem to teach them that there is a different perspective of life and when times seem difficult, things can change.

“I was absolutely stunned when this tiny and humble 10-year-old showed me the poem.

“I can’t believe she wrote something so beautiful and powerful in such a short space of time – she wrote it during her one and-a-quarter hour lunch break.”

The eight-lined poem which begins with “I am stupid” shows the struggles of living with dyslexia and the obstacles faced when trying to succeed academically.

Mum-of-three Jane said: “Many people can struggle at school because of the curriculum’s focus on English and Maths.

“I always encourage the children to write poetry in their spare time, it’s a great release for them.

“I knew this girl had a knack for words, but I was really stunned that this powerful poem came from such a little person.”

Thousands of people from across the globe have commented on Jane’s post, many of which struggled with dyslexia in school and were struck by the young writer’s words.

Another Twitter user said: “Thanks. My second grade teacher threw a paper in my face and asked if I was stupid.

“My parents got me dyslexia training… result: 2 college degrees and a 40-year career as a journalist/writer.”

Jane, who has been teaching since the 1990s said: “I never anticipated for this to happen, I’m just an ordinary primary school teacher and mum who uses Facebook sometimes.

“I think it resonated with so many people because in the past people who were dyslexic were told they were stupid and failures.

“I think a lot of people wished they were encouraged and supported in school.

“This is an amazing example of the positive power social media can have, we often teach children about the dangers of the internet but this shows the good side.”

The teacher who writes in her own spare time added that she hoped the young writer’s work could be published.

She said: “We’ve been contacted by one publisher already but nothing has been confirmed.

“She is an incredibly humble little girl and she is quite embarrassed about it all.

“Her first thought was that the picture of her friend’s poem wasn’t posted.”

The poem has been liked and shared thousands of times online.

From top to bottom, the poem reads: “I am stupid.

“Nobody would every say

“I have a talent for words

“I was meant to be great.

“Nobody could ever convince me to think that

But from the bottom upwards, the poem’s meaning changes completely.

“Nobody could ever convince me to think that

“I was meant to be great.

“I have a talent for words

“Nobody would ever say