Tanya Williams pleaded for help to save her son, Rhys, who is losing hope having suffered a rare life-limiting and agonising skin condition since he was born

by Nathan Sandhu
in Good News, Must Reads 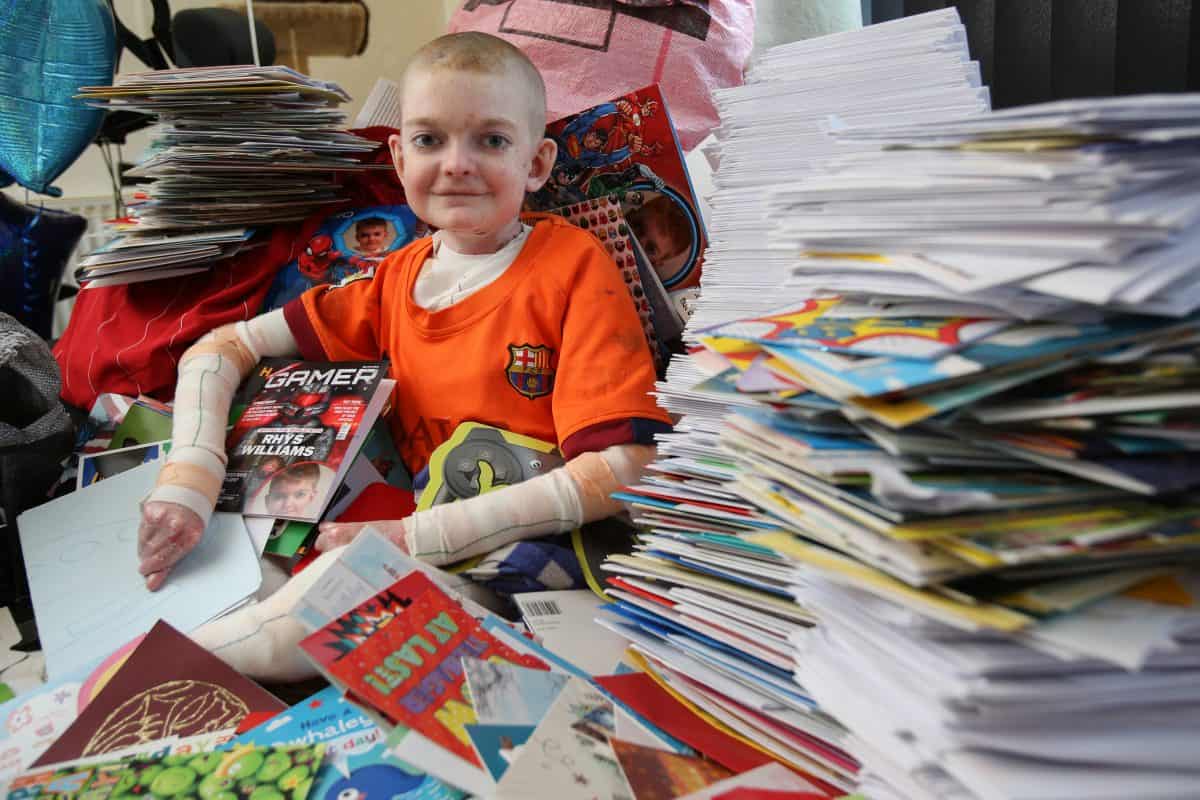 These photos show a schoolboy battling a skin condition surrounded by 10,000 birthday cards following an appeal – after telling his mother ‘I’ve had enough of life’.

Rhys Williams, 13, is “loving it” after his plight touched the hearts of well-wishers from across the world.

The youngster is living in constant pain as he battles a rare life-limiting and agonising skin condition, known as epidermolysis bullosa.

The condition which he’s suffered from since birth results in painful skin blisters, sores and has even caused his fingers to fuse together.

His mum, Tanya Williams, 36, was desperate to show Rhys he has something to fight for after heartbreakingly telling her that he wishes “a butterfly would come and take him away”.

Ahead of his 14th birthday on September 21, devastated Tanya put out an appeal asking for cards to be sent Rhys.

After hearing his touching story, thousands of people extended their well wishes to the teen.

In just a few days, he has received more than 10,000 cards as well as parcels and hundreds of online messages.

Tanya was left struggling to close her front door after the cards and parcels began to pile up – so many so that a post van arrived at Rhys’ home just for him.

His mum started to realise how far the appeal had reached when her breakfast was interrupted by a call from Liverpool Football Club’s Peter Moore.

The chief executive offered free box tickets to her Liverpool-mad son when he read the heartbreaking story.

Tanya, 36, from Bolton, Greater Mancs., says her son has a smile on his face again ahead of his birthday thanks to the kindness of thousands of people.

She said: “He is loving it, he is so happy. It restores your faith in humanity.

“I’ve had thousands of messages on Facebook, I try and answer each one. It’s fab.

“All the cards are just as nice and kind as the next. His favourite present so far has got to be his gaming headphones and Xbox game from someone in LA.

“He has just had a card from the Doctor Who production, he’s had cards from football clubs, supermarkets.

“Rhys has not been able to wipe the smile off his face. He’s been so happy.

“Everything is in the living room at the moment. Twenty-one boxes were delivered on Saturday and I’ve only just been able to shut my front door.

“We have received about 7,000 cards just today (Saturday). We got three-and-a-half thousand on Friday. I can only just see my living room floor.

“He is opening each card and reading it, and he’s got his friend opening them too. He is taking his time with each one which is why it is taking so long.”

Since Tanya first made her appeal, Rhys’s story has gone international – with some of the cards arriving from the other side of the world.

She has also been contacted by a number of organisations who want to do something nice for Rhys, including Bolton Wanderers FC, who have asked him to act as a mascot.

Tanya added: “It’s gone worldwide. He’s been on the telly in Chile. He got a card from Qatar today and loads from America. It’s just gone everywhere.

“I just want to say thank you. That’s all I can really say at the moment, I’m so overwhelmed by it all.”

At birth, his carers, mum and dad, Mark, 48, had no idea whether he would ever reach his teenage years.

The condition causes Rhys’ skin and internal tissue to blister at the slightest knock or rub, leaving him with painful open wounds.

He is now reliant on a wheelchair as he is unable to straighten his legs due to the fusing of the skin at the back of his knees.

His frail body is covered in bandages, which have to be changed three times a day to prevent him from developing any deadly infections.

The pain is so severe that he even had to take morphine to try and control it while his family are unable to hug him.

He is unable to play outside with friends, go on holidays, attend birthday parties and even go shopping in public with his family.

He also has to be fed through a tube as eating solid food can cause his gullet to blister.

The family have done similar appeals before, gathering Christmas cards from Bolton residents to decorate the house and cheer up Rhys.

Last time he was treated to hundreds of festive wishes and loved getting each one in the post.

The skin of those who have DEB is more fragile than normal. Minor injury causes blisters which often leave scars when they heal.

DEB is not an infection, it is not contagious and it is not due to an allergy.

There is currently no cure and treatment focuses on tackling the symptoms, providing pain relief, and preventing infection.

It is caused by faulty genes which produce collagen, a strong protein in the fibres that hold the skin together.