David and Elina Kerry found the baby pigeon in their garden after it had been abandoned by its parents when its nest was blown from a tree and were determined to look after him until he was strong enough to survive in the wild. 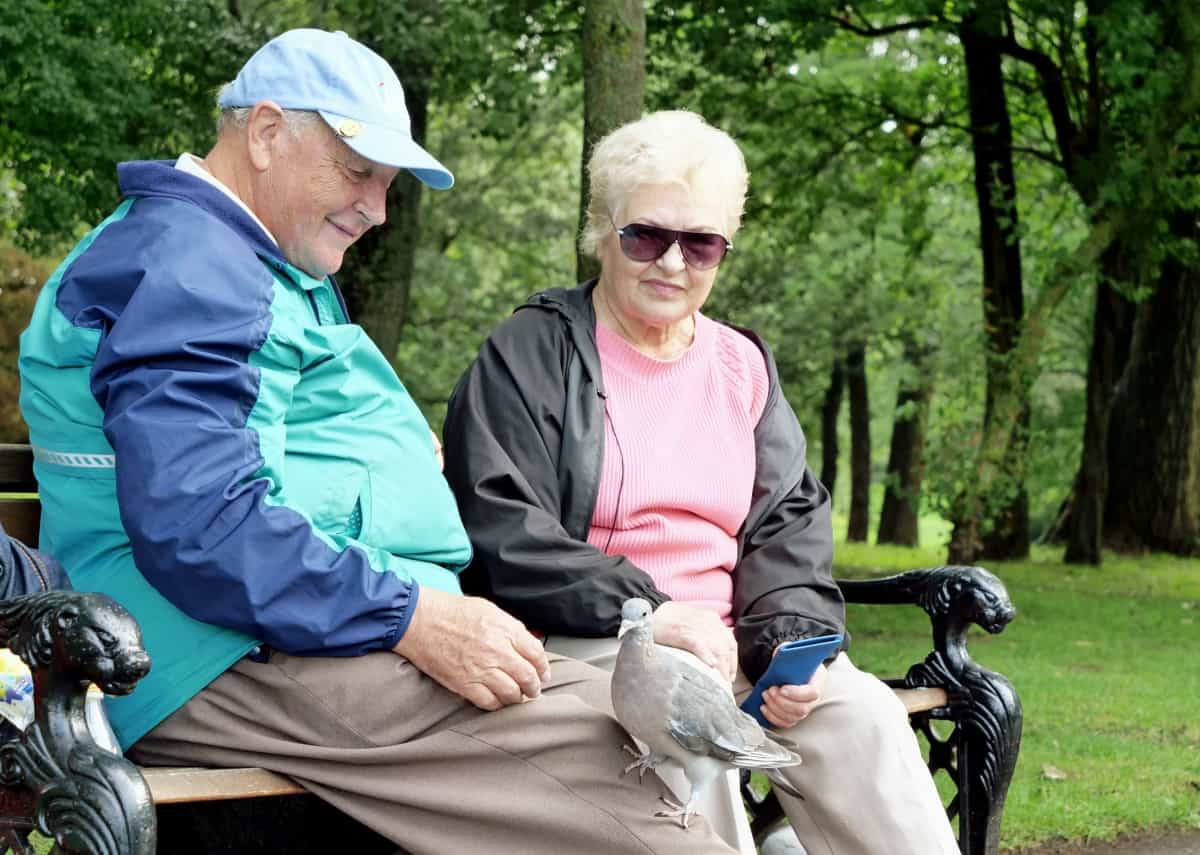 A retired couple have struck up an unlikely friendship with a pigeon they hand-reared since he was five days old and which visits them every day in a nearby park.

David and Elina Kerry found the baby pigeon in their garden after it had been abandoned by its parents when its nest was blown from a tree.

The couple were determined to look after him until he was strong enough to survive in the wild and fed the bird, which they named Pooper, a mixture of Weetabix and hot water to get his strength up.

After five weeks, David, 75, and Elina, 78, released him in a local park which they now visit every day and get his attention by tapping the side of a bowl when they arrive.

The retired engineer said: “It’s a lovely relationship. It’s beautiful. We go to visit him every day at around the same time.

“Sometimes he’s sat there waiting for us on the bench. Other times, he’s sat in the trees and we call his name and he comes flying down to sit with us.

“He sits on us and we feed him. Sometimes he follows us back to the car and walks along with us in the park.

“We will continue to visit him until he stops coming.”

The couple first came across Pooper at the end of May when his nest was blown from a tree and landed in their back yard.

Speaking about his chosen name, David said: “We named him pooper for obvious reasons.

“We were following him around the house with toilet paper because he was pooping all over the place.”

He added: “My yard is 95 per cent hard paved, but I have a strip of land with flowers. I was taking some spring bulbs out that had died and I left the ground quite rough.

“I went to level it that afternoon and there was this bird in the hole where the bulbs had been.”

David and Elina’s neighbour tried to return the nest back to the tree, but could not put it back in the right location, so Pooper’s parents abandoned him.

The couple researched online how to take care of a baby pigeon, known as a squab, and decided to hand-rear him until they felt he was strong enough to fend for himself.

David added: “I read that you could feed it Weetabix for a few days and it would be ok. But you can’t give birds milk, as they are lactose intolerant.

“So I made a porridge mixture with the Weetabix and hot water in a bowl. The next day I went to get some proper bird food from a pet shop.

“I didn’t know that a pigeon put its beak into its mother’s mouth and its mother regurgitates food into the baby’s mouth.

“I cut a water bottle and cut the finger of a rubber glove to go over it like a baby’s feeding bottle to replicate what a mother would do in its nest.

“It put its beak into it and started eating merrily. I was making his porridge mixture in a bowl and he heard the tinking of the spoon in the dish.

“His wings started flapping as he knew it was feeding time.”

David, from Blackpool, Lancs., and Elina kept Pooper in a makeshift nest made of a towel in an open butter tub for the first week and fed him every hour.

Within a week, he had outgrown the tub and was transferred to a shoe box.

After two weeks, the couple moved him to a two foot square box, where he stayed for the next three weeks until he was ready to fly the nest.

David added: “We had a bowl which we used as a bath for him. He would flap merrily in the water and he loved that.

“It was just like a human baby would do in a bath. We would come upstairs to bed and he would fly up and sleep on the landing outside the bedroom.”

When Pooper began to waft his wings more forcefully, David helped him to take off by holding him in his hands and thrusting him skywards.

David added: “Five weeks after he came into the house, he could fly up the stairs and land in places I couldn’t get to.

“Everything he did was what he wanted to do. I never tried to push him into anything.

“He was never intended to be a pet, we just wanted to help him to survive. We kept him as wild as possible.

“Eventually I put him in a shoebox and took him to the park. We had a walk in the park and he flew off into the trees.”

David said he went back to visit the park later that night with wife Elina, 78 – and Pooper flew down to them.

Since then, the couple have returned twice a day visit Pooper, call his name and tap a bowl like they used to when he was a baby to get his attention.

David added: “He loves to listen to people talking. When he is sat with, his head turns from side to side as if he is taking in what you are saying.

“I was apprehensive about whether he would he survive in the wild, I don’t think he knew he was a pigeon.

“He had never seen another pigeon and had no contact with other pigeons, it was all new to him.

“By the way he sitting on my hand, I could tell he was nervous.”

David released Pooper in Stanley Park in the seaside resort, which he said has “more than 200 pigeons”.

And he hopes other people will take pigeons in if they find them stranded.

He added: “It’s a bit of a bird haven, that’s why I chose to transfer him to the park.

“If people do find one in their garden, I’d encourage them to try to hand-rear them and look after them as best they can as not a lot of organisations want to take pigeons in.”

Elina, who refers to Pooper as “the baby”, said: “We spend two hours with him in the park when we go to feed him because he doesn’t want to leave us.

“He walks after us and follows us to the car.”